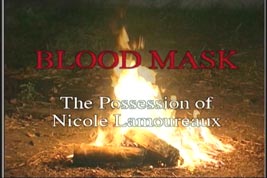 The Case For: It's like a Curse of Lizzie Borden reunion special!

The Case Against: Everything, just... everything. Pick a random bunch of negative-sounding words, and I can promise you they're applicable to this movie. 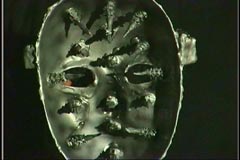 Blood Mask, baby Blood Mask!Normally I like the pin the failings of a movie on its director, and Dennis Devine will definitely take his share of lumps before this is through. However, screenwriter Kristin J. Johnson is the real villain of this little tale. For an example of what I mean, we need look no further than the opening lines of the movie. Blood Mask begins with title cards that appear on screen to tell us that this is Cambrai, France, and it is 1491. The first line of dialogue in the movie, spoken by a young nun in training, is, "This is Cambrai, France, 1491." It takes a special kind of suck to insult the audience's intelligence so profoundly in under thirty seconds, and Blood Mask has it to spare.

The opening scene centers on Genevieve, a young nun who really, really loves Satan. She's not possessed, she's not insane, she just thinks Satan is tops. This does not sit well with the Father in charge of her wellbeing, so he decides that the best thing to fix her unhealthy obsession is a hearty dose of Christian love, in the form of an excruciating death. The role of "excruciating death" will be played by the BLOOD MASK, an iron mask with lots of pointy bits on the inside that cause the wearer to bleed to death if the mask is held in place long enough. "Long enough" can mean minutes, hours, or instantaneously, depending on what the story calls for at the time. Before the Father can put the mask on Genevieve, though, she bites him on the arm and claims that she has just passed a curse to him that will endure throughout his descendants for generations. He calmly reminds her that he is a priest, and does not see many kids in his future, then BLOOD MASKS her like it's his J-O-B, which it is. 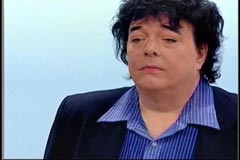 This guy is the scariest thing in this, or any other movie.Flash forward to the present day, as indicated by the presence of modern delicatessens, skateboards, and the title card that says "Present Day." We find ourselves in a college classroom, presided over by Professor Frank, played by Randal Malone, the man who brought his particular brand of creepy and ugly (he calls it "crugly") to his role as the Lizzie Borden-obsessed museum curator in The Curse of Lizzie Borden. Now, it's true that The Curse of Lizzie Borden also begins with a flashback to an act of violence in bygone days, followed by a modern day college class populated by sluts, whores, and idiots, but that could describe any movie. For Blood Mask to really rip off its more historically-grounded cousin, one of the students would have to have some sort of psychotic episode which makes her the most likely candidate to be the killer. Oh? You say that's exactly what happens? Well, why don't you write the rest of the review, Mr. Smart Guy?

The predictable breakdown comes from Nicole Lamoureaux, which would indicate that she's the killer-to-be, even if the title of the movie didn't already give it away. Hallucinating that her boyfriend, Derek, is bleeding from every facial orifice, Nicole leaps up on her desk in shock. In the real world, what happens is that she jumps up on her desk, has a little seizure, and then tries to bite Derek's neck. When she is calmed down, she apologizes for the disruption by calling her classmates "bitches and whores." Granted, they are, but it still doesn't go a long way to explain Nicole's confusion about why nobody likes her. Top on the list of Nicole's detractors is June, a Russian blonde who enjoys spending every waking moment outside of class as a submissive in the thrall of a dominatrix who is evidently training her to take on her own bondage slave. Yes, that's right, in a movie about haunted houses and demonic possession, there is a subplot involving a lonesome dom and her search for a sub. 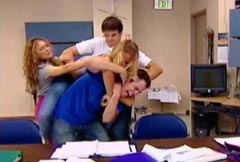 Woo! College!Nicole is suspended for a week for her disruptive behavior, which seems a little harsh considering it was a seizure, and even moreso considering that her classmates, teacher, and school are all aware that she has these seizures regularly. Evidently Nicole has been diagnosed with post-traumatic stress disorder, although the traumatic event in her life that brought her to this state is never explained. The people in her class who tolerate her - including Danielle De Luca, who played the murderous college student in The Curse of Lizzie Borden - all agree that Nicole has had a difficult life, but again, these difficulties are never explained beyond the fact that she is a preacher's daughter. Her dad, played by Lizzie Borden director Ford Austin, grounds her for getting in trouble, but that doesn't stop Nicole from sneaking out of the house. 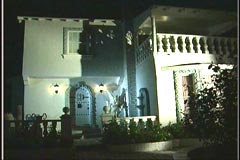 Same damn house.You see, Nicole and her friends have plans to spend the night in the old Montfort place, a creepy old mansion that is neither creepy, old, nor a mansion. It's a big enough house, certainly, but not a mansion. What it is, however, is the exact house that is used as the Lizzie Borden museum in The Curse of... well, you know. And when I say "exact house," I'm not messing around. The décor is the same, the furniture is the same, even the easily-accessible murder weapons are the same. The only thing that is different about the way the house is used in this movie is that we never go into the back yard. After all, that would necessitate a shot revealing the existence of a back door, and while an audience can swallow the front door locking on its own, and all the windows locking on their own, having a back door lock on its own? That's just crazy.