If you can't guess what happens from here, then I have to assume that you are either a newborn infant or an alien from another planet. In either case, welcome to Earth. Please help yourself to a shitty movie. 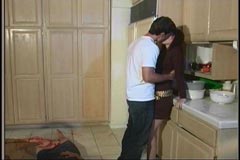 This image depicts Justin cheating on his girlfriend next to the corpse of their friend. Lovely.Chandra's body is discovered, prompting everyone to try to leave, only to find that the front door and windows are all locked, the phones are dead, and none of their cell phones have service. It also comes out that the house was an insane asylum before Mrs. Montfort bought it, which seems like the sort of thing that would have come up during the ghost story portion of the evening. It's also fucking ridiculous, since the house couldn't be more than thirty years old, and it could have housed all of six inmates, tops.

As the night progresses, Nicole keeps vanishing and reappearing at different points in the house, which would be suspicious if not for the fact that, thanks to Dennis Devine's laughable direction and some appallingly bad editing, it seems like everyone else does it, too. But Nicole is the only one who does it as part of the plot. At times, the hoodie-clad figure appears and reveals itself to be the spirit of Genevieve, the girl who was killed in 1491. She might explain more, but the voice modulation used to make her sound "scary" makes her utterly impossible to understand a good ninety percent of the time. 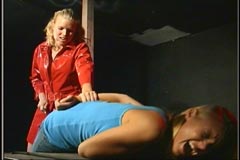 Eventually, all the remaining students get tired of teleporting around the house pointlessly, accusing Nicole of being the killer any time they manage to actually find her, and then taking it back when someone points out that she's had a rough life, what with being a preacher's daughter and all. Nicole herself makes a pretty sorry case for her innocence, with her only defense being, "I didn't do anything. I don't even remember half of today!" Yeah, because nothing says "I'm not a maniac" quite like admitting to frequent blackouts and memory loss. 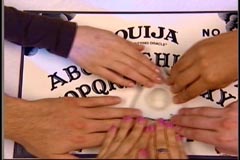 This is a major plot point. I hate this movie.In order to determine the killer's identity, they all go to the office and bust out a Ouija board, the ultimate detective tool (see? Board games? Foreshadowing?). The Ouija scene is a confusing mess, wherein the board first says that Annie is the killer, then changes its mind and says she's not. Before the board can identify the killer, who, I must remind you, is somebody in the room, they bog down the scene more by asking it questions about their love lives. Brilliant.

When the board finally identifies Nicole as the killer, she flips out and vanishes once again. Justin charges off to look for her, finds her easily, and is killed even more easily. He practically asks Nicole to BLOOD MASK him. Then Nicole uses her/Genevieve's psychic powers to incapacitate Derek while she BLOOD MASKS the shit out of Annie. See, Nicole is possessed by Genevieve, if you hadn't figured that one out. Emily chases Nicole for a while, then... stops to do other things, I guess. When she least expects it - boom! - BLOOD MASKED!

Hoodies are the devil's turtlenecks.Now it's down to just Nicole and Derek, or it would be, except that in the midst of all this BLOOD MASKING, Nicole took a moment to let her father and Professor Frank into the house, as they had stopped by to check on her. Why are they important, you ask? Well, Dad is a descendent of the priest who killed Genevieve (despite him not having kids), while Professor Frank just happens to be the last living member of the Montfort family, who are descendents of another priest who was there, which means that he is somehow also cursed and... you know what? It doesn't matter. While Frank and Derek hold Nicole still, her father performs an insta-exorcism, because, as it turns out, it was Satan, not Genevieve, who possessed Nicole. I guess. In any event, it works.

We find Nicole and her father in a hospital, where she has once again been diagnosed with post-traumatic stress disorder. Don't worry, though, the doctor knows the perfect treatment.

Doctor: "I could give her medicine, but I feel she might benefit more from counseling. With medicine, of course."

Derek, Frank, and Nicole's father meet up to discuss what happened. They all agree that they need to protect Nicole. Sure, don't worry about the fact that she killed like eight people. Derek says that he told the police that the gardener who "killed" Mrs. Montfort escaped from his mental hospital, came back to the house, and killed everybody. Sure, the asylum should be able to verify that the guy never left his room, and sure, there is no DNA evidence to support that theory while there is tons to suggest that Nicole did it, and sure, this would be wrongly convicting the gardener of a whole slew of horrific murders, but hey, who cares? He's Mexican!

Finally, Nicole is released from the hospital and she and Derek reunite for the first time since that horrible evening. Naturally, she BLOOD MASKS his ass.