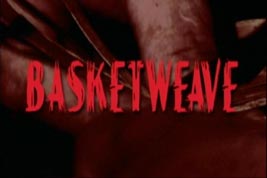 Overview: After witnessing the murder of her parents, a girl ends up in a mental institution where she is the victim of abuse and medical experimentation. Or is she? Meh, either way.

The Case Against: More totally pointless twists than you can shake an M. Night Shyamalan at!

If you had asked me only days ago what I thought the most reliable word in horror film titling was, I would have confidently declared in a strong, authoritative baritone that it was "basket." Basket Case, Basket Case 2, Basket Case 3, Basket Case 20th Anniversary Special Edition - all classics of the horror genre (except for Basket Case 2 and 3). But my faith in all things basket has been shaken to its very core by the subject of today's review, a slasher/psychological thriller hybrid called Basketweave. I say "slasher/psychological thriller hybrid" because "movie that can't decide what the fuck it wants to be" doesn't sound as classy, and the Greasmeister is all about the class. 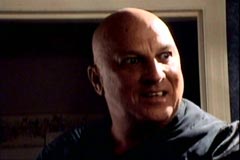 Man, the camera is not kind to Tom Colicchio.Basketweave begins promisingly enough, with a cozy suburban family having an unexpected visit from a serial killer who calls himself, you guessed it, Basketweave. Well, technically the movie begins with opening credits, which are notable only for the fact that writer/director/composer Christopher Forbes actually wrote a "Basketweave" Gregorian chant to accompany them. It's pretty much the best shitty movie theme song since Skullduggery. Anyway, Basketweave (the killer, not the movie) is a big, bald lunatic with a raging hard-on for wicker baskets, which, as obsessions go, is about as menacing as being fascinated with mangoes, except that I suppose you could fill a sack with mangoes and it would actually have enough weight to do some damage. Fortunately, Basketweave does not take his chosen theme so seriously as to actually try to kill with baskets. At least, not in this scene. In this instance, he prefers to kill with his bare hands, or more accurately, with things found laying around the house. Ol' B.W. gets into a tussle with the man of the house, during the course of which it is revealed that Basketweave is the man's brother. This relationship seems like the sort of thing that might be important, but its relevance lasts about as long as the injury that Basketweave receives when his brother stabs him in the ear with a piece of broken glass. To clarify, his ear is totally fine twenty seconds later. Of course, in that twenty seconds, he manages to kill his brother and cut the head off of his sister-in-law.

That just leaves little Ally, who, at ten years of age, is far too young to be subjected to a scene of such horror. That is, if she really is ten. She might be twelve. This is matter of some debate throughout the movie, and it seems to alternate from line to line. Now, the difference between ten and twelve might not seem like a huge distinction. Certainly there's no age at which it is appropriate to see your parents murdered by your psychotic uncle, who is evidently so far removed from sane and polite society that his own brother calls him by his serial killer name, and not his real name. But beyond that, the difference between a ten year old girl and a twelve year old girl is pretty massive. One is a sweet, innocent little fourth grader whose biggest concern in the world is whether she likes ponies or unicorns better. By twelve, that same girl is a foul-mouthed, disobedient, pissy little middle schooler who wants nothing more than to hang out outside the Hot Topic at the mall and wish her parents would just die already. Of course, there's a big difference between wishing one's parents were dead and actually seeing one's mother's head torn off, and like I said, that would be enough to traumatize someone at any age. So my point here is not that Ally should be more or less screwed up by the death of her family, but rather that we're dealing with a movie that didn't have the wherewithal to keep track of this one simple number. 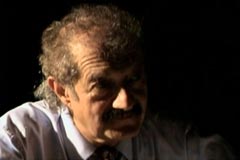 Dr. Stravinsky: the mind of a genius, the hair of an old Jewish redneck.In any event, Ally hides in the laundry basket in the bathroom during this whole ordeal, which keeps her safe from Basketweave long enough for the cops to arrive and escort him back to the Ravenwood Psychiatric Hospital. In his confession to Ravenwood's head honcho, Doctor Stravinsky, Basketweave gives us a glimpse into his personal philosophy. "Doctor, I'm a weaver. I weave reality out of blood and straw." I would make some snarky comment about how he should be called Basketweaver, then, but I can't do it. I'm too transfixed by the phrase "blood and straw." For years, I've been searching for a name for my band - a loving, yet shoddy tribute to Earth, Wind, and Fire - and now I have it. Look for Blood and Straw coming to gently rock low-level venues near you!

Dr. Stravinsky is an amazing doctor. Not only is he capable of being the personal shrink to a basket-obsessed psychopath, he's also able to care for his shattered victims! Ally is essentially catatonic after witnessing her parents' murders, but Ravenwood is happy to have her. Personally, I would think that someone whose psyche has just been shattered by seeing their parents violently killed would probably not benefit from being housed in the same facility as the guy who did the violent killer, but that's why I'm not a medical wunderkind like Dr. Stravinsky. Also, I don't have his impenetrable German accent.

Stravinsky starts Ally on an experimental drug of his own devising called Margaret, named after his dear departed wife. I know that seems like he took the whole naming thing a bit too literally, but don't worry, his wife's name was actually Margrafinil. This new wonder drug is so effective that, ten years later, Ally is& still catatonic. In fact, all of the patients under Stravinsky's care (there are three of them, and no, Basketweave isn't among them. He basically disappears from the movie for a while) are on high doses of Margaret, and have been for quite some time. None of them are any better than when they started. This new wonder drug of Stravinsky's hasn't actually helped anybody. The only success that Stravinksy can claim is that he has invented a medication that can be administered either as a pill or as an injection, depending on what the story calls for. Suck on that, Zoloft! When's the last time you changed your form for narrative convenience, huh? 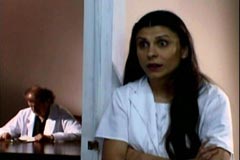 This is Jaqui. Commence hatred.Although the medication may not be effective, Ravenwood is still a modern day medical miracle. With only three patients to be found, Ravenwood has two doctors, three nurses, and however many security guards a scene calls for. Of course, neither of the doctors and only one of the nurses ever lays eyes on a patient, they can still expect the same shitty care you'd find in any hospital with a more normal patient-staff ratio. The nurse who actually spends time with the patients is named Jaqui. She is the devil. In the five years she has worked at Ravenwood, Jaqui has taken full responsibility for administering medication to the patients, and since no one in this psychiatric hospital is an actual psychiatrist, that means she's the only one who actually interacts with the patients at all. Unfortunately for Ally, Stereotypically Agitated Mental Patient, and Stereotypically Passive Mental Patient, Jaqui's bedside manner kind of sucks, much in the way that the Holocaust was kind of unpleasant. Jaqui routinely subjects the patients to physical abuse and humiliation. She's like Nurse Ratched, without any of the subtlety or pretense of doing horrible things for the patients' own good. In other words, she's a bitch.