Overview: Three friends embark on a journey to score at Spring Break, but find only zombies and fart jokes.

The Case For: Thumbs its nose at a franchise that needs a good nose-thumbing.

The Case Against: It's a horror comedy spoof that is neither scary, funny, nor a spoof. That's a bad start.

Unless you've been living in a cave with your eyes shut and your fingers in your ears for the last decade, you've seen commercials for the Girls Gone Wild videos on TV, in your email, in magazines, and in your most irritating nightmares. You may have even seen one of their ninety-minute jigglefests, which bombard the viewer with one image after another of drunk girls being talked into lifting their shirts for the promise of a t-shirt. I believe it is meant to be a comment on the irony of girls who already have perfectly serviceable shirts baring their chests in exchange for shitty new shirts. Either that, or it's a vast homosexual conspiracy, since fifteen minutes of one of these mind-numbing, boner-deflating videos is enough to put a guy off boobs for good. You may have also heard that Girls Gone Wild entrepreneur Joseph R. Francis is complete scum, a kiddie-groping sexual predator, and probably a C.H.U.D.

All of this is true, and explains why I feel the Girls Gone Wild series is more than ripe for parody. When I saw that a movie called Zombies Gone Wild had taken the premise and said, "Sure, we have bars full of girls willing to lift their shirts to give us a peek at their dirty pillows and lack of self-esteem, but what if the girls were actually zombies?" I was ecstatic. A great, campy, cheesy, horror spoof that gives a big middle finger to Girls Gone Wild sounded like a fantastic idea. At least in theory. 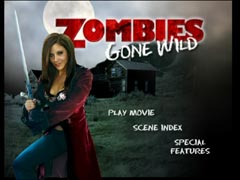 LIES!Then I thought about it. How would that actually play out? How could they make that funny and keep it up for an hour and forty minutes? The answer, of course, is that they can't. No one can. So I suppose I should give the mysteriously named G.R. and the Zombies Gone Wild crew some credit for not trying to do that. But I can't, because they did. Right there on the DVD, it says it's a "horror spoof of the 'Girls Gone Wild' flash fests." That's lie number one, thrust right in our faces like so much boobie.

For lie number two, you have to actually play the DVD. The menu screen features a hot chick holding a sword. Showing a fan of campy horror a hot chick with a sword and then failing to deliver is like telling a bacon lover that you're made of bacon, when in fact you're made out of rancid Beggin' Strips. And yet sure enough, as Rudyard Kipling once said, "Chick is Chick, and Sword is Sword, and never the twain shall meet." There is no hot chick holding a sword in this movie. In fact, a chick and a sword are never actually in the same shot.

To be fair, while Zombies Gone Wild may not be a spoof of the Girls Gone Wild franchise, it is a spoof of the "guys looking to score get more than they were bargaining for" horror trope. Unfortunately, they go a little overboard. Have you ever ordered some delivery, but instead of a pint of shrimp fried rice they bring you the quart, and then you get stuck paying for the extra, and you can't finish it all, and you're afraid the shrimp is going to get nasty so you just toss the rest? Zombies Gone Wild is like a metric ton of nasty shrimp, and we've been stuck with the bill. 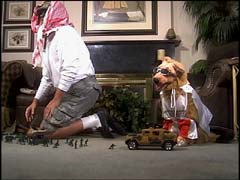 The two strongest male influences in Marty's life.To proceed any further, we must get to know our protagonists, and to know our protagonists is to hate them. First there is Marty, who, like every Marty in every horror movie ever (see: Slaughter High, The House that Screamed), is a complete loser with absolutely no knowledge of how the world operates. He plays up the nerd stereotype beyond the boundaries of humor to the point where one has to wonder how this guy finds his pocket protector in the morning without having an asthma attack, tripping over his Star Trek figurines, and fatally impaling himself on his chess club trophies. It doesn't help that he looks like somebody squeezed all the juice out of Henry Rollins. We get to know Marty as he prepares for a road trip with his two best friends. First his mother babies him obnoxiously for a few minutes in a scene that might be funny if it wasn't way too long. Then he has a man-to-man conversation with his father, a crazed Vietnam vet who likes to paint his face with camouflage and play with army figures while farting and obsessing over dog poop. Hilarious, right? Isn't that just so wacky? Marty's dad basically tells him about the birds and the bees by instructing him to stick his pecker into anything remotely resembling a mammalian orifice, then send him off with a mysterious burlap sack. The burlap sack is the one and only bit of foreshadowing employed by this movie, so drink it in. 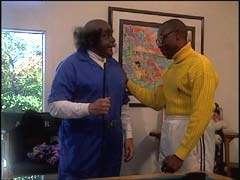 This might be a touching moment, if the guy on the left didn't have dog poo in his pocket. But he does.Next, there's Leroy (alternately pronounced the way it looks or "Leh-ROY," depending on who's saying it). Leroy is the token black guy, a tennis star and a would-be lawyer who is nonetheless determined to out-nerd Marty. However high Marty can hike his pants, Leroy can hike them higher. However blissfully ignorant Marty can be to the social workings of the world, Leroy can be more. And however batshit insane and totally unfunny Marty's dad can be, Leroy's dad can be worse. Marty's dad at least sticks to one theme - the psychotic former soldier shtick, played to a degree that would make the residents of a veteran's hospital get up and walk again, if only so they could beat him like an old rug. Leroy's dad is all over the place, switching between stereotypically gangsta, stereotypically Indian, and stereotypically Mexican accents between each line for no reason at all, talking about whatever crosses his mind. He's like Robin Williams if someone switched his coke for enough PCP to kill an unfunny rhinoceros. Oh, and he also likes to fart and play with dog poop. That's also hilarious, right? Isn't that also just so wacky? How do they come up with this stuff?