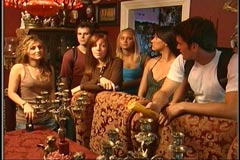 Would it have been that hard to find a house that doesn't make me want to pull my eyes out?Now would be a good time to familiarize you with the group of college students who will be staying the night in the "creepy old house." Of course, there is Nicole and her boyfriend Derek, who is such a good guy that he doesn't mind that Nicole is a preacher's daughter and won't have sex before marriage. Of course, if he can overlook her choking him in the middle of class, a little thing like abstinence shouldn't be too hard. Then there's Justin, who is essentially the boyfriend of all the other characters. He's a shameless slut who is only marginally in a relationship with Annie, another cadaver-to-be. Justin is also the object of lust for Emily (Danielle De Luca) and their token minority friend Chandra.

Lest you think that these six nubile coeds are at this abandoned house for no good reason, let me assure you that screenwriter Kristen J. Johnson has thought of all the angles. You see, they have every reason to be there, as Justin is the paid caretaker of the old house, which has been empty for years. I defy you to find any holes in the explanation that some unidentified person has paid a random college kid to look after this empty piece of prime real estate in Southern California for the last few years. Defy, I say!

All of the college kids are annoying, but Justin takes the cake. His guided tour of the house is one of the most painfully stupid scenes I've ever sat through, beginning with the insightful explanation, "This room is called... the foyer." Justin proceeds to show his friends around, taking every conceivable opportunity to make a comment about how a room can be used for sex, followed by humping motions. Well, except for the office, which, "has a table, so you can play board games later." Foreshadowing? Sadly, yes.

Justin mercifully concludes his tour, which really would have only been useful to people who have never been inside a house before, and Annie hands out homemade burritos. I know we're all eager to get to the killing, but I feel I must point out Justin's reaction to these burritos:

"Let's get the munchies like Shaggy and Scooby-Doo! Zoinks!" 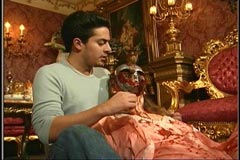 "If I pull this mask off you, you promise not to frame me?" "Uh... maybe."Of course, no stay in a haunted house would be complete without a good ghost story, so Emily proceeds to tell the tale of the house's owner, Mrs. Montfort, which is then acted out in a convenient flashback. It seems that Montfort had a cheating husband, and she decided to get back at him by having an affair with the gardener. The only thing was, she was so sinfully ugly that the gardener kept ditching her. Fortunately, she was also having an affair with a plastic surgeon, who agreed to make a house call and do some surgery to improve her face, allowing her to successfully screw the gardener, thus getting back at her husband. Except that the plastic surgeon didn't perform the surgery as he promised. Instead, he shoved Mrs. Montfort's head into a BLOOD MASK and ran away. That should teach her to trust plastic surgeons who think that flannel shirts count as lab coats. Fortunately, before she bled to death (which only takes seconds if you believe other scenes in this movie), the gardener showed up to get some loving. He removed the mask in time to save her, but her face was so hideously mangled that he went mad and ended up in an insane asylum. Also, Mrs. Montfort died somehow.

It's a compelling tale, but it does beg a few questions, such as: why would Mrs. Montfort need to sleep with the gardener to get revenge on her husband if she was already sleeping with the plastic surgeon? Who in their right mind would think that delicate plastic surgery could be accomplished in a house call? How did the plastic surgeon get a BLOOD MASK, which just happens to be a perfect replica of the one used to kill Genevieve in 1491, and why would he use it on a woman giving him free sex? Why would the gardener show up for sex if the entire point of her surgery was that he was too repulsed by her to sleep with her? And perhaps most importantly, why, when Mrs. Montfort died, did her husband not take possession of the house?

After Mrs. Montfort died, the gardener was blamed for her death, and he remains in a home for the criminally insane to this day. Everyone seems perfectly content with this, even though the story just revealed that the plastic surgeon was the one who BLOOD MASKED her. I can't imagine it could have anything to do with the fact that the gardener is Mexican, could it? Hmm... 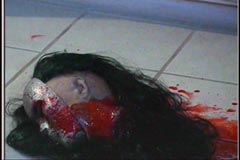 THIS IS A REAL HEAD. NOT A FAKE HEAD.After the story ends, Chandra and Annie go into the kitchen to talk about how weird Nicole. Suddenly, the lights go out, and a hoodie-clad figure appears behind Chandra. The figure sticks a BLOOD MASK on Chandra's face, causing one of her eyes to pop out. The figure then picks up a handy kitchen knife and slices off Chandra's head in one clean chop. Hey, what a shock, the minority died first!

Annie sees none of this, however, as she runs from the kitchen when the lights go out. They come back on momentarily, but she still seeks comfort in her boyfriend's arms. Justin uses the opportunity to try to have sex with Annie right then and there. When she turns him down, he plies her with sweet nothings, such as, "Hey, sugar plum, don't go sour on me."