22 minutes and 53 seconds into the movie, “Angel of the City” by Robert Tepper starts up on the soundtrack, leading into footage, shot out of a car window, of homeless sleeping on the LA streets with quick cuts (on the song’s opening drum beats) to silver robots with glowing eyes. 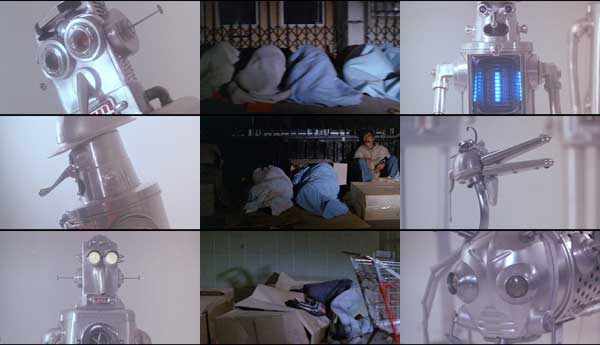 This is the Cinema.

The context given seconds later, that these robots are part of a fashion shoot featuring Ingrid (in a series of horrible wigs,) dismisses some questions (“Where are the robots?” “Will Stallone have to fight the robot uprising?”) but raises more in their place (“Is this sexy?” ”What is that thing between its legs supposed to be?”)

The song ends, the lights go down on the robots, and a sinister electronic drone rises on the soundtrack. Cosmatos is trying to segue on the robots into the next scene, where the Night Slasher et al. are out slashing again. You have the option, though, of stopping the disc here and imagining the next hour is Cobra having to fight back as the robots take over the city. He’s bucking the system that binds his hands with bureaucratic “rules” that dictate the way robots can be dispatched. He saves Ingrid, but not before she’s Roboticized. In the end, he and the Night Slasher have to set aside their differences to wipe out the Metal Menace and create a real New World—where Cops and Psychos can finally live side by side.

You could also just click back to the last chapter stop and rewatch the robots/homeless people montage because it is possibly the greatest sequence that has ever appeared in any feature film.

STALK: She’s gonna wreck our New World. And the dream. You have to stop her.

Ingrid gets ambushed by Psychos who kill her photographer, Sledge Hammer. She goes to the hospital, where she gets attacked again because the Psycho cop Stalk tricks Cobra and co. into leaving her unguarded.

The morning after the hospital attack, Cobra puts Ingrid in his CobraMobile, a battleship gray 1950 Mercury that’s equipped with a nitrous oxide system. They must not have had the money to mount gun turrets on the front, because there’s no way they didn’t want to. Cobra’s license plate: AWSOM 50.

The Night Slasher gives chase and the CobraMobile weaves through highway traffic, flies over hills, smashes through the upper wall of a parking garage, sails between exploding gas tankers, flips around 180 degrees to drive backwards while Cobra shoots at the Psychos behind him, and nearly decapitates Santa. When the CobraMobile finally crashes, Cobra stumbles out to find the Psychos have taken off. It’s not clear whether they assumed he died in the crash, or if they thought it wouldn’t be sporting to finish him off when he was probably badly wounded. 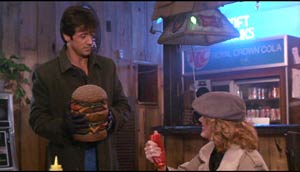 Cobra and Ingrid get out of the city. They fall in love while discussing the importance of murdering criminals. The Psychos follow them to a little town. After a requisite Rambo-style “gearing up” sequence, Cobra shoots dozens of identical guys on motorcycles.

The final showdown sees Cobra fighting the Night Slasher and Stalk in a fiery industrial facility. Cobra uses this opportunity to kill people in ways that are fire-themed. That match he’s had in the corner of his mouth for the entire movie gets thrown at a guy drenched with gasoline. They keep uncovered barrels of gasoline sitting around in their big flaming fire factory.

NIGHT SLASHER: Let’s bleed, pig! Where are you, pig? I want your eyes, pig! I want them! You want to go to hell? Huh? Huh, pig? You want to go to hell with me? It doesn’t matter, does it? We are the Hunters. We kill the weak so the strong survive. You can’t stop the New World. Your filthy society will never get rid of people like us. It’s breeding them! We are the future!
COBRA: No! You’re history.
NIGHT SLASHER: You won’t do it, pig. You won’t shoot. Murder is against the law. You have to take me in, if you can. Even I have rights. Don’t I, pig? Take me in. They’ll say I’m insane, won’t they? The court is civilized, isn’t it, pig?
COBRA: But I’m not. This is where the law stops and I start, sucka.

Cobra impales the Night Slasher on a hook and pushes him into a machine that kills him with a lot of fire. The Night Slasher screams and screams as he melts to death. I'm not clear on why he thought Cobra was just going to arrest him, since Cobra had been doing nothing but killing guys the entire movie.

Cobra is congratulated for a good job killing every single Psycho, down to their leader. The Dream is over. The New World of axe-clanging pools will never come to pass. Cobra gets to punch the slimy liberal type who’d been whining about him murdering criminals through the whole movie. He was written into the script so Cobra would have someone to punch at the end.

Cobra’s unremarkable partner, Gonzales, gets taken away on a stretcher. He was in the whole movie. He was meant to be comic relief, but he doesn’t do anything especially comical. The only characterization they gave him was that he liked candy bars. Note that this is Reni Santoni as Gonzales with an S, not Gonzalez with a Z, like in Dirty Harry. Also, be careful not to confuse Cobra with Harry Callahan, even though they have basically the same sidekick. Here's one way to tell the apart: Dirty Harry's movies made a lot of money.

After a 16 year absence, Sylvester Stallone is returning to his most famous role in Rocky Balboa (or, as those “in the know” call it, Rocky VI.) In 2007, Sylvester Stallone will return to his second most famousest role in the long-awaited (and unpretentiously titled) Rambo IV. It’s been two decades now and we haven’t seen so much as Cobra II. Stallone should call me if he needs script ideas, I’ve got a vague outline that’s set in Vegas and the bad guys have a monster truck.

Remakes are a Big Deal right now, but I just don’t see that happening for Cobra. For one thing, it was a big box office bomb in ‘86. Also, as the intro said, it was based on a novel—-Fair Game by Paula Gosling. Fair Game, starring William Baldwin and Cindy Crawford, hit theaters in 1995. Someone has already made a remake of Cobra. I don’t know why you’d watch it though, it doesn’t even have fuckin’ Cobra in it.