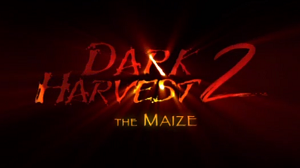 Overview: A hogshit-crazy psychic dad and his two shrill, annoying daughters lose each other in a tiny corn maze for 9 hours even though they're all standing about 20 feet apart screaming at the top of their lungs the whole time. For some reason this qualifies as a movie.

The Case For: The title "The Maize" is a stupid pun which is stolen blatantly from the name of the corn maze they shot the movie in. This is a positive feature, because it provides an early warning that you should stop the DVD immediately and throw it into a cement mixer.

The Case Against: This movie is also known as Dark Harvest 2, which makes it a sequel to murderous scarecrow flick Dark Harvest in the same way that Troll 2 was a sequel to Troll, which is to say that it isn't. 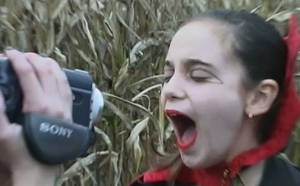 Trillaphon: Before we get started, we solemnly swear up, down and sideways that everything you're about to witness is from a real movie, and we haven't been wildly applying video plugins and near-subliminal jump cuts just to make Bill Cowell and company look bad.

Trillaphon: Oh no, not that movie! They say Crazy Old Man Bill Cowell lives in that movie!

Trillaphon: Yep, went mad from all that corn, I reckon.

Hydrogen: They should have just shot this movie in the two-foot-high corn maze for toddlers, it would have been about as scary and made exactly the same amount of sense.

Hydrogen: The urgency and dramatic tension of psycho-dad's tearful search for his daughters is sort of ruined by the fact that they're just standing there screaming at each other within earshot multiple times, and they still can't find each other or leave the corn maze.

Trillaphon: Remember kids, if you own and operate a corn maze, make sure you never owe a favor to anybody, or they might call it in to make a shitty movie on your property. No favor is worth having this as publicity for your corn maze:

Trillaphon: I figured it out, this is a new avant-garde blend of high cinematic art, cinema irrité. The artistic goal is to make anyone who watches it as pissed off as humanly possible. It's like John Cage's 4'33" as presented by Ed Wood, which is fitting because based on Bill Cowell's filmography he's trying to become Ed Wood as hard as he can.

Hydrogen: I was just going to go with "cornography".

Hydrogen: You're not helping.