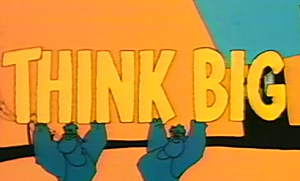 Overview: A pair of musclebound, brain-damaged identical twin truckers carry a load of toxic waste and a child prodigy with a magic remote control from Montana to California in a series of escapades that are about as thrilling as actually driving from Montana to California with the two dumbest people you've ever met spewing sub-human banter in your ear the entire time.

The Case For: You can pass the time by trying to figure out which brother is supposed to be the stupid one (spoiler alert: they're both the stupid one.) 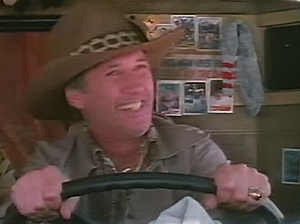 Yes, it's finally time for the triumphant return of the Barbarian Brothers! You didn't think that their raging stupidity and rippling, shirt-repellant physiques could possibly stay contained in sweaty barbarian purgatory forever, did you? We're confident nobody ever gave a second thought to typecasting the Paul bros as actual barbarians, mostly because they're obviously too fucking stupid to have credibly survived more than six hours in a medieval fantasy wasteland. But in 1980's California, their staggering incompetence and lame jokes blend right in. And so began a glorious and mercifully short career in which David and Peter Paul, aka the Barbarian Brothers, delighted audiences almost nowhere with their acting range, playing everything from:

Don't worry, though, the Brothers Imbecilov still find the time to get back to their barbarian roots by throwing us the worst fight scene since the last time they had a fight scene in Think Big:

Think Big really is an appropriate title, at least in the eyes of the production team, because it's pretty obvious they were expecting a major franchise to be started here. They were dead certain that this movie was going to be bigger than '80s Jesus and the Funky Bunch combined. To ensure their commercial success, this movie was jam-packed with....well, they couldn't really afford "stars" for this outing, per se, but how about some "people you've heard of", especially if you're a shitty B-movie aficionado? Michael Winslow has a cameo we can only summarize by saying it really, really seems like they just accidentally stumbled into him in a diner trying to get a shortstack somewhere and forced him to do an uneventful and uncomfortable 90 seconds in their movie, and it's all downhill from there with 'Tiny' Lister, Jean-Claude Van Damme('s ex-wife), and both Richard Moll and Richard Kiel, together at last in all of their towering, statuesque glory.

All of those people spend about five minutes combined on screen, and when they do appear we wouldn't say they're doing any "acting" in the traditional sense, but at least they lent their glowing presence to the proceedings. And how could we forget the omnipresent David Carradine, who as far as we can tell is completely shithoused for the entire movie IRL[1]. We can sympathize, because we'd show up hammered every day too if we found ourselves appearing in a Barbarian Brothers movie, but we will say that spirits do not seem to improve David's acting chops - nor, even less surprisingly, his driving abilities - and so he ends up delivering a performance that we can only describe as "Clint Eastwood Dundee with a lipful of Skoal on both sides of his lockjaw."

[1] As opposed to Crime Zone, wherein David Carradine was most definitely stoned off his ass 100% of the time.