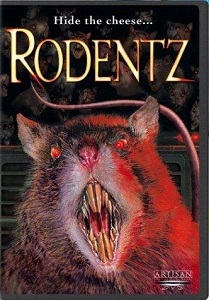 Overview: You should already know from the title that this is just a standard grade-F- horror movie about ordinary animals suddenly becoming bloodthirsty and killing off a bunch of thirty-somethings pretending to be perky co-eds. Although the fistfight with a guy in a giant rat suit at the end of the movie is a nice touch.

The Case For: If you can survive the non-stop generic tedium of the first 85 minutes, the last 5 minutes will make your day.

The Case Against: The rats in this movie are so incredibly non-threatening that if you're terrified of actual rats, watching Rodentz will probably cure you of your fear. Of course, you have to watch Rodentz all the way through, so it's still not worth it.

Before we even started it up, Rodentz was already giving us unpleasant flashbacks to Dogs, and it turns out there are some definite similarities. For one thing, both movies rely heavily on footage of cute, fuzzy animals sitting around and not doing much of anything to instill dread and terror in the viewing audience, which works about as well as you'd think. Rodentz also goes with the "threaten to make a sequel involving an even stupider animal" shocking twist ending, which is even more of an empty threat here. But for all their failures, at least the makers of Dogs weren't dumb enough to match cut really terrible footage of CGI rats back-to-back with the genuine article and hope nobody would notice. Also, there's the little matter of the guy in a rat/beaver/groundhog suit:

So just what the hell's the difference between your average household rodents and Rodentz, anyway? Well, for one thing, the latter seem to listen to a lot more SHREDDER, which is of course the adolescent mutant laboratory Rat Thrash band of choice on college campuses across contemporary white-bread adult America These Days. For another few things, nothing. There are some intriguing similarities that we think you'll find add to the nonstop heart-pounding horror-fuel carnage though:

3) Are sort of pesky/difficult to get rid of

4) Eat everything in sight

"Wait a minute," you're saying, "this sounds an awful lot like just a bunch of regular rats running around doing a bunch of regular rat stuff for 91 minutes...", and normally you'd probably be 100% right and smart as hell, but in this case you're actually wrong and a dumbass instead, because of reasons involving a guy in a giant rat suit beating a guy to death with his own torn off arm behind a dumpster before committing suicide via the worst parkjob in history. That last part? Easily one of the best endings we've seen since Dracula 3000, by the way. The rest of it, ehhh...not so much. But don't worry, we'll give you the broad strokes. Did someone say strokes?

SHREDDER! SHREDDER! SHREDDER! SHREDDER!The titular Ratzzz are solely the fault of one Professor Hubris and his rising star graduate assistant, Hoggish Greedly Jr., who seem to spend most of their time in the labnaseum getting rats jacked up for metal shows by mixing Ecto Cooler and Creepy Crawlers goop together in smoking beakers and creating glow-in-the-dark super serums for radicalizing snacktime or battling ear fungus aftertaste or whatever stupid bullshit it is they're actually supposed to be doing[1]. These are of course exactly the kinds of scientific pursuits one might expect to find being conducted after hours in the dank basement of their local university chapel, and as levitating chair of the Haunted & Abandoned Sciences dept., Professor Hubris is exactly the kind of scientist one might expect to find accidentally mixing up the chemical formulas for a miraculous cancer cure with, oh, say, something that transforms lab rats into giant flame-retardant homicidal kangaroos with Terminator vision and a thirst for human blood.

[1] Other handy research tools in the lab include the Science Claw (tm), which is of course the #1 chosen rat reprisal implement of vengeful scientists everywhere, and the standard-issue swirly bubbling test tubes full of Crisco and food coloring, which are carefully maintained at peak sciencitude just in case the Nobel committee happens to drop by for a surprise inspection.