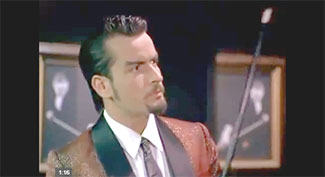 Yes, it's time for Charlie Sheen to take over the film, and with his entrance the movie switches gears to his favorite topic: how awesome Charlie Sheen is. Joe runs into him at a local billiards hall, where they quickly arrange a game for $1,000 a point. "Call me 'Fats'", says Charlie, marking the only time in his life that he's said that to somebody who he wasn't paying by the hour. "Fats" is the suave-est pool hustler in the universe, as evidenced by his smoking jacket, slicked-back hair and goatee, and single press-on silver fingernail. That last detail seems a little out of place, but maybe, just maybe, nobody but Charlie Sheen is cool enough to understand it.

Fats proceeds to kick Joe's ass up and down the billiards table while waxing poetic about how this was Samuel Clemens' favorite game - oh, I'm sorry, a plebeian like you may know him better as Mark Twain. We're pretty sure that if this scene was allowed to run its natural course it would have ended with Charlie pulling trick shots with his feet while explaining how he invented the cigar and bringing passing women to orgasm just by hip-thrusting in their general direction.

But alas, Charlie's eight-minute contract is up, and he exits the film in a towering inferno of self-absorption. On his way out, he tags in the next actor to take over the movie: Angus Scrimm, famous as the villainous "Tall Man" from the Phantasm series, who is playing Dr. Lyme, a man with a penchant for diamonds and a metal claw for an arm. Apparently Angus has always secretly wanted to star as a James Bond villain, and good old C.C. figured that would fit in just fine thematically with his con artist movie. Imagine how much better The Sting would have been if Robert Redford had a robotic exoskeleton! Joe reveals the real reason he came here to lose at billiards: He has some diamonds to sell. A deal is quickly reached, and they head out for a clandestine exchange with an eccentric Texan millionaire, a.k.a. Lou in a ten-gallon hat. 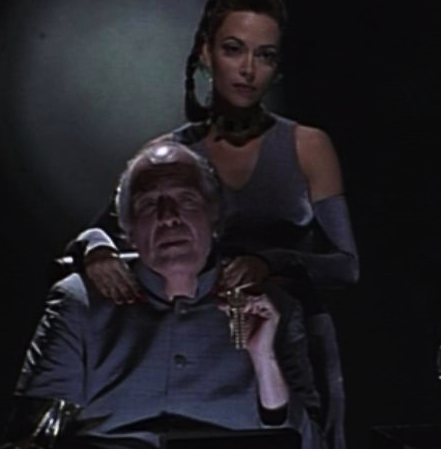 "Fetch me my white cat and my stroking jacket, Esmerelda! I have closed-circuit monitors to cackle maniacally at!"

The writer must have lost his copy of "The Big Coloring Book of Confidence Tricks: For Ages 4 and Up" at this point, because Joe and Lou's big plan is the exact same stupid fake police sting from the beginning of the movie that got Joe's dad killed, and which amazingly enough gets Lou killed this time around. Devastated by his continual failure to keep James Coburn alive, Joe runs off into the night in shame. He runs into Diane in a funeral getup, standing under a lamppost surrounded by pitch darkness and holding a single rose. The image is so overindulgently film noir that we're now certified private investigators just from looking directly at it. Diane runs off into a nearby building, where Joe finds none other than his very much alive (and extremely smug) father waiting for him.

That's right, it turns out that the entire movie has just been one big meta-con pulled on Joe. Gasp! It's just like the big reveal at the end of The Prestige, only it's terrible and uninteresting. Joe's dad takes the cash from the diamond scam and pays off his accomplices, including Diane, which immediately raises the question "what the fuck is she getting paid for?" The only thing she did involving Joe was to sleep with him. His dad goes on to brag about how "perfect" it was that Diane looked just like Joe's mother. "Gee, thanks Dad, a hooker that looks just like my mom! I had just run out of things to talk to my therapist about!" Joe and his dad close out the movie with a "suspenseful" "climax" on a merry-go-round, after which Joe finally walks away from his psyche-destroying father and the con game forever, like he should have fucking done five minutes into the movie.

Most of the blame for this film has to go to the director. The cast and crew of Deadfall is about as cohesive and goal-oriented as a bucket full of rabid skunks. It's clear who's in charge every time any of the big-name actors is on screen, and it's sure not Christopher Coppola. Not that reining in the actors would have made this a great movie, mind you, because there's still the little issue of the script (which, we are forced to point out, was co-written by none other than Christopher Coppola.)

As a movie, Deadfall is a failure on every level, especially if you're gullible enough to believe the official Netflix description and expect to watch a "moody, labyrinthine film noir." But as a collection of vignettes containing big-name actors going completely apeshit, Deadfall delivers. As a parting gift, please enjoy one last glimpse of a completely unhinged Nicolas Cage: