Overview: A guy with a deep hatred for wearing shirts spends his whole life training to fight in an intergalactic competition called the Arena, permanently moves in under the floor of said Arena, then refuses to fight in the Arena when given the chance, but then he decides to fight anyway and becomes champion of the Universe.

The Case For: Some of the best fight scenes ever put to film, assuming you measure the worth of fight scenes by how close you come to collapsing a lung laughing at them.

The Case Against: Directed by our good buddy Peter Manoogian of Eliminators and Dungeonmaster fame, and even has that coveted Charles Band seal of approval/eternal shame. 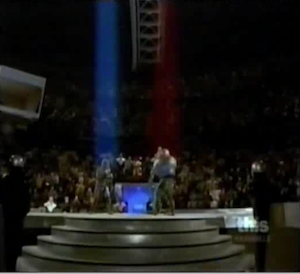 The Vein: Good evening ladies and gentlemen, and welcome once again to the eXtreme Sports Network's Wednesday night main event. We're your hosts Zane "What's Left of 'The Vein' " Zimmerman...

The Vein: ...And we're looking at a real pugilistic treat for the folks at home tonight!

Haymaker: That's right Zane, we're here to cover what truly promises to be a night to remember, at least in those brief lucid windows between concussions.

The Vein: There's about an eight-hour chunk of missing time before I got here, Hank, but with all the action we'll be seeing in the Arena I doubt I'll even miss it! So who're we looking at here, Haymaker?

Haymaker: Our headline fighter tonight is Steven "Steve" Armstrong, the only living fighter ever to be banned from ancient Earth broadcast American Gladiators for wearing a Battle Thong that was too skimpy. But since then he's really turned his career around, quickly becoming one of the galaxy's top fighters with less than six arms and only one head.

The Vein: I can't wait to see what he can do in the ring here at the Exxon-Nestle Transorbital Bloodsports Arena-Dome Synth Bar & Wholesome Family Grill, Hank.

Haymaker: Couldn't agree more Zane - it's great to be back here in scenic New Philadelphia, the city of begrudging inter-species tolerance. Tonight's bout might just be the most brutal and memorable sporting event around these parts since the Eagles took on the New-New England Patriots in the '99.9 playoffs.

The Vein: A sad day for Earth and indeed humankind, Hank, as both teams were devoured along with most of the Eastern seaboard by Zoxzxus, Eater of Worlds during the half-time show.

Haymaker: Speaking of devouring, tonight's broadcast is brought to you live by XZHINZON, SUPREME OVERLORD OF STEAKS - "Consume or Be Consumed!" at XZHINZON's! Now with six dimensions (in select locations)!

The Vein: Ah Ha Ha Ha. Deputy Sgt. Gravlax there with a mean Jawa-breaker, and over to club owner Giorgio "Gandalf" Gandalfini who's just putting the hurt on Sheriff Goatworship with a brutal Balrug-buster.

Haymaker: I've never seen such gratuitous brutality or terrible special effects in my life according to the latest version of my brain download, Zane. It's almost too much to watch.

The Vein: Hold that thought Hank, we're just getting word that the first fight is about to begin, let's throw it over to the Arena-cam!