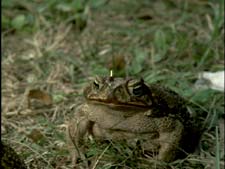 AAAAAAIIIIIIIIIEEEEE!Throughout all of the introductions and frog discussions, Karen keeps promising Smith a chance to shower and change into dry clothes. Being the gracious host, she then leads him around the house for ten minutes and never actually brings him to a shower. He does eventually get some dry clothes, though. Nonetheless, the family is happy to have him join them for lunch. Nothing like having a complete stranger who smells awful eat your food to make a family gathering complete! Jason tells - note how that's "tells" and not "asks" - Smith to take a look around the island and see if he thinks this frog issue is serious. I like the way that works. "My grandson wrecked your canoe and destroyed your camera and all of the carefully taken pictures you were planning to use to earn your rent, so you owe me a favor." Very smooth. Smith agrees, but before he heads out, he makes tries to call his editor, only the phone lines are mysteriously down.

On Smith's exploration around the island, he stumbles upon a whole slew of dead animals laying around. From frogs to snakes to giant centipedes to freaking falcons, it's like a freaking issue of Ranger Rick Goes to Hell. Soon, Smith discovers the cause of all of the corpses - Jason had sent a man out to spray pesticides all over the place. Smith finds the man face down in a bog, dead from a snake bite. The corpse has a snake around its neck, which technically counts as a shot with animal and human actors, but the corpse is a fake, and Smith never appears in the shot with the snake, so really it's just George McCowan trying to pull the wool over our eyes. The sheep that wool came from, however, will also never appear in a shot with a human. 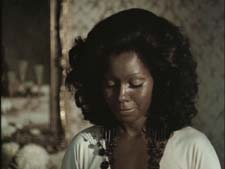 Back at the house, Bella shares some small talk with Maybelle. She admits that her real name is actually Maybelle, too! What a coincidence! Although the script never actually says so, it's clearly trying to indicate the black characters allying together against the rich honkies. The family is supposed to be nasty to Bella, like in the next scene, when the family is gathered around bitching about the frogs and waiting for Smith to return. There are several lines in the script where a white character says something to her that was clearly meant to be sarcastic or derogatory, but the actor delivers it sincerely, so all the malice is lost, then Bella reacts as if she was just offended. There's an entire subplot there that is just lost to crappy acting. Oh well. It's not like one more subplot was going to save this movie. It's fucking about frogs.

Smith returns and tries the phone again, but it's still down. He tells Jason in private about the death of the sprayer dude. They are distracted suddenly by a bullfrog that keeps jumping into the glass door. Smith and Jason are sort of disturbed by this, as it's unusual behavior for bullfrogs, but let me tell you, from the audience's point of view, there is nothing funnier than a frog with its face pressed up against the glass. I'm sorry, for a frog to be even the least bit frightening, it would actually have to carry hepatitis. Heartbroken over the tragic loss of the sprayer, Jason decides its time for dinner. The entire family stops short in the doorway, though, when they see a snake hanging from the chandelier. Actually, the snake is shown in the scene between Bella and Maybelle, but they never notice it. The second a white person walks into the room, though, they all notice it without even having to say anything. Jason shoots it down with a pistol. Despite it being a fairly small snake shot at relatively close range, it doesn't cause as much of a mess as one might think. That is to say, there is no mess whatsoever. The snake doesn't even have a bullet hole in it. For all intents and purposes, Jason doesn't even hit it. It's just so surprised by the loud noise that it dies of shock. Charles removes the snake, and the family sits down to dinner at their spotless table. Delightful.

Later that night, Jenny complains to Clint in their bedroom that she's sick of babysitting. I'm not sure exactly what else she expected going on vacation with two children would be, but I chalk it up to her being a gold-digging bitch. Clint shuts her up by telling her they just have to play their cards right and they'll get a massive inheritance when Jason dies. It's nice to know their relationship with Jason is built on familial love. Meanwhile, Karen joins Smith outside as he enjoys his nightly sitting-while-looking-rugged time. She engages him in casual conversation, also known as hitting on him so hard, he probably feels like he's getting beaten up. She doesn't exactly ask for sex, but she does seem to make it quite clear that should he decide to offer her a bit of sex, she would not be disinclined to accept. 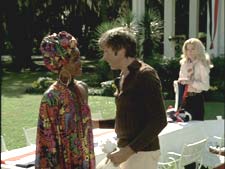 The next morning, Karen tells Smith that she thought about coming by his room during the night for a helping of sex, but she didn't want to wake anyone else with the creaking floorboards (or bedsprings! Ba-zing!). The rest of the family gets ready for the Fourth of July celebration, which is also a celebration of four birthdays within the family. Of course, the only one that matters is Jason's. In fact, no one even acknowledges any of the other people who are celebrating birthdays as well. Come to think of it, most of them actually get sent to their deaths during the celebration. Ooh, but I've said too much. Since it's nine in the morning, Clint is already hammered. He smacks Michael with a pillow a few times until Michael throws a hissy fit and storms off. That's the annual Independence Day tradition of Grown Men Having a Pillow Fight Until One of Them Turns Out to Be a Sissy. It has its roots in colonial times. Clint then decides it would be a good idea to blatantly hit on Bella in front of his wife. However, Bella, who is dressed in her "I'm not a fucking slave, unlike the other rent-a-Negros in this movie" finest, is not having any of it. Smith heads off to have a look at the rest of the island, and Jason sends Michael off in a jeep to see if he can find a downed telephone wire or anything that could explain the still-absent telephone service. 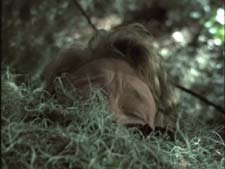 No one can escape the loose grassy shit of doom!

Michael drives for a few minutes, otherwise known as the Rich Boy's Full Day of Work, so he stops and decides to reward himself for his dutiful service by killing something. He pulls out his trusty rifle and takes a shot at a couple of birds flying overhead. If the video is any indication, he actually misses, but he goes tramping through the forest to find his kill anyway. As he's running, his rifle goes off for absolutely no reason and he shoots himself in the ankle. Naturally, this flesh wound paralyzes him instantly, and he is at the mercies of the woodland creatures. Unfortunately, this island in the middle of a lake somewhere in America is home not only to many species of frogs, toads, snakes, lizards, scorpions, crocodiles, and bird, but this particular stretch of forest is also the home to at least three distinct types of tarantulas. You know, just like in real life. The tarantulas don't actually attack Michael, though. Instead they sort of throw clumps of moss at him. I don't know what happens, exactly. The camera keeps cutting back and forth between Michael and one of several tarantulas, and every time it goes back to Michael, he's got more clumps of moss on him. Somehow this kills him. You know, just like in real life. Then entire sheets of webbing start draping over his moss-covered corpse. Now, I don't claim to be an arachnid expert, but if any tarantula actually made this much webbing this quickly, then a group of tarantulas this large could have a square mile of forest covered in web in half an hour. You know, just like in real life.