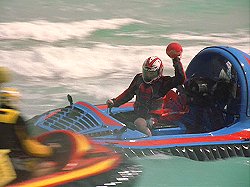 THIS IS HOW WE SETTLE SCORES IN THE F.L.After some more retarded subplot involving Alexa getting the Cuban busboy fired, Kaya decides to move in for the kill and sends Justin a text message telling him to meet who he thinks is Kelly at a fancy bar. I should probably reiterate that she and Kelly are supposed to be "best friends," but I guess what happens on spring break, stays in spring break, or something. Before Justin can show up, Kaya has her own song and dance routine establishing her as an actor-singer-dancer triple threat, if "threat" is taken literally, since she is by far the most horrible singer in a movie full of horrible singers. It's a good thing she's attractive, because her singing voice sounds like it was dubbed by an unsuspecting six year old boy lured into a recording studio with the promise of candy. When Justin shows up he apparently caught the tail end of Kaya's song because he immediately leaves after realizing Kelly isn't there, despite Kaya shamelessly pawing all over him in her best Paris Hilton impression. Meanwhile, Eddie the dork is sitting in his hotel room, feeling sad and lonely after several unsuccessful attempts to meet up with his cyber-girlfriend. There's a knock at the door and when he opens it, a large older man immediately hauls off and decks him in the face. "WORST. HOTEL. EVAR," Eddie screeches as he collapses to the ground.

The next day, Kelly and Alexa show up at another party that The Pennsylvania Posse is mysteriously throwing. Apparently their luggage was stolen after all because Kelly shows up in what appears to be a hula skirt made out of intact men's ties. Instead of talking to Justin, for some reason Kelly shoves him in a pool and does another long stupid song and dance number. Finally at the end, the cowboy Luke shows up out of nowhere and plants a long kiss on the struggling Kelly, who is shocked and dismayed. Justin, on the other hand, is outraged. "You have a boyfriend?!" he asks the protesting Kelly. Luke fights back: "why don't you back off, Sideshow Bob." Finally, someone with the courage to say what everyone was undoubtedly thinking. Before the two can come to blows Brandon intervenes and suggests a fair and equitable way to settle their differences: a HOVERCRAFT RACE. Scratch that, not even a hovercraft race, but some stupid ass game stolen from a MTV game show where the two contestants must throw bean bags into targets on each other's hovercrafts. For some reason Kelly insists to the cowboy Luke that he doesn't have to do this, and after the hovercrafts collide and Luke is hurt, Kelly is upset and rushes to his side. Wait, is she his boyfriend or isn't she? Why the hell is she ignoring Justin all of a sudden? Why am I still watching this movie?

Eventually things come to a head when Kaya once again plots to steal Justin away, despite Kelly apparently not even being interested in him anymore. However, I guess the tables are turned once Kelly happens to accidentally come upon the two of them right when Kaya moves in to plant one on Justin, and seeing her friend with a man, Kelly suddenly decides she wants him after all, then gets indignant and runs away crying. Justin then flees as well, and Kaya is left wondering what sort of crazy man would turn down a manipulative anorexic harpy. 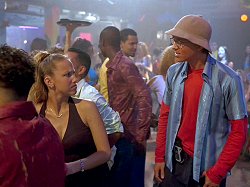 Excuse me, are you from the internet?Some more shit happens, including Eddie continuing to try and find his e-lover, which involves walking up to random girls in bars and asking, "EXCUSE ME, ARE YOU LIZZIE, FROM THE INTERNET?" At this point I became convinced that Eddie must have an account on the Something Awful Forums. Later, Kaya tells Kelly that the kiss she say was purely Justin's doing, and Kelly once again decides she hates Justin until she picks up Kaya's dropped phone and sees all the text messages that Justin thought he was sending to Kelly. As she reads through the messages like "GREAT 2 C U THE OTHER NIGHT" and "KLY, I MISS U," the music swells and suddenly she realizes the deception. Once again the dramatic high point of the movie comes when Kelly scrolls through messages on a cell phone. I knew this wasn't going to be Shakespeare, but I think this script was written by the after school writers' club at the Academy for the Profoundly Retarded. Kaya responds to being found out by crying like a baby and blubbering that it wasn't really her fault, once again just like Paris Hilton.

Now that Kelly knows the truth, she goes wandering around outside, until Justin manages to appear directly behind her, magically knowing that she's forgiven him for all his imaginary transgressions. "So now," he ponders, "in the entire universe, we're in the same exact place at the same exact time, feeling the same exact way about each other. How can you say it's not fate?" Apparently his philosophical studies were about as intense as his dramatic training. Then he starts howling in her face like a bushy haired gibbon, but soon some music comes in as well and it turns out to be another horrible ballad. Ironically, this ballad has nothing to do with their being in each other's arms, although this time they actually are pretending to embrace passionately, and as the song ends they purse their lips tightly and press them against each other with the sincere intensity of two boys in drama club who are forced to pretend to kiss for a school play. School plays generally have more plausible performances, however. There's a few more stupid songs before the movie drags to a predictable end.

I suppose I can't fault the producers of "American Idol" for wanting to make another quick buck off their inexplicably popular TV show. Nor can I really fault two okayish singers lucky enough to land a starring role in a movie out of the blue because they weren't as horrible as everyone else. Someone has to be responsible for this mess, though, and I guess the most obvious blame falls on the people who voted Justin and Kelly into their positions as the final two American Idols: namely, the American public. This is all your fault, jerks. You should be ashamed.