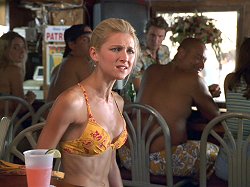 Kaya showing off her wide selection of ribs and abdominal muscles. Not shown: floating off into space.After milling around the beach for a while longer, the three guys head back to their hotel, where they're given the rules by a manager that looks exactly like Larry David. "Does this place have high speed internet access?" asks Eddie, and even Larry David recognizes he's a loser and glares at him. Meanwhile, the girls are standing around talking about cute boys, and Kelly mentions that one of the 27 men she grinded against during the recent song and dance number was pretty cute. Soon the two groups both head out to party, and at an outdoors club where a tap-dancer and a breakdancer are having some sort of cross-genre skills showdown, Justin and Kelly launch into another song as the two of them wander around the club of approximately forty people, futilely searching for the other and pining deep in their heart. Their tender words during the upbeat ballad describe how much they miss each other and how they were destined for each other, something obviously gleaned from their 17 seconds of dancing together where neither felt inclined to actually give or get any sort of contact information. The song ends and the two estranged lovebirds wander away forlornly.

About thirty seconds later, Justin expresses his longing by sitting at a bar and making girls flirt with him before he gives them a pass into one of his mysteriously awesome parties which he never seems to ever have to do any work for. Soon Kaya, the blonde girl who needs to get to work filling her bitch-o-meter, slides up and yanks all the armbands out of Justin's back pocket, then running away while waving them in the air and screaming that she just managed to steal all the entrance passes. Before Justin has time to react, every person in a thirty foot radius simultaneously dives on Kaya in an enormous mass of clean cut good looks. Suddenly the dam is broken and for some reason Justin is chased around by a crowd of girls desperate on getting a pass to his party, despite the fact that they were all obviously stolen. Justin frantically ducks inside a ladies' restroom, and to his surprise, Kelly is standing next to the toilet. "Come here often?" she says coolly. I am not sure why Kelly is so nonchalant about a man bursting into an occupied bathroom, unless they have communal toilets down in Texas. Justin introduces himself, as does Kelly: "my friends call me Kelly for short." Wait, short for what? Kellyana? Kelrond? Kellatio?

Before the two have much chance to talk, the mob starts pounding on the door, desperate for their free passes. Kelly decides to let Justin in on a little secret. "Every girls' bathroom has a secret exit," she says, pointing to the window. "Come on," replies Justin, "my hair won't even fit through there." His fear of defenestration is less than his fear of being torn apart by crazed drunken sorority girls, though, so he soon crawls out the window and lands in the mud. While he wallows in filth and attempts to shout pickup lines through the bathroom window, Kelly takes a paper towel and writes her number on it in lipstick. She appears at the window and tosses the wadded up paper towel out. "Call me," she says before disappearing, but she must be a stone cold bitch because she throws the paper towel right into the puddle, where the lipstick writing instantly vanishes and is lost forever. Instead of getting up and chasing her down, Justin decided to sit there and ponder the situation for a few minutes. Soon he runs into Kaya, who gives him her own cell phone number while claiming it's Kelly's, because any man one of her friends likes must be worth stealing, even if he looks like Sideshow Bob complete with oversized mouth. 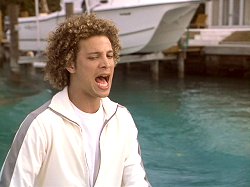 Justin is supposed to be romantically serenading Kelly at this moment. Maybe it's best she's turned away so she can't witness his demon yawn.After a boring subplot involving Alexa falling head over heels for a dirty Cuban busboy wearing a long flowing skirt, the movie cuts to the next day where the Pennsylvania Posse are holding a whipped cream bikini contest on the beach. The girls wander across it and Kaya, who worries that Kelly's tramp levels are dipping to a dangerous low, pulls her towards the stage, where she is magically mistaken for a contestant despite wearing several layers of clothing and is dragged towards the stage by two large black men who ignore her screaming and struggling. Once she's shoved on stage, she realizes that Justin is one of the leering perverts responsible for the spectacle, and her dreams of romance, built on 17 seconds of random dancing and a bizarre encounter in a ladies' restroom, comes crashing down. She takes a handful of whip cream and smears it in Justin's face, leaving in a huff. Justin attempts to salvage the moment by turning around and smearing some whipped cream on Brandon's hairless chest, but Brandon, whose eyes light up at the possibilities Justin's sudden behavior is suggesting, soon realizes that his heart isn't really in it.

Later Justin manages to catch up with Kelly at a burger joint and attempts to apologize by spilling hot sauce all over her. Unable to turn down such a smooth operator, Kelly gives in and agrees to go for a boat ride with him. They crawl into a motorboat and as they tool around the Florida waterways, Justin lays it all out. "Look, there's definitely something going on between us, you know what I mean?" Kelly, who is faced completely away from Justin, glances over her shoulder at him and then quickly looks away. This gives Justin the cue to launch into an absolutely awful ballad, which is quickly joined in by Kelly, who continues staring a full 180 degrees away from Justin as if her life depended on it.

There was a contest once to find the worst romance scene ever committed to writing. The winner ended up being a scene from some godawful novel where a man induces vomiting and quickly clamps his lips against his lover's, forcing the vomit down her throat and causing her to begin vomiting in return in a sort of back and forth puke battle before they finally collapse in a messy heap. It was lucky that the contest was confined to books because "The Boat Scene," as future scholars of "From Justin to Kelly" will call it, is possibly the most bizarre romantic moment ever captured on film. Kelly appears to be holding back tears; at the same time, Justin is leering at her out of the corner of his eye while belting lyrics out of his horselike maw, possibly thinking of throwing her overboard. During all of this, the two sing about being right there in each other's arms as if there is nothing strange about the whole proceeding. After their long love song, they depart the boat and Kelly says good night with a horribly awkward handshake. After this point, I guess Justin and Kelly are supposed to be some sort of couple, although about the only I can tell that they actually shared were mosquito bites.