Let's start with that last movie first, since that's the way Hot Boyz starts: with a loud, pointless car chase. We're not saying that there's no room for a good car chase to spice up a movie, but there's a reason that, say, the big climactic car chase in Blues Brothers was at the end of the movie, and not during the opening credits before we knew who the fuck anyone was or why they were chasing each other. Also, there's a certain ridiculous flavor to a Speakman movie car chase that just sucks all the fun out of it. Maybe it's the fact that all of the cars, vans, etc. are constantly flipping and twirling, as if it's in Jeffy's contract that the cars have to do at least as much martial arts as he does.

From there, we transition jarringly into what can be charitably described as a ghetto soap opera. A budding romance between aspiring rapper Kool and straight-A student LaShawna is tragically cut short when she decides to take the shortcut home through Crackhead Alley in the dead of night (but it shaves five minutes off her commute!), where she witnesses the grisly shiv murder[1] of an undercover cop. 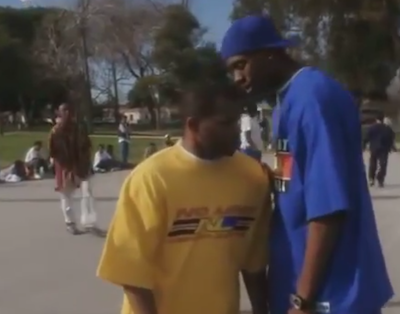 “You seem like a trustworthy fellow! Let me tell you about how I’m a snitch.”Because Hot Boyz is a thoughtful treatise on race relations and police accountability in the United States[2], the cops immediately pick her up and literally charge her with murder one before even starting the car. She didn't even touch the murder weapon or have any blood on her, plus she's probably the only person in a 10-block radius who's actually going to college, but nope, straight to supermax with no appeal. Or maybe this has nothing to do with racist police incompetence, and the local DA just really hates convictions and ran on a "catch and release" campaign platform.

All of that is relatively sensible compared to the next part, in which Kool is talked into infiltrating a local criminal gang by Det. Gary "Loud Cop" Busey, who seems to be genuinely helping Kool out but also wastes no time in planting some evidence to frame him for murder as a backup plan, so we're not really sure whose side he's supposed to be on. Kool is quickly taken on as an apprentice gangster by local underworld crime boss Saint, who teaches him the three golden rules of business:

2. Never not get paid

3. Always never not get paid (see how that double negative makes it back to being like the first one again? That's business, dawg.)

Then LaShawna reveals that she's pregnant, Saint escapes by rooftop zipline, and smash cut back to LaShawna in time for her to get beaten up in prison and have a badly telegraphed miscarriage. Wait, what was that second one?

Our favorite part of that scene might be the stirring "Mission: Impossible to Sue Us" theme instrumental track.

[1] Most people upgrade from the shiv after they get out of prison, but we guess that guy really found his craft and decided to become a Sharpened Toothbrush Grandmaster. We can't argue with his results.