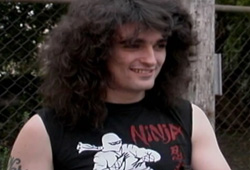 I want you to look at this douchebag and then tell me with a straight face this movie has one redeeming quality.So Harold goes on drawing his comics and communicating with his ugly ladyfriend by way of walkie-talkie. And here's where the movie's dialogue hits the other end of the shit spectrum. When the two speak over walkie-talkie the dialogue suddenly shifts from garbled, mumbled crap to ear-splitting, garbled crap. This is most likely because the sound isn't dubbed-over, so it actually comes from the walkies and that causes some sort of interference with the microphone.

Again, I have translated a few of the lines to give some of you masochists a feel for the movie:

After this emotional exchange the film show's us the movie's real hero: A fat, balding middle-aged guy wearing some knock-off Ray-Bans he bought at the flea market. The fat guy (John Mikl Thor), is apparently the one tie "Intercessor" has to the first movie, even though, from what I can gather, he doesn't even play the same role. In "Intercessor" he is the boy's comic vision come to life, even though there is absolutely zero explanation as to how or why this happened.

Thor walks into a seedy diner and orders a coffee. At some point I think he beats up a guy picking on the waitress, but I can't tell. This is because, much like being impossible to hear, much of "Intercessor" is also impossible to see.

Though my reviews may not back me up, I'm actually a pretty easy-going guy when it comes to movies. If it's entertaining enough, I'll like it. Maybe that's why "Intercessor" is so frustrating to me – maybe, just possibly, if they fixed up the 90% of the movie that was unwatchable and inaudible, it would have something going for it. But I doubt it.

The problem lies in the fact that there is either far too much artificial lighting or absolutely none. Watching "Intercessor" is much like staring at the sun for five minutes then staring in a dark closet for five, then repeating. In the "diner" scene, the actors look less like humans and more like amorphous, vaguely-animated ink blots, and there's something wrong with that.

This is all compounded by the fact that the filmmakers could not afford a tripod, and their cameraman was apparently afflicted by both Parkinson's Disease and a nasty meth habit. The camera shakes more than Michael J. Fox standing in a meat freezer.

But, again, it's not like the parts you can see are any better. Shortly after Thor leaves the diner of the damned we are introduced to the movie's myriad villans, also known as The League of Fat People in Wal-Mart Halloween Costumes.

I hate to keep up with this "break away to explain the action" shtick but something needs to be said about this. I realize most independent movie makers do not have the money to create big-budget special effects. That is where things like innovation and creativity come in. Lacking both of those, however, the makers of "Intercessor" decided to take a different route, namely one that led them to the department store, where they spent their allowance on costume blood and adult-sized nylon costumes.

For instance, here is a shot of one of the film's archvillains, a guy I have taken to calling "Gay Skeletor": 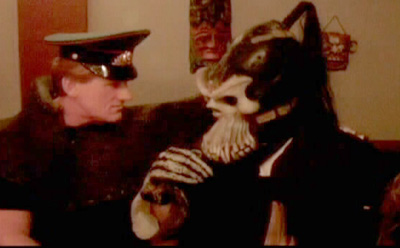 There are many more like this, however, the weak Canadian dollar can only buy so many Ghoulish Night Adult Skeleton costumes, so many of the villains just wear street clothes and maybe some extra makeup (if they're girls). 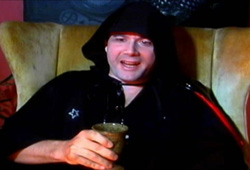 Lord of darkness or substitute gym teacher? You be the judge.

After our meeting with the LFPWMHC, for short, we see that Harold's neighborhood has been attacked by a group of zombies that spit chocolate syrup. They attack Harold's aunt and the ugly girl across the alley/yard, then come after him.

Harold, as I mentioned before, is crippled. As such, he does what any rational-minded, basement-dwelling cripple would do: He puts on a mishmash of hockey and football gear, then takes the two zombies on with his crutch.

Certain things take on symbolic meanings in Canada. For instance, to an American, a maple leaf is just a leaf that grows on a maple tree. To a Canadian, the leaf represents freedom. Freedom to eat maple syrup and make terrible movies. In that same vein, a crutch, to me, represents a tool a handicapped person uses to get around. In Canada, however, a crutch is a terrifying weapon of destructive power. Harold uses his crutch to fight off his zombified aunt and her undead cohort, then finds his girlfriend has been stolen by another group of zombies.

Here's where the movie takes a whole new turn. Maybe this is the "rock 'n' roll twist." I am not sure. What I do know is that you should not have part of your movie told in a series of still, pencil-on paper sketches, and make it an integral part of the plot.

Apparently the "Intercessor" crew did not get that memo (instead, they got the one from Satan that said "YES, BOYS, EVEN RETARDS CAN MAKE MOVIES IF THEY DON'T MIND SUCKING MY BIG RED COCK FOR ALL ETERNITY IN THE PITS OF HELL"). In an unanimated sequence that vaguely resembles the "Take On Me" video minus any kind of motion, we see a drawing of Thor speaking to a group of other, larger-breasted drawings, about how he has to save the world.

"You need the mask of power," they say. "I think I saw one out behind the dumpster at Costco. Oh, and you might need a magic wand, too."

So, back in the real world with no explanation, Thor hitches a ride with some douchebag in a beat-up convertible, trying to get to Harold in order to save his life. Apparently, his superpowers do not include "flying" or "catching a bus across town," but his plan works. Upon exiting the convertible, the douchebag hands him the magic wand and says "good luck."

Let me repeat that: Some random Canadian in a convertible, who says he is a "salesman" and is painted by the movie to be completely oblivious to Thor's plight, hands him a magic wand that looks mysteriously like a fleshlight. With no explanation. Then he drives off.

Meanwhile, Harold is having one hell of a time. His girlfriend is being eaten by a bunch of poorly-made-up zombies, and he's still crippled. He confronts them in a parking garage but they run off with the girl. He, too, is captured by two frat boys with a little costume blood smeared on them, and they take both him and his lady to some sort of zombie nightclub. The club is run by yet another fat guy, this one wearing a nylon red/black Dracula cape and a really, really ugly goatee. You know that big fat guy in every small town who listens to death metal and invariably gets arrested for trying to hide ecstasy pills in his kid sister's vagina? Imagine him in that getup and you'll see what I mean.

The zombie forces in the club are just too much for one cripple to handle, and Harold succumbs and is taken to hell with his girlfriend. He wakes up in a world full of scary Photoshop filters and more lens flare than any one human could bear. The fire, which was obviously just animated clip art the director slapped on the film after the fact, burns as Satan himself harasses Harold and his beauty queen.

But, wait! Here comes Thor! And he's angry (someone ate the Reuben he stashed in the break room fridge)! He tries to save Harold and the girl but they fall into a pit of clip art, so Harold performs his superhero-ly duties and steals a rubber mask from the clutches of Satan himself.