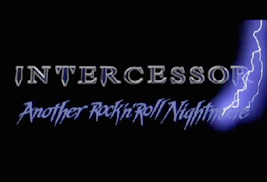 Overview: I'm not sure what's going on but I know it has to do with Canada. And horrible movies.

The Case For: There isn't one. No, seriously.

The Case Against: Everything from the opening credits to the ending ones. 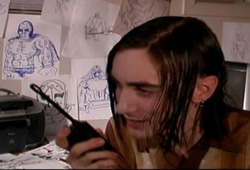 Back in 2000, Lowtax reviewed a little movie called "Rock N' Roll Nightmare." The movie was bad, but hey, it was from the eighties and he was nostalgia-stricken. He gave it a measly -39, but I can sympathize. By their very nature older horror movies should be given a little lenience, since they can become dated pretty quickly.

Now, over six years later, Lowtax has bestowed upon me the task of reviewing the sequel to "Rock N' Roll Nightmare," "Intercessor." And right now, before the real review begins, I will tell you readers I am giving it a -50. I have thought long and hard on the subject, and have boiled my reasoning down to two specific thoughts:

That's not me making one of my "cute" exaggerations. This is not me saying "oh, well, the lighting sucked and the plot wasn't that great, so I'm going to fluff things up a little bit." "Intercessor" is, without a doubt, the most foul thing Canada has ever excreted upon our glorious country, and after watching the movie, I'm starting to think nuclear war is the only valid recourse we, as a nation, can take.

But don't believe me! I'm just some angry guy who gets paid to watch terrible movies and make fun of them. Instead, let's look at the first line of the Netflix bio, which was printed on the DVD sleeve the movie came in:

A dark sorcerer and the lord of the undead unleash their nefarious forces on planet Earth in this campy horror tale with a rock 'n' roll twist.

First, there is no "twist" to this movie, let alone a "rock 'n' roll twist" (whatever the fuck that is). There isn't even any real rock and roll in it. Instead, the opening credits (which are filled with such exciting features as "smoke" and "blue lights") are backed up by some kind of bizarre, grotesque '70s throwback metal. That's not rock 'n' roll. That's the kind of music the guy with the van listens to. You know, the van that has a wizard battling a dragon airbrushed on the side.

Also, This movie is not "campy." The phrase "campy," when applied to a movie, denotes a sort of sensibility the film has. A knowledge that what is being watched is intentionally over-the-top or cheesy. Making a horrible movie and not recognizing it until you're done doesn't mean what you made is "campy." Calling "Intercessor" a campy movie is like calling Germany a great humanitarian nation because they apologized for Hitler years after the fact.

But that might not be the fault of the movie makers. As a rule, Netflix likes to cram every movie cliché they can onto every single one of their slipcovers. The average Netflix bio will generally read something like this:

A hero with a heart of gold and nothing to lose battles the darkest villans this side of the moon in this gritty romantic comedy with a horrific twist. Detective Roy Burkins may be a loose cannon and an edgy antihero, but he also has enough big guns to do his talking for him. Only his twin brother can save him from himself as he tears a path of vengeance across a desolate urban wasteland, where a person needs to keep his friends close and his enemies closer.

But, given all these things, you still may be wondering where the -50 comes in. "Pantsfish," you may be saying, "It may be bad, and it may be cheesy, but so far it doesn't seem that horrible. Are you sure you aren't just biased against Canadians?" 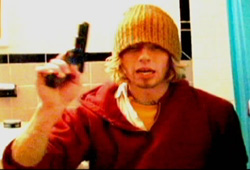 Don't worry, buddy. You're in a bad place right now and I understand your feelings. Just remember there are some razorblades in the bathroom if the gun jams.

Well, kind reader, yes, I am. But only because of this movie. Before I watched it, like many of you, I thought the nation of Canada was a kindly, gentle place, a country where people liked two things and two things only: Talking funny and smoking marijuana. But "Intercessor," for me, has cast the Canadian public in a different, far more sinister light.

Let's take, for example, the beginning. The film opens with three long-haired canucks drinking beer and throwing eggs at a house. Well, not really: In reality they are holding empty beer bottles to their mouths and gingerly chucking eggs so they don't hit whatever's behind the camera.

What is their intent? Why are they swilling Canadian beer and throwing Canadian eggs? Well, much like Mona Lisa's smile, it will remain a mystery for the rest of time. It is not because they don't talk: In fact, they talk plenty. It's just that you can't hear a goddamn word they say.

As with most movies, "Intercessor" tries to tell the bulk of its story through a little thing called dialogue. As one of the basic building blocks of film, dialogue lets the viewer know that things are, in fact, happening. The difference between other movies and "Intercessor," however, is that instead of "dialogue" the film's makers have decided to employ a tactic known as "Canadian retards kind of shuffling around and mumbling their lines."

In short: At least 90% of this movie is impossible to hear. This very well could be because the movie was filmed on a digital camcorder and the crew, in an order to cut costs, decided not to rent a boom mic, instead opting to use the camera's onboard sound capture.

Whatever the case, I know a lot of you like to rent these movies to see how bad they are for yourselves. As such, I've created a rough script of the movie's opening two minutes:

Not that it gets better once the action shifts away from the thugs. We are introduced to a young boy named Harold, who is crippled and forced to use an arm brace and crutch as a means to get around. He spends his days in his abusive Aunt's basement, drawing scenes from a comic he would like to produce. In short, he very closely resembles the type of person who would make a movie like "Intercessor."

He does have one joy in his life, though: A homely young girl who lives across the alley from him. At least I think it's an alley. At some points in the film she's living in a basement apartment across an alley, and at others she lives in a nice house across the yard. But what's continuity in the face of art?