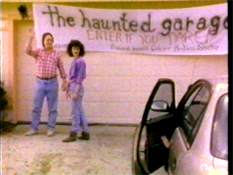 FEAR the HAUNTED GARAGE!!!Back to THE HAUNTED WOODS. Another character we've never met is arguing about cigarettes with another character we've never met [655 k]. It's all so terribly exciting and doesn't at all inspire you to take your own life. After that, the movie turns into about 40 minutes of people saying a couple lines, walking offscreen, moving objects, and muttering more lines of dialogue while walking offscreen again. I actually believe I blacked out around this point, but luckily the stench of cat urine brought me back to realm of consciousness... and pain.

Upon regaining use of my higher brain functions, I was overjoyed to watch - you guessed it - Shawn experience ANOTHER FLASHBACK! Hooray! Instead of seeing moderately frightening things like a barn or fence, Shawn witnesses an old guy in a bathrobe mumble some random lines [529 k] and trap his parents inside a bubble of crappy special effects. He also mentions that Shawn attracted his "special attention." If saying something like that won't get you locked up in a state prison for 20 years, I don't know what will.

Cut back to THE REALLY HAUNTED WOODS, which are being defaced by the three evil teenagers in plaid. They knock over a wooden cross... the SAME wooden cross that the guy in the 1800's built! Oh no! If I've ever learned one thing from renting crappy horror movies, it's this: never rent crappy horror movies. I also learned that knocking over crosses NEVER results in anything positive, but the first lesson I mentioned is much more practical. Almost immediately after desecrating the Wal Mart cross, Jacko arises from his grave and the cross spontaneously combusts in one of the worst pyrotechnics shows I have ever witnessed [677 k]. It's like somebody just tied a bunch of 4th of July sparklers to it and lit the thing, only less scarier. I wonder if the producers of "Jacko" sold the self-lighting crosses to the Klan after they were done filming the movie.

Anyway, Jacko springs to life and immediately knocks off the three teenage idiots by what I call "kind of scraping them" [864 k]. It's not really clear how such damage was inflicted to them, but the important point is that they die, and they die in a very bloody fashion. But enough of that pseudo-exciting crap, let's get back to boredom, movie!

"Jacko" whisks the viewing audience to another house we've never seen full of people we've never been introduced to. A man and his wife are watching an evil Rush Limbaugh-esque conservative talk show host, so we instantly know they're going to be slaughtered soon. Some kids approach their house to trick or treat, and the guy yells at them until they run away. However, the kids have a diabolical trick up their sleeve - they start tossing toilet paper all over the evil conservatives' house! Luckily for the evil conservatives the kids are absolutely atrocious at TPing houses [549 k]. That's what a liberal education will do to you. The Evil Male Conservative somehow hears the sound of toilet paper hitting the ground and goes outside to investigate, whereupon he is immediately murdered by Jacko [433 k], the Communist aggressor daemon. Miss Evil Conservative, who sees her husband's bloody corpse, decides to defeat Jacko by grabbing a butter knife, slipping, jamming it into the toaster, and electrocuting herself until she becomes a prop skeleton [1.4 megs]. A wry and clever attack indeed!

To continue the previously established "Trick or Treating" motif, the movie presents us with Shawn and his sister going to get candy from the fat guy's house (who we still don't know his name). The obese dynamo, who is dressed in a "Fat Ton of the Opera" outfit and mask, starts babbling about God knows what and laughing like an imbecile [948 k]. It was probably the most frightening part of the movie, except for the part where I realized I had spent $1.99 renting it.

There's a "downtime" of about 95 minutes of nothing at this point, where characters just say lines and walk around. Absolutely nothing of any importance happens, unless you consider finding new pimples around your groin area to be exciting. Jacko eventually gets around to killing some more unnamed teenagers [415 k] and a cable repairman who is wandering around the middle of the woods at midnight for some cryptic reason. The witch reveals to Shawn's family that Jacko is a daemon that wants to kill them all because their family was cursed. Yes, the reason Jacko has spent the entire movie killing everybody BUT Shawn's family is because their family is cursed. Perhaps it's one of those fancy "reverse curses" or something. I'd hate to think that Jacko was just dangerously incompetent or stupid. Or both.