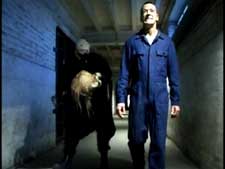 Robert and Junior off to the father-son picnic - OF DOOM!

When she comes to, Rebecca finds herself in some sort of dimly lit series of hallways and small, cell-like rooms. It's very atmospheric, if somewhat improbable for the basement of a gas station (hint, that's where she is). She stumbles around for a while until she finds the girl who had been in the SUV bound with her hands above her head and gagged, but seemingly unharmed. Rebecca tries untying her and undoing the knot in the gag, but fails miserably on both counts and just ends up getting knocked out again. She regains consciousness to find that she's been tied up, hug by her wrists from the ceiling, and that there is a bag over her head, which she is able to shake off.

The killer, whom I am going to call "Junior," since it's the name of the freaking movie and no one else bothers to do it - his father calls him "boy" and even the damn credits refer to him as "the creature" - hobbles in, sickle in hand. He is called off by his father, Robert the mechanic. Junior begins strangling the girl from the SUV, who is suspended nearby. Robert asks Rebecca if she wants Junior to stop. She answers simply in the affirmative, which is a pretty obvious blunder when the guy doing to strangling is also holding a huge fucking sickle. Surprise surprise, Junior takes the cue from Robert to cut the girl's head off. Way to go, Becky. Robert then begins to tell his story in typical prolonged bad-guy-wants-victim-to-feel-sympathy-for-him-monologue fashion. When Junior's mother was pregnant, she took some bad drugs that made her child deformed. Plus, he got the umbilical cord tied around his neck during birth and suffered massive brain damage. When he was fourteen, Junior killed some girl and got put in an asylum. Then his mother killed herself, as we saw in the movie's irritatingly slowpaced opening scene. So she didn't kill herself over the frumpiness of her wedding dress after all! Robert then sprung his son out of the asylum and has spent the last fourteen years providing him with women to kill for amusement. So the opening scene took place fourteen years ago? Man, Martha hasn't aged a day! 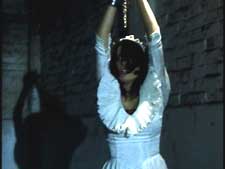 There's nothing worse than waking up to find your hands are tied, you're about to be killed, and worst of all, you've become frmpy.

Robert informs Rebecca that the next day is Junior's birthday, and she is to be his present. He leaves her to dwell on that. The next day, she wakes up to find herself dressed in - you guessed it - the frumpy wedding dress. The very frumpy wedding dress that Junior's mother killed herself in. I guess she used to wear it around the house all the time or something, because Robert expects Junior to perceive Rebecca as his mother on sight. This is asking a man who needs to be fed through a plastic funnel strapped to his face to recognize the woman he attacked the day before as his own mother because she's wearing a dress she wore before he was ever conceived. I would think there'd be more of a chance that Junior would think his father brought him someone to marry. Maybe in the Netherlands women wear their wedding dresses all the time after they get married. If so, if I marry a Dutch woman, she'd better damn well have a less frumpy wedding dress than that. Rebecca immediately seizes on the role she's being forced into and tries to sweet talk Junior into not killing her by pretending to be his mother. Thus begins a long, arduous scene which looks something like this:

1. Robert tells Junior to kill his mother.
2. Junior raises his sickle as if he's going to strike, then holds it there for an awkwardly long pause.
3. Rebecca tells Junior she's his mother and softly whimpers to him not to do it.
4. Repeat. 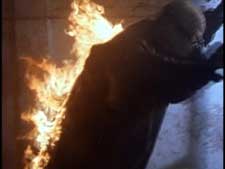 "Too late I learn to respect women!"

And on and on it goes. After a few agonizing minutes of this, Martha shows up to put a stop to Junior's murderous rampage once and for all. Unfortunately, before she can get off her high horse to use it as cover, Junior kills her. So we go back to step one. But this time, Rebecca doesn't plead for her life. As Junior swings his sickle, she manages to wrench free of the chains binding her wrists - that's right, she breaks out of chains - and the sickle cuts Robert across the side of the neck instead. Rebecca ditches the wedding dress (odd, considering its her leverage with Junior), and books it to the door to freedom, which is quite naturally locked. Not that it wouldn't be. I honestly don't know why this takes Rebecca by surprise. Checking to make sure Junior's not around, she goes back to find Robert slumped over dead. She searches his body and finds a key, which she promptly discards. She then finds another one and decides that's the one, based on a system of complete bullshit guesswork. She wisely puts the wedding dress back on and returns to the door, but Junior is waiting. Rebecca is able to convince Junior to drop the sickle and come give his "mother" a hug. Yes, another savage beast taught compassion by the incredible power of a mother's love and a soothing hug. Then she punches him in the face, squirts him with lighter fluid (which she happens to have on her still) and lights him on fire. Damn. It's a good thing that when Junior dragged her all the way back to the gas station from that random field, he also took her purse. Finally safe, Rebecca puts the key in the lock, only to find out that - oops! - it's the wrong key! Gee, maybe you shouldn't have thrown that other one away, hmm? Then she gets an unpleasant surprise: Robert's not quite dead, and he's got the sickle. Maestro, fade to black, if you please.

We come up on a nice sunny day. Robert is filling the gas tank of a car belonging to another two young women. He slips something into their tank when they're not looking, then sends them off on their way. Remarkably, they pull off into the same grassy alleyway that Rebecca and Sandra did earlier to check their directions. And would you believe it, their car won't start up again either. Back at the gas station, Robert pets Junior's old sickle lovingly. Bum bum bum!

Having the villain win out in the end is a decent twist and all, but I can think of a few other twists that "Junior" could have benefited from. For instance, having Rebecca keep calling Sandra's cell phone instead of calling once and then going to look for her in some field somewhere. Or maybe if Rebecca's dialogue in the second half of the movie was audible. Or how about not having an eleven minute scene where nothing happens? Those are all some crazy twists that Marc Ickx might have thought about incorporating into his masterpiece. The biggest problem this movie has is that it is flat out boring. The scenes are padded out with unnecessary dialogue, painfully slow delivery, and awkward pauses. I didn't even have the heart to cover all of the scenes in which the cast and crew of this movie deliberately waste our time. Believe me, there are plenty. In the end, "Junior" tried to create a villain team with the conflicted parent-child relationships that made classic baddies like Jason/Mrs. Voorhees and Norman/Mrs. Bates so great. Unfortunately, they ended up with a movie more along the crap/godawful line. Ah well. Thanks anyway, Holland.