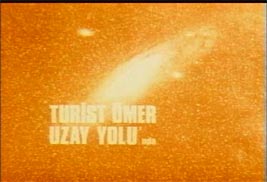 Overview: This Turkish version of Star Trek is a complete rip off of the original Star Trek series, only the main character in this is a lecherous drunk accompanied by an entire soundboard of wacky effects. Everything about this film is below Z-grade.

The Case For: You thought the special effects for the original Star Trek series were far too realistic to be enjoyable and you wanted to watch a bizarre simulacrum of it in a language you don't understand.

The Case Against: This entire film is one continuous case against. If "Turist Omer in Star Trek" were a lawyer defending itself in court it would be disbarred for incompetence. 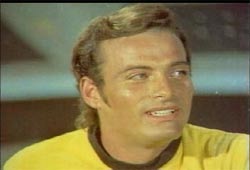 Kirk appears to have a tropical fever.

Turkey is one of several countries including Mexico and, to a lesser extent, India that has a great love for American cinema but lacks the funding for their movies to compete in terms of quality. I have heard of Turkish versions of Spider Man and Super Man, but this film is a uniquely Turkish version of the original "Star Trek". What makes it especially bizarre is that this movie is one installment of a series of movies that have nothing to do with Star Trek. They are about a filthy doofus in a smashed hat named "Turist Omer" who ends up in wacky situations. In the case of this film he ends up in a really bad version of Star Trek where Captain Kirk looks like he's made out of candle wax and Leonard Nimoy's character has become "Mister Spak". Just by virtue of the fact that it's Turkish you can expect abysmally bad special effects and cinematography as well as a nigh-incoherent plot.

The opening sequence is virtually identical to the credits sequence that opens an episode of Star Trek. I knew going in that the Turks had stolen every single idea for the movie from Star Trek, but during the opening credits they actually use the theme music and credits footage from the TV series. The difference here is that in the Turkish version they have put an orange filter over everything and washed out all of the color so that the Enterprise looks more like a glowing Frisbee than a spaceship. The Star Trek theme music also cuts out abruptly and is replaced by some really groovy beach music.

With the credit sequence completed we are given our first look at the inside of the Turkish Enterprise, which slightly resembles the US version, with much worse lighting and a lot more randomly placed cardboard consoles. The floor also has a lovely checker design. The uniforms look pretty much the same as they do on the TV show, although there is little rhyme or reason to who is wearing what uniform. For example both Mister Spak and Kirk are wearing bright yellow uniforms; apparently some nebulous distinction such as forehead size or ear shape denotes their respective ranks of Mister and Kaptan. Meanwhile, the bridge of the ship is positively crowded, with seven or eight random crewmembers wandering around or spinning Centipede balls on cardboard control panels.

After treating us to more than a minute of crewmembers wandering aimlessly around the bridge or intently pushing gigantic buttons Kaptan Kirk enters and strides over to his chair, which seems to be stuck off to the side. Nice and out of the way of all the foot traffic. Kaptan Kirk looks like he has been shaped from rancid yogurt, and his lips and constant face-sheen are disturbing enough that I would not recommend small children or pets viewing this movie. He blabbers for a while mentioning names and we are soon introduced to Mister Spak. The actor portraying the Turkish knockoff of Spock emulates the Star Trek character by looking directly into the camera and raising his eyebrow dramatically during every close-up. To be fair, this is a pretty accurate portrayal of the original. 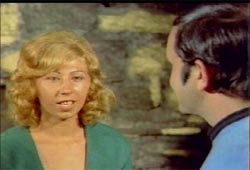 Oh Turkish Star Trek, where do you find such gorgeous women?

Doctor McCoy is the last major character to join the bridge crew. He has the same face-sheen as Kirk, along with a haircut that is impossibly symmetrical. He also vaguely resembles an older and doughier Billy Corgan who fell face first into a vat of pancake makeup. Whatever they discuss it involves sending an away team somewhere that consists of Doctor McCoy and Mister Spak as well as two randomly uniformed assistants. When the foursome arrives in the transporter room they stand against a wall so bare that it resembles a firing squad execution chamber. The special effects for the transporter are only slightly worse than the original series and involve the camera going out of focus and a bunch of white dots being drawn onto the film stock. The best part is that the white dots jump around for a few seconds and then disappear and then the crew is still where they were when they started. Then the camera keeps going more and more out of focus, then the white dots reappear, then the scene cuts to the planet and everybody appears there.

The away team lands on a planet that may or may not be earth (it gets confusing in a little bit, you'll see why) and begins searching for someone amid what appear to be Greek ruins. Spak and McCoy are in a lab that's in a cave when they are approached by a sort of scary looking woman with a serious case of Chicklet-teeth. McCoy seems to recognize her, Spak just raises his eyebrow suspiciously. When one of the other team members walks in he sees a completely different and much less scary looking woman. The guy goes back outside and is joined by the woman. At this point I realized that he was going to die and she was going to suck his salt out, that's because this is directly based on one of the better known episodes of Star Trek.

Meanwhile, back in the cave, Spak and McCoy are joined by some sort of professor who is being followed around by the worst robot I've ever seen in a movie. It's an oily and muscular young man, wearing some sort of sassy loincloth, who appears to have the insides of a radio glued to his naked back. What makes this robot especially ridiculous is that he stands with his arms held out from his sides and walks like he has no articulation in his legs. Like a penguin, waddling from side to side. The powwow with the professor and his greasy manbot is interrupted by a really hideous scream from outside. The illusory salt-sucking woman has sucked the salt from the crew member, leaving him dead and covered in large red circles.