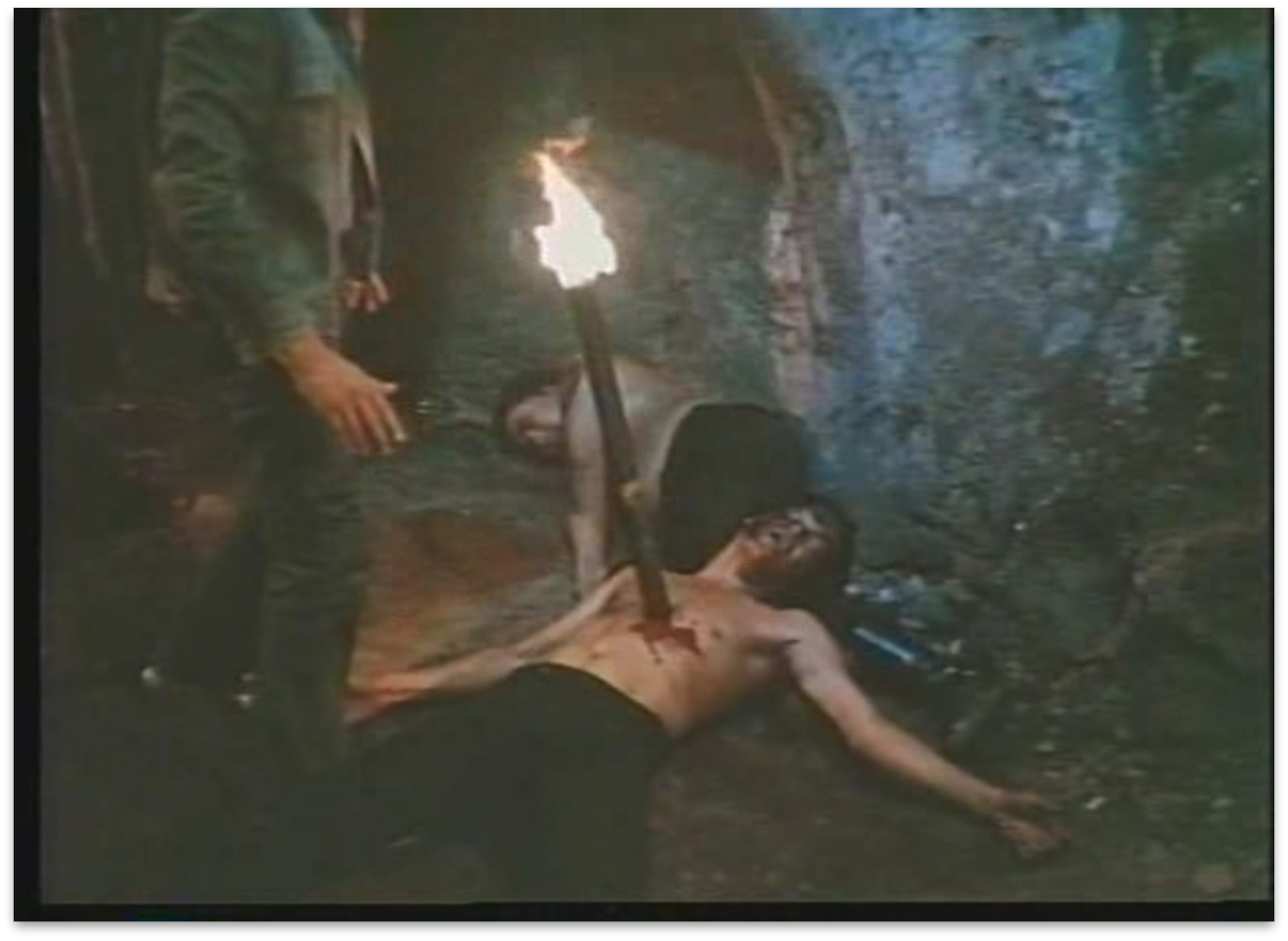 Heartburn can feel like being impaled through your sternum with a six-foot-long Tiki torch.

Lando eventually tracks his daughter down to a big cage full of naked extras, whose acting ability is limited to expressing a combination of embarrassment and boredom that we like to call "tedioushame." Lando's attempt to bust his daughter out fails, because magic, so he runs off to find the Prince of Magic for the first in a series of increasingly stupid and/or climactic battles. In their first showdown Lando is a little slow on the magical draw, so he gets spun around like a top, before being given a lesson in cliff-diving for dummies (as in, they threw a dummy off a cliff and filmed it:)

Lando (the real one, not the dummy) gets fished out of the river by an old guy, who turns out to be God. Are we allowed to complain about "deus ex machina" when God is actually one of the characters in the film? We're not sure. Either way, God offers some helpful words of advice to Lando, along with a blessed stick that shoots green bolts of Holy Power. (Pretty sure you normally have to be at least a bishop before you get one of those, so Lando should feel pretty honored.) Then, because he's omniscient and also loves ruining surprises, God finally puts a stop to all this "mysterious Dark Master" stuff and tells Lando that the guy he's looking for is none other than Satan himself. What a shocking twist!

Rejuvenated by his pep talk with the Almighty, Lando heads back for sweet revenge on the Prince of Magic. They find each other in a forest, and proceed to have a dramatic laser-off that makes the staring contest from earlier seem exciting:

Lando is walking through the forest and - wait, what the fuck? What happened to the previous scene? The hero barely starts winning the climactic battle with the guy who kidnapped his daughter, and the scene just goddamn ends? Was there footage for the end of that fight that just wasn't good enough to make the final cut? Well, maybe the next scene was just too good to put off. Lando wanders into a big game hunters' lodge, and has to fight for his life against a woman who turns into a dog. She pins him to the ground, and then - 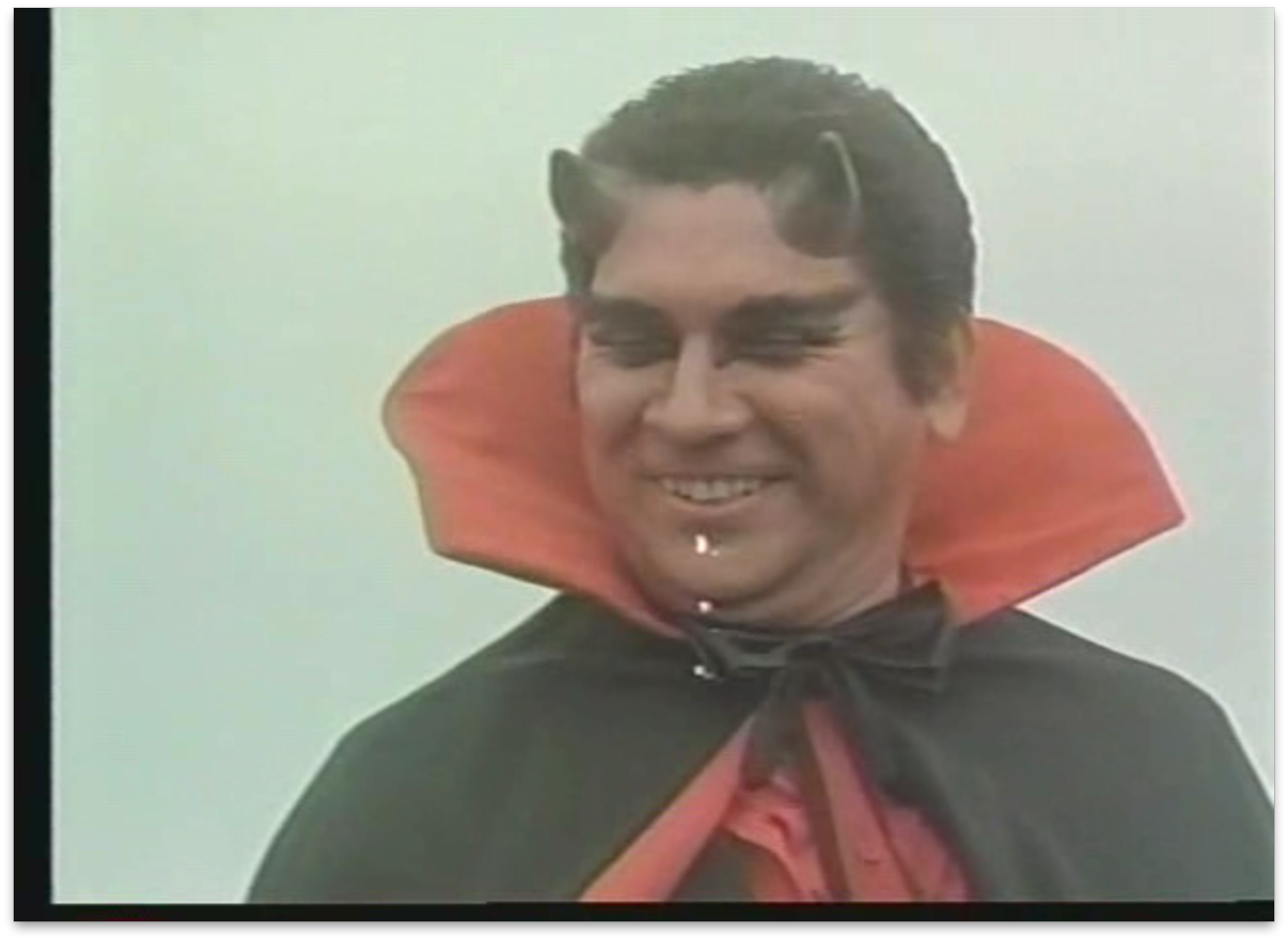 Man, Satan needs a new tailor. We've had haircuts with more expensive capes than that on.

Satan is sitting on his throne, overseeing - are you kidding? Another scene where Lando is fighting for his life just ends with no conclusion. Fan-fucking-tastic.

Anyway, Satan is getting ready for his wedding day, which he does by changing from a crappy devil costume into his finest 99-cent-store Dracula costume. His servants start preparing the bride-to-be with an unholy ceremony that mostly seems to involve pouring a mixture of maple syrup and red food coloring on and around her. How diabolical!

Back to Lando, who is still stumbling randomly around the countryside. Eventually, he comes across an instantly recognizable symbol of the damned - a red rock with a tree growing out of it. It must be Satan's...mailbox? Satan's Zen garden? Your guess is as good as mine, but whatever the hell it is, Lando takes it as a cue to start yelling at Satan to "belize my dotterl," or possibly "release my daughter." Apparently the red rock is actually Satan's doorbell, because the big man downstairs immediately appears to see what all of the ruckus is about.

And so at long last, 80 minutes into the movie, it's finally time for the showdown with Satan. The big dance with the Devil. The merciless melee with Mephistopheles. The...fuck, we've gotten so used to the movie putting this fight off that now we're doing it. We've become everything we ever hated.