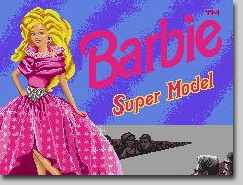 At a Glance: It seems the hard working folks at Mattel weren't making enough money from their staple "Barbie" doll line of products and felt the franchise needed to expand in order to survive. So in order to bolster falling profit margins and keep those "bloodsucking" stock holders off their backs, they ventured into the dizzying world of bright lights and seduction that is console video gaming. At least that's what I'm assuming because there sure isn't any other reason why this title was released. If people want an answer to why gaming is traditionally more popular among males than females, this is surely it. Mattel are more guilty of trying to sell a low quality product based on mere name recognition than Aphex Twin or John Romero. That's ALOT of guilt. 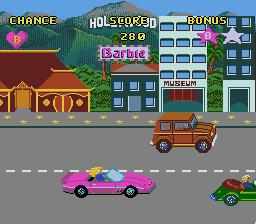 Its a sunny day in junkietown and Barbie enjoys a cool breeze in her convertible!Game Plot: The plot behind this games seems to revolve around a script Mattel commissioned David Lynch to write. It involves Barbie seeing "future echoes" of herself and then engaging in fulfilling them. Then, for some reason, she models clothing or something. I'm not sure but I think there's something to do with a burning log cabin as well.

The main goal is to make your way to one end of the screen, practice your complex modeling routine, and then scurry back to your point of origin where you must perform your practiced routine FOR REAL! The tension! The drama! I'm sure you can smell the excitement!

Once that is completed you have to leave to a new exotic location, I think mainly because Barbie is trying to escape loan sharks. Once you've pissed off the local organized crime boss, the terrible cycle of vengeance begins anew and you find yourself fleeing from one side of the screen to the other again, pimping your good looks for a brand new plane ticket to freedom!

On your journeys from one side of the screen to the other you may encounter bags or cameras which force you to test your memory skills and recreate the latest Barbie magazine cover by either painting up Barbie's face to look like a reject from the Degrassi Junior High series or choosing the outfit which makes Barbie look less like a desperate crackwhore down to her last rock.

Weapons: Barbie has three secret weapons at her disposal: her ability to travel at either extremely slow, slow, or slightly less slow speeds. Not quite as handy as say, "Laser eye beams" but just as unexpected and truly a formidable combatant. Aside from that, her good looks are her only other weapon. So yeah, good luck getting your own back against Vinnie "the hand" Stompinato. 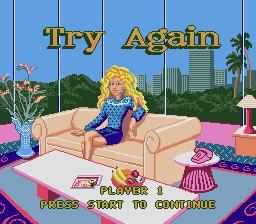 Fire walk with me!Enemies: Apparently Barbie owed alot of money around town as it seems that everyone wants a piece of her. Enemies range from disgruntled walkers to disgruntled beachballs (not to mention those disgruntled seagulls).

Number of Levels: I managed to survive three separate levels before blacking out. The first level is a Carmageddon-esque drag race down some Hollywood street. Either that or it was some vomit soaked street in Junkietown, I couldn't tell if the yellow splotches on the sidewalk were in fact stars or junkie vomit. In this level you must joyride in a hot pink convertible all the way to the end of a quarter mile while avoiding fellow drivers and breaking as many different road rules as possible. Apparently Barbie has hit rock bottom and cannot afford brake pads but figures that's okay because the car is only capable of attaining a galloping six miles an hour. The beach is the next stop for our mobster snitch (OK so maybe she owed money AND ratted out the Mafia, who can really say?) and it's a fight for survival against Frisbees, beachballs and, as previously mentioned, disgruntled seagulls. The snowfield level was the last thing I remember. Apparently Vinnie finally got some pros in on the job to rub Barbie out, as the snowballs hurled in this level are almost totally unavoidable. Other highlights include perilous puddles and kids with magic sleds that don't require the conventional "incline + gravity" combination that makes travel by such means possible.

Number of Bosses: Aside from the mythical mobsters, there are no such bosses to speak of.

Defining Moment: This moment came during the game over or "try again" screen which no doubt comes straight from the pen of Mr. David "Twin Peaks" Lynch. After being knocked down by a snowball, Barbie was transported to some high-rise apartment and smiles unerringly at the camera, despite the fact that we, as the audience, must assume that failing to complete this game is not in fact the goal.

Then again, perhaps not.