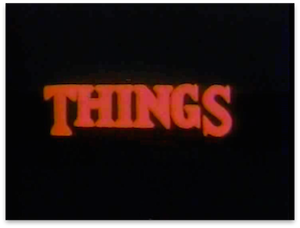 Overview: Nope, you have zero chance of finding a synopsis of this movie, here or anywhere else. We'll just quietly point out that one of the plot keywords on IMDB is "plot hole" and leave it at that.

The Case For: Unlike the infamous Troll 2, which contains no trolls, this movie certainly contains several objects which could be described as "things", so you'll get your money's worth on that front.

The Case Against: This might actually, legitimately be the worst movie ever made. And we don't say that lightly.

We're not going to pull any punches: Things is quite possibly the worst movie ever made. This is probably the 1 millionth wacky comedy movie review to start with some variant of that line, but we're not going for zany exaggeration. Before you start writing that angry e-mail about how wrong we are because we haven't seen Naked Grandma Chainsaw Rodeo 7, have a taste of the utter madness that is Things:

Watching Things made us long for the simple comfort of Dan Haggerty's imploding CGI face, the autistic folding chair symphonies of ROTOR, the colorful and nuanced antics of Recon Squad, or even the tense, heart-pounding inaction (inblacktion?) of Blackenstein. Whatever the hell it is that director Andrew Jordan et al have accomplished here, it makes the Polonia brothers look like the Coen brothers by comparison. Things is fucking bad. Even by our standards.

In fact, we can objectively prove to you that Things is the worst movie we've ever seen, because out of all the "worst movie ever" candidates we can think of, Things is worse than every single one in some substantial way. Zombie '90: Extreme Pestilence? Sure, there's plenty of retarded "comedic" gibbering dubbed over parts of Things, but they didn't commit to dubbing over the entire movie with fart sounds and terrible ad-libbed poop jokes like Zombie '90, and what's leftover here is ultimately much worse[1]. Feeders? At least the papier-mache monsters in that clearly took about 5 minutes to throw together. The resident Things...things...obviously took a lot of painstaking effort to make and probably move around, and they're still about as scary as a tennis ball stuffed into a tube sock.

Canadian mosh pit: you just kind of bump into the trees."But what about Nukie, or Hellgate, or Troll 2?!", you ask? Nukie looks like a fucking special effects bazaar in the middle of an acting convention compared to Things, and we'd gladly watch all of Hellgate's Mr. Happy Bats and expanding laser turtles and self-mutilating British ghost magicians on infinite loop for the rest of eternity vs. another minute of Things, for starters. And have you ever seen Troll 2 in trailer form? Even the ones made by idiots make it look amazing. We defy anyone to make a trailer for Things that would make even the stupidest and most self-destructive of people actually want to watch it[2]. Also, the child star of Troll 2 successfully filmed a documentary about the cult following of the movie, whereas according to an anonymous IMDB tipoff, the stars of Things tried to rip that model off but failed because they didn't even have a working camera, and that should pretty much say it all right there.

We can even draw the inevitable Manos comparison in that the opening credits involve a really pointless roadtrip around the countryside, except this one's visually even less appealing because everything is painfully blue and shaky and they literally manage to point the camera directly into the sun at one point[3]. Sure, the driving sequence might be mercifully short compared to Manos, but even if you look up the most bootlegged uber-kvlt underground black metal purist videos with the guys in witch capes trying as hard as possible to make it look like they're filming deep inside of Satan's asshole, Things looks way, way worse.

Don't worry though - as certified masochist bad movie sherpas, we're experts in all the advanced techniques that you'll need to survive an encounter with Things. Insider tip: if you put on Pink Floyd's Dark Side of the Moon and Things at exactly the same time, they don't sync up at all, but it's still really great because it drowns out all the sound from the movie. If you don't have Dark Side of the Moon handy, the actual Things soundtrack does a pretty good job not syncing up to itself:

Sound effects, with an emphasis on "F".

Our favorite part of the soundtrack (if you made us choose) would have to be either the uncredited appearance by punk-rock legends the Never Had Sex Pistols, or possibly the classic "Variations on James Bond Theme, for Atari and Detuned Whale Penis" by resident minstrels Stryk-9, who probably should have given their demo tape to a record company instead of letting Andrew Jordan leave it on his dashboard in the hot sun for a few weeks and then put it in his shitty movie. The music in the movie is actually done by somebody called "Stryk-9", by the way, we didn't just make that up to be dicks.

[1] Also, the idiots who made the movie are doing the dubbing, instead of some random guy doing it to make fun of German people because he's really high and doesn't know what the fuck they're saying.

[2] Seriously, do it. We'd be really impressed and feature it and possibly even give you all of our money we don't have.

[3] Remember, kids, don't stare directly into the sun, or you'll turn out like film star Barry J. Gillis. Also, we'd make fun of the camera operator for this but according to the credits his name is "Tommothy", which is the best and most Canadian name we've ever heard, so we'll let it slide.