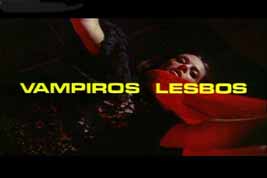 Overview: A woman falls under the somewhat seductive spell of a countess/performance artist/quasi-vampire. In order to save her from the curse of the undead fiend, the supporting characters don't really do anything.

The Case For: Fans of high speed zooms will enjoy the film's camerawork.

The Case Against: Fans of any other sort of camera movement will be sorely disappointed. I watched the movie with subtitles, but I could still tell that the actors were doing a terrible job.

There's been a lot of talk lately about this Spanish/German/Turkish movie. While it failed to make waves when it was released in 1970, "Vampyros Lesbos" was rediscovered in the Nineties and has since been enjoying underground success around the world. It ends here. I have the rare opportunity to make a difference with one of my reviews, and I have to take it before anyone else refers to this piece of trash as a cult classic. Yes, cult classics can be campy and low-budget, but they also have to be entertaining. The most entertaining parts of "Vampyros Lesbos" are the totally pointless shots of a kite flying, and in a movie with two relatively attractive women making out with one another, that's saying something. Specifically it's saying that this movie bites. 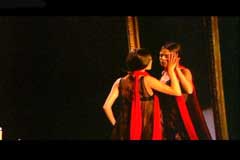 Here we see a carefully arranged shot of the mirror reflecting the the crap out of the vampire.

The movie begins by exercising one of its most frequently employed techniques - the "random image that has no bearing on the plot and can only conceivably exist to waste film" shot. In this instance, the shot is of a ship in the distance, and it holds for the entire duration of the opening credits. Meanwhile, loud, distorted, electronic voices shout over a radio in German - possibly about lesbian vampires, possibly not. There are no subtitles, so I can't be certain. After the credits list everyone who so much as saw the film, we cut to a dark-haired woman reaching out toward the camera while the wind blows her scarf back in a vampirey manner. Despite the vampirish angle of the shot and the vampire-esque fashion in which the woman reaches out, the mystery of the vampire's identity (it's the woman) is carefully safeguarded for a significant portion of the film. And by "a significant portion" I mean "pretty much until the next scene."

We cut to a dark stage, empty aside from a full-length mirror, and a candelabra and a nude woman standing perfectly still, like a mannequin. The vampire, I mean, dark-haired woman runs onto the stage in little more than her underwear. She the proceeds to give a show consisting of writhing around in front of the mirror, putting her underwear on the other woman, then taking her underwear back. As a finale, she lays the mannequin down and bites her throat. But she's not a vampire! In the theatrical preview, they used an actual mannequin for this scene, but apparently having the vampire put her underwear on an inanimate object and start making out with it wasn't quite lesbian enough. The performance gets massive applause from the audience of Ugly As Sin Anonymous members, especially Linda and Omar. Jesus Franco lets us know that Linda and Omar enjoyed the show more than anyone else by zooming in on their faces repeatedly. Thanks, Jesus Franco. 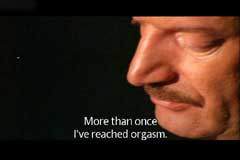 Linda and Omar are fast asleep in bed, but Linda is thrashing around like an epileptic on caffeine pills, which means she must be having a bad dream. Her dream basically consists of the vampire calling out to her, some easy funk, and a bunch of utterly pointless shots of a kite, a moth, and a scorpion. The kite, moth, and scorpion motifs reappear constantly throughout the course of the film. They sort of signify the presence of the vampire, but more importantly they signify that the vampire enjoys flying kites and watching nature documentaries about moths and scorpions. And who doesn't? We transition from the dream itself into a psychiatrist's office, where Linda is describing the dream. She mentions that it arouses her and has brought her to orgasm on several occasions. Personally, I'm a little weirded out by someone who expressed her arousal by violently flailing and who can be brought to orgasm by a kite, a moth, and a scorpion. The psychiatrist isn't even paying attention, as evidenced by the super-zoom on his notepad full of doodles. He advises her to go get another lover, securing himself the title of worst German-speaking psychiatrist since Freud. 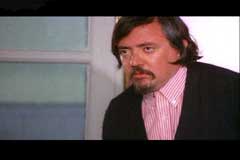 Ignoring her psychiatrist's advice entirely, Linda returns to Omar and makes plans to spend a few days with him, just the two of them. She then promptly leaves for an island off the coast of Turkey. She misses her boat and is forced to stay at an extravagant hotel where she is the only tenant. Memmet, the hotel's resident bellhop/murderous psychopath with serious hygiene issues warns Linda that "madness and death rule the island," and then invites her to find him later in in the wine cellar. Yeah, leggy blondes can never resist invitations to meet misshapen lumps of flesh in dark basements. Keep dreaming, lumpy.

Linda goes to sleep in her room, but she is jolted awake, probably by another kite dream. She hesitantly sneaks out of her room (this is one of those hotels that doesn't let their guests out) and actually decides to go down to the wine cellar. Why she'd ever go down there, I'll never know. Possibly it was to yell at Memmet for having the gall to get his ugly stink all over her bags, but that's just speculation. In any event, she finds Memmet standing over the body of a girl covered in crappy latex paint... uh... blood, with a hacksaw in his hands. You'd think that he'd at least clean up his dead girls if he was expecting company, but Memmet is totally taken by surprise. I'm always a little shocked when people show up at my place after I invite them, too. Having stumbled upon Memmet's den of murder and paint, Linda turns on her heels and runs screaming back to her room. The next day, Linda boards a boat for the island and - wait, what the hell? The next day? The hotel has all of two employees, she saw one of them carving up a woman like a plump Christmas goose, and she just spent the rest of the night in the hotel without incident? She didn't even call the cops. What a great protagonist. I sure can't wait to watch her exploits for another goddamn hour. That's it, I'm freaking pissed off. Time for a new page. I'm sick of this one.