What do you get when you take the best horror director in Hollywood, give him a chilling script full of quick-witted dialogue and plenty of screams, and add a solid cast of experienced actors? I don't know, but it sure as shit isn't "Killing Spree." Every character in this movie is like a horrible parody of an actual human being. The same could be said for the actors. "Killing Spree" hypes itself as a nonstop gorefest, but the most horrifying images in the movie come courtesy of several naked men suffering from varying degrees of obesity/back hair. Writer/Director Tim Ritter (motto: "A plot is where you get buried") achieves an almost Polonian level of nonsensical crapulence with this steaming log of insanity. Let's jump right in, shall we? Methinks we shall. 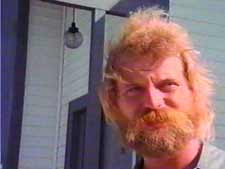 Asbestos Felt - the man, the name, the facial hair.

The first of many extraordinary moments comes in the opening credits, when it is revealed that the movie stars a man named Asbestos Felt. You can't go wrong with Asbestos Felt. That's pretty much the coolest name ever, with the possible exception of Deathninja McSex. However, the incredibly irritating music that plays throughout the entire credit sequence counteracts the coolness of Asbestos Felt's name, setting the counter back to zero. The action begins with Tom (Asbestos) pulling up into his driveway in his brand new 1987 Chrysler Whoops. As soon as he sets foot out of the car, two things happen: (1) the audience is immediately awestruck by Tom's ability to grow shaggy red hair of the same length around his entire head, and (2) Tom is approached by the meddling Mrs. Palmer. Mrs. Palmer is the neighborhood snoop and looks like she escaped off the set of Mama's Family. She casually chats with Tom about the horrors of giving her arthritic husband sponge baths until he excuses himself and goes inside. That's when Mrs. Palmer resumes her favorite activity - snooping! She's always got her suspicions about everything, and at the moment she is for some reason suspicious of the fender on Tom's car. Whenever she starts snooping, the Snooping Theme kicks into full gear. If you'd like to recreate the experience of hearing the Mrs. Palmer Snooping Theme for yourself, simply read the following passage at the top of your lungs (the pitch is unimportant, as the notes were apparently chosen by hurling marbles at a keyboard): 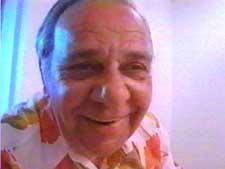 Gah! Even from here he creeps me out.

Hey, that was great! Inside the house, Tom's wife Leeza informs him that his best friend Ben is coming over for dinner. Tom immediately starts ranting and raving about what a jackass Ben is. Then Leeza tells him that she's making pork chops and he really gets mad. Yup, nothing says "protagonist" like going into a berserker rage over pork chops. Tim Ritter shows off his directing chops with a pointlessly quick zoom in and out to transition to the dinner. Ben, as it turns out, is a fat old pilot with serious denial issues. For example, he's in denial over the fact that he's thirty years older than his supposed best friend who actually hates him, he's in denial over his astounding ugliness, and he's in denial over his total lack of acting talent. Ben, Tom, and Leeza chat for a while, but I have no idea what about. Roughly half of the dialogue in "Killing Spree" is totally unintelligible thanks to the single worst sound recording job I've ever encountered in all my years of encountering sound recording jobs. What I could make out was something about Tom not wanting Leeza to return to her job as a stewardess. Then Ben yammers on about his new girlfriend, Angel, who just turned eighteen. It's staggering to think that any eighteen year old girl would ever lay a hand on Ben, even if he was fabulously wealthy or had her parents suspended above a tank of piranhas. Believe me, though, it all makes sense when you see Angel. Just wait. 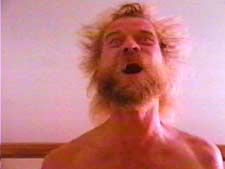 "Oh why did I have to sit on that beehive!"

There is a knock at the door. Tom goes to answer it and finds Mrs Palmer, who lets herself in. Her husband ate too many laxatives and now he can't get off the toilet. Lovely. While Tom goes to get her something to help, she steals one of his magazines and hides it under her shirt, all to to the tune of the Snooping Theme. Tom sends her on her way and returns to the dining room, only to find Tom and Leeza talking. Well, not "talking," exactly. Their mouths are moving, but no sound is coming out. That sort of technique is typically used when the main character can't hear the conversation taking place. In this case, Tom is all of three feet away, so I have to assume that Ben and Leeza honestly were just flapping their gums at one another, perhaps to cool each other down. Well, Tom isn't about to have some sixty-five year old lard deposit miming at his wife. He accuses them of having an affair and kicks Ben out of the house. Leeza tries to calm him down, and Tom explains that when his ex-wife cheated on him, it nearly drove him insane. BUM BUM BUM!

That night, the camera tracks in on Leeza and Ben having sex on the dining room table. Well, sort of. For some reason it is possible in "Killing Spree" for people to have sex through their clothes. It doesn't make any sense whatsoever, but considering the physical appearance of most of the people in this movie, it's a good thing. The door to the dining room flies open, revealing Tom, knife in hand and hair trying to flee from his face. Ben and Leeza mock Tom for a while, but the crappy recording plus the needlessly loud wind sound effect make it impossible to hear exactly what they're saying. All I can tell you is that Ben tells Leeza to give him head, so she wraps her colossal lips around his entire skull until white juices, the origins of which I don't even want to begin to contemplate, come squirting out. Cinema at its best, that's what this is. That's when Tom wakes up. It was all a dream. Well, duh. Either he was dreaming it was night, or that was one longass dream, as he immediately gets up and goes to work.