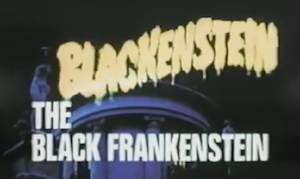 Overview: Come on, it's called Blackenstein for fuck's sake. No, it's not a coyly-named yet delicious dunkel brau, although watching it will definitely kill some brain cells.

The Case For: Seems like it should be a shameless ironic blaxploitation romp, but instead it features the most harmonious and even-handed treatment of race to come out of the 1970s.

The Case Against: Same as the case for. Also, it's really, really boring. Even by our standards.

What do you get if you take the director of Hellgate, forcibly remove all of the directing experience from his body, and then ask him to direct a blaxploitation monster movie? That's not a riddle, we really want to know. The number one question at the top of our minds after 90 minutes of Blackenstein was "what the fuck did we just see?", closely followed by the burning number-two question, "Why does Blackenstein look like the lovechild of a man'o'war jellyfish, a vat of molten latex, and Violet Beauregard on the tail end of a six-month blueberry binge?" Alas, you will not find answers to these zenlike brain-twisters here, but at least we can all commiserate about how goddamn stupid of an idea it was to voluntarily watch the directorial debut of the man who brought us Hellgate.

You might think that we got what we deserved for trying to watch a movie called Blackenstein, but you're wrong and dumb, because we didn't. What we deserved, and what we were expecting, was a B-grade cookie-cutter monster movie involving a dollar-store Frankenstein costume, a giant novelty afro, and lots of ironic jive dialogue and pimp-slapping. What we got instead was a movie that's blissfully, painfully unaware of how to make or watch movies, basic human ocular needs RE: lighting, scientific facts not found in a big dumpster full of rejected Star Trek props and irregular novelty hippy furniture, or even basic Scooby Doo levels of goofy fake monster lore:

"Patient is comatose, not responding following treatment with mysterious death medicine that seems to have killed him; etiology unclear, multiplying the Dethmorphan by arbitrary number and shooting it into his eyeballs this time, because that's really gross and freaky and Dr. Swanson bet I couldn't do it."

So anyway, usually when you sit down to watch a movie that goes all portmanteau with words like "Black" or "Brotha" and canonically-mashable tier 1 monster names in its title, you have certain expectations going in. In other words, that shit'd better be filled with electric-pink cadillacs with all-plush upholstery; wall-to-wall wah pedals; air kung fu (and/or kara-tay) with synchronized whipcrack sounds; constant, wildly inappropriate toplessness; and liberal use of the word "sucka". There is nothing even remotely funka-delic, -licious, -dunk, or even -dactyl in this movie. Not one pimp cane, 6" platform shoe, tire-sized afro, bad mother-- or Curtis Mayfield joint in the whole damn thing. All of which is weird, considering how this movie tries to bill itself: 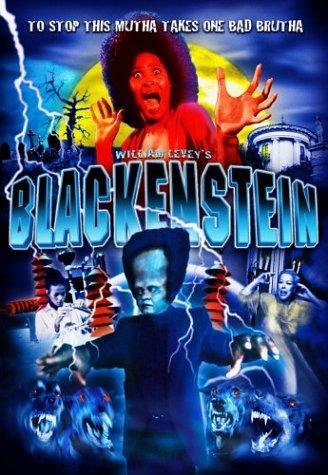 Let this be a lesson to aspiring filmmakers everywhere: if you really want to start your career off by throwing it and yourself under the stupid genre bandwagon, make sure to actually include one or two things from that genre.