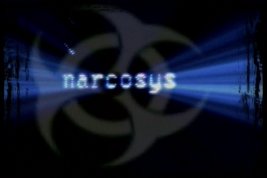 Overview: In a dystopian future, a gang of druggies take drugs, steal drugs, buy drugs, and do other various drug-related activities.

The Case For: So terrible that the very idea of drug use is tainted by mere association.

The Case Against: Ironically, drug use is the only possible way to make this movie enjoyable. 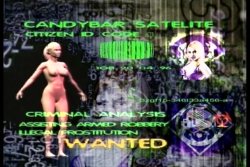 A member of the gang displaying her magical levitating tits.As amazing as it might seem to future generations, there was a time when "The Matrix" was actually cool, and people actually wanted to go around wearing leather trench coats and poorly designed sunglasses. Nowadays, of course, the concept is so played out that even Rob Schneider refuses to use it in his movies. Sadly, "Narcosys" was made in this brief period of "Matrix" hysteria, and we're subjected to actors dressed in clothes made out of petrochemical materials originally used to line human waste pipelines. They also take drugs. Lots and lots of drugs.

"Narcosys" opens in one of those dystopian futures that seems to be composed entirely of dirty alleys and abandoned industrial parks. There are some shots of big buildings with bad CGI screens pasted onto them, all of which show giant eyeballs for some reason. I guess this is supposed to signify the oppressive nature of the society and how some Big Brother is always watching everyone, just like in the other eight hundred films where futuristic TV screens show big unblinking eyes to signify the same exact thing. Additionally, there is stock footage of Tokyo scattered throughout the opening shots, showing how the Japanese have conquered the world, no doubt with their hyperadvanced "dirty alleyway" technology.

We are introduced to the main character, a girl named, improbably, "Matrix Monopoly". Perhaps the director thought that the film's inspiration wasn't obvious enough so he named the main character "Matrix". Or possibly she was named after Arnold Schwarzenegger in "Commando", as both share the distinction of starring in shitty movies. However, the name "Matrix" is downright banal compared to her partners in crime, introduced one by one as "Sin Tax", "Metro Confetti", and "Candybar Satelite". Note that I purposely misspelled "satellite" as apparently in the post-apocalyptic future, the Japanese have captured and subjugated the English language.

As each character is introduced they are accompanied by some sort of stats screen showing a lot of garbage text as well as a rotating naked Poser model which I guess is supposed to represent that character. Unfortunately the default Poser models barely look like humans, much less like specific humans, so the main characters either look like bimbos with enormous misshapen breasts or hulking men with big flaccid penises. I supposed I should mention that "Sin" and "Metro" are men and "Candybar" and "Matrix" are women, because their names are so fucking inane that there's probably no way to tell otherwise.

There's a voiceover by Matrix talking about how she's a death row inmate who has been hired by some random evil corporation to infiltrate a group of junkies for some reason. Apparently this is supposed to be the whole point of the movie, but after she mentions it for the first time it's completely forgotten until the very end. It's also questionable as to why anyone would waste their time infiltrating a gang consisting of three morons, but maybe there's a lot of death row inmates to go around. 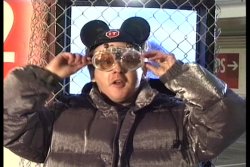 In the future, there will be morons.The four main characters drive around for a while, then get out of their extremely un-futuristic car and talk to some guy named "Orbit America" who wears Mickey Mouse ears and motorized windshield-wiper glasses. Orbit has such a thick Australian accent that it's impossible to tell what he's saying, but I imagine it wasn't very interesting anyway. Next thing we know, the four main characters are running through some random empty hallway while the lights flash on and off and an alarm sound blares over and over. Apparently they just robbed a drug facility but since the movie was financed by mugging ice cream vendors, there wasn't enough money to show them actually in the act of stealing anything. The four pile back into the car and drive away with their drug stash, beginning a series of similar events that will make up basically the entire movie.

Meanwhile, the movie cuts to a random dark alley. The only thing more moody than a dark alley is a dark, foggy alley, so someone just off camera sprays a fire extinguisher all over the place. Or maybe in the future there are machines that randomly spray fire extinguishers into dark alleys just in case something was burning in them. A guy wearing coveralls and a reflective vest emerges through the fog. His stats screen says that his name is "Zerox Drone." This is apparently important despite the fact that he doesn't have a single line in the entire movie. Additionally, it's possible that the actor was uncomfortable with having a naked Poser model on his stats screen, because instead there's a model of a skeleton with four arms. Maybe this is accurate and Zerox has two extra arms under his jumpsuit, but I didn't notice, or care. Zerox then walks down some random dark street and comes up to a television sitting on the curb. The TV is out of order, as evidenced by the big paper sign stuck on the screen saying "Out of Order." Zerox magically produces a screwdriver and pokes the TV a few times. This immediately fixes it, and Zerox carries it off. Maybe this is supposed to show that he is good with tools, or that he's smart, but neither of those have anything to do with the rest of the movie. It's more likely that the actor was actually just fixing his broken TV, since only someone flat broke would agree to appear in this film.

Just in case the movie doesn't have enough characters that no one cares about, it throws in a crazy bum, whose stats screen calls him "Sermon Newsflash." In an amazing coincidence, Sermon Newsflash spends all his time going around giving sermons, although when your mother names you "Sermon" there's probably a bit of pressure to go into that field.

The movie cuts back to Zerox, who has ended up loitering outside some condemned church. He puts down the TV and decides to shoot up with whatever super-drug the Japanese have invented in the dismal future. The actor must be dedicated to method acting, because he actually really sticks a needle in his vein and injects himself with something. It's likely that the entire movie was made under the influence of drugs, so maybe this isn't as strange as it seems. Suddenly there's some sort of Matrix-esque computer screen announcing "INFECTION INITIATED". Apparently the drug that Zerox shoots up is actually some sort of super-virus, although like everything else in the movie, it really doesn't matter.