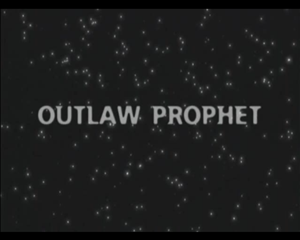 Overview: No more good movies for me. Outlaw Prophet is the brainchild of one David Heavener, the artistic genius who brought us a bunch of shit that no one has ever heard of. Do you want a movie that combines space aliens, reality tv, the Good Lord Jesus and plastic nick-knacks from the '80's passing as intergalactic star cruisers? Then why don't you take my job so I don't have to watch movies like this anymore!

The Case For: If you like getting wasted and watching ridiculous movies, this is an excellent choice.

The Case Against: You wouldn't even understand what was going on if you weren't a sickening substance-addled failure. 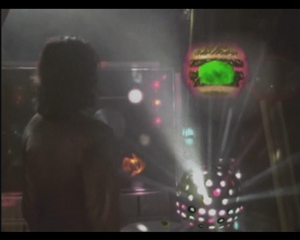 Oh my, this is going to be a doozie. Meet John 141, just your average greasy-haired extraterrestrial and the star of the most popular reality TV show in all the galaxy! Alas, it's not all glamor and triplebreasted groupies for Johnnie, because every episode of "Escape 2020" has him racing the clock to save an entire planet, which I guess in this case Earth. I think. I can't really explain what's going on in the beginning because most of it consists of John screaming, galloping through highly futuristic black-lit corridors, and telepathically exchanging obnoxious one-liners with this disco-ball thing. Anyway, what I got out of it is that John is a highly tormented individual, and he really hates being enslaved by his evil Producer King boss.

For some doubtless impenetrable reason, producers and the tv/film industry in general take a lot of shit in this movie. Producer King and his homies run the galaxy with a poorly-crafted latex fist, killing people who don't bring in high enough ratings and psychologically torturing John through what appears to my Earth eyes as a radioactive floating hamburger. I really can't imagine why world-renowned drama legend David Heavener would have any beef with the film industry, seeing as his website shows him to be a highly valued Hollywood superstar:

"Well fuck you, Hollywood!" says David Heavener. "If you can't recognize my incredible power boating and child rearing skills, I'm going to have to write, direct, and star in a movie myself!" Indeed, Outlaw Prophet shows those Hollywood hep cats exactly what David can do. We've got awesome special effects, like this futuristic interface that looks nothing at all like Windows 95, or these spaceships inspired by treadmarks on a dog turd. What about the pulse-pounding combat sequences between John and fearsome "aliens" slathered with greasepaint who sort of wander around for awhile and then fall over? There are even a few fights with the Producer King, who for some reason morphs into an ancient Egyptian aerobics instructor whenever he does battle. Why, if producers can't appreciate David-John-Jesus' handiwork, it's no wonder they're portrayed as nimrods in rubber who like terrible sci-fi movies rescued from dumpsters! And also as Satan.

So after some heavy-duty punching John finds himself in the town of Paris, Tennesse. He soon meets a 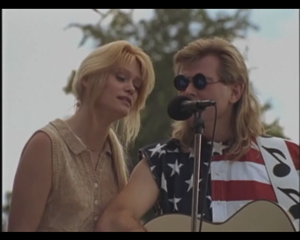 Merrymakers at a church picnic. As a note, all of these characters use "Jesus loves you" at the end of clauses as if it were a punctuation mark.hippie girl whose real name I don't remember but whose alias is "alpha2moonchick," which I'm 98% sure is a better name and also a potential AIM handle. Like many young ladies her age, she spends her time trying to get the attention of mysterious otherworldly lifeforms, except instead of teenage boys we mean space aliens, and instead of using tight shorts with things like PUSSYVADGE slapped on the ass, she uses Jesus. No, really, there is a lot of Jesus in this movie, which doesn't become overwhelmingly apparent until John wanders into a church picnic. I was pretty disappointed in this scene at first, as I thought Heavener was being disrespectful of religion by portraying the religious as a bunch of slack jawed, cow-eyed white yokels with missing teeth and a tendency to waddle up to strangers and . But nope, turns out Dave is trying to be deeply respectful of the Lord here! ...but we'll get to that later.