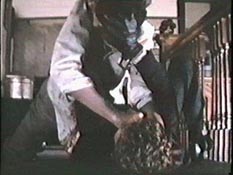 A shot from the grand finale of good vs. evil. Oh yes, that's the good stuff, baby.At this point in the movie, our hero has reached a grand total of two different facial expression, both of which could pretty much be summed up as "vaguely confused". I was fortunate enough to grab a series of screen captures that show off the wide array of Robert Glaudini's (the mannequin that played the role of "Paul Dean") acting skills. Check it out and prepare to be amazed.

Back to the movie: cut to the bad, one-gloved guy, who is talking with ol' Pappy, asking if he's seen Dean. Pappy lies and says he didn't, although there's really not any reason why he wants to cover up for the bonehead. Maybe they had some kind of sexual thing going on, but it was edited out in the final cut. Mr. One-Glove shoots Pappy with a laser beam that comes out of his shirt sleeve, chopping off the geezer's hand. The bad guy then drives to a "futuristic" gas station, which you can tell is "futuristic" because there's some kind of pointy cone things on top of the gas pumps. The bullies / gang members / idiots trap the bad guy, then let him go for no readily apparent reason (don't worry, I don't have any clue what's happening at this point either). Turns out Mister Bad Guy works for "The Merchants" and hired Dean to make a virus for them that would kill a lot of people, but Dean tried to destroy it when he found out what it would be used for (to kill a lot of people). Jesus Christ, the guy spent years developing a parasite that has the sole purpose to kill people, and then, when it's about to be completed, he suddenly realizes that it's going to be used to kill people? How stupid is this guy? That's like me working on a webpage about golden showers for a few months, and one day thinking "hey, this site's about GOLDEN SHOWERS!" and trying to take it down. Not that I've designed a site for golden showers. Or that I have a few hundred megs of pictures on my hard drive or anything.

Anyway, the parasite is still working its magic on Zeke's (the bad gang member's) leg. Eventually he dies, so the parasite (which now looks like a lump of dough with teeth) jumps onto a female gang member. She then begins to turn blue, which I guess is a side benefit of having dough on your leg. The gang members and the bad guy get into a fight for some vague reason, and it ends up being less exciting than your average funeral procession (and much longer). Dean discovers that he can kill the parasite by shooting sonic beams at it, so they grab the oscilloscope and start playing high pitched sounds. The parasite scurries away and hangs from the ceiling above the makeup-encrusted hag who runs the hotel. It drips slime all over her hand for about 30 minutes, and she doesn't bother reacting or looking up until it's JUST about to fall onto her. It turns her into a zombie and makes her slightly less attractive than she normally was. The bad guy storms in and "demands" the parasite, and in an absolutely STUNNING moment of irony, it jumps onto his face and causes him to be blown up. Fade to black, credits roll, director fades into obscurity. The end.

This movie was not entertaining. It was not amusing. It's plot was about as deep and complex as an engraving on your average tombstone. The only good thing about this film is knowing that I can return it to the movie store tonight, instead of allowing it to sit on top of my VCR where virtually anybody can see it. Sure it had Demi Moore, but her career is still too nonexistent for this film to have any potential "humiliation" factor yet. Let's wait a few years when she's either a successful movie star or Hollywood crack whore. Until then, don't risk it.