The Border of Tong 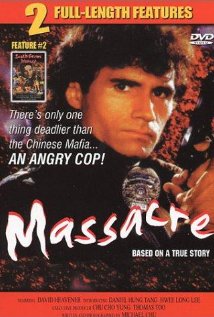 Overview: A couple of slack-jawed idiots decide to knock over the world's saddest backroom Chinatown casino for a literal fistful of dollars (and practice tying everybody inside up with 500 miles of rope for their burglary merit badges while they're at it) until something goes terribly wrong and everybody spontaneously gets murdered for no apparent reason. Now one of them is on the run in 80s Canada being relentlessly pursued by the worst psychic detective the 80s have ever seen: David Heavener...but will a miraculous break in the case be what Heavener needs to deus ex machina his way to real final ultimate crime justice? Yes, it will. The end!

The Case For: Rocking original soundtrack consists of Yoko Ono's cover of Chopsticks, Chopin's Nocturne for Uncomfortable Asian Sex Op. 42, and of course who could forget Barber's Adagio for Suicide by Cop

The Case Against: Starts to sound like it might be the 80s Asian equivalent of Zombie 90 at times, but then it never quite devolves into full fart noises and sputtering, unfortunately. 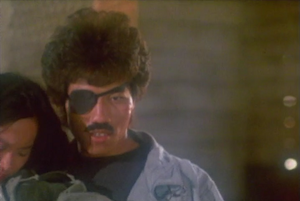 We had such high hopes for The Border of Tong (a.k.a. Massacre). Just look at that goddamn DVD cover. Everything about that cover screams '80s martial-arts extravaganza cop movie, and starring a guy named "David Heavener", which is just a great name for a giant-haired uberhunk who probably has at least a triptuple black belt in Kick-Fu Do and Way of the Mullet Sow. What we got instead was wall-to-wall broken English dubbed exclusively by voice artists with severe influenza, and a plot which revolves rather heavily around folding origami crickets. As for man of the hour David Heavener, well, this little highlight reel probably sums up our overwhelming disappointment:

Establishing shot: midday, empty Canadian highway. DAVID HEAVENER steps out of his piece of shit Chrysler LeBaron and kicks the side of it, tripping in the process.

As you can see, for a psychic badass mulleted 80s martial arts detective cliche, this Heavener guy really isn't all he's cracked up to be. Obviously we're lying about the psychic part to make fun of what a shitty detective he is, and you know he's probably not going to be nearly as much of a badass as he thinks he is going into it, but this guy isn't even a martial artist as far as we can tell. Shit, it's a kung fu cop movie shot entirely in Chinatown in the middle of 1985 and the dude doesn't even manage to pop his shirt off once or find a special occasion for "bring your nunchucks to work day" in 90 fucking minutes. What a gip. Do yourself a favor and wok away from this one.

Leading man aside, all of the ingredients were in place here for a solidly mediocre C- crime drama, something that could occupy a comfortable, slightly dusty spot on the bottom-middle shelf in the "Action" section at a video store. Unfortunately, those ingredients are tied together by the worst fictional detective story since that "Sam Spade Finds a Doggy" book targeted at mentally deficient preschoolers. The crime makes no sense, the police alternate between total uselessness and deus-ex-machina perfect timing, and the less said about the action parts the better.

The festivities kick off with a gangland heist involving an underground gambling parlor in Chinatown, featuring reluctant robber Joey Wong and his best scum-of-the-Earth buddies. We have to commend them on their choice of targets, since as far as we can tell the bouncer will just open the door for anyone who wanders by[1]. On the other hand, maybe they're not so smart, because the heist (or "Ocean's Tree Fitty", as we've taken to calling it) nets them about $600 in cash in exchange for multiple homicides[2].

At least Joey makes it away with all the cash; his comrades in arms are immediately caught, leaving every cop in the city looking for him. Thus begins a confusing, arduous, confusing, emotionally conflicted, but really mostly confusing journey, in which Joey calls his mom, drops by his uncle's movie theater, moves to Calgary, crawls out the window of a whorehouse with a prostitute, gets mugged by the only two black people in all of Canada, and ends up living in a seedy motel and selling origami crickets on the street because he sucks so much at armed robbery. Of course, it's possible that the confusion we're sensing is mainly due to the dubbing and/or dialogue so atrocious that even the goddamn characters can't understand each other sometimes:

Don't worry, though, ace sleuth David Heavener is on the case! Come to think of it, maybe you should worry, since it takes him over a year to catch up with the elusive Joey. This isn't surprising, because his detectiving resume is so terrible that if the mayor ever saw it, His Honor would be so far up the Chief's ass with a 50cc go kart that the Shriners would make him an honorary member on the spot.

Fortunately, far outside his own jurisdiction on the mean streets of Calgary, D to the H breaks the case wide open when he finds out that Joey is living in Chinatown. Yes, the Chinese kid who lived in Chinatown in Seattle all his life and robbed a Mah Jongg parlor owned by the Chinese mafia decided to hang out in Chinatown again, who would have thought? Then he gives up and goes home, but his niece happens to live in the exact town where Joey fled to, happens to buy an origami cricket from him, and then happens to mail the cricket to her goddamn uncle. The same cricket that Joey folded a dollar bill into during the heist and then left at the crime scene. We couldn't make this shit up if we tried.

In short, if you've ever wanted to watch The Maltese Origami Cricket, with an all-star cast of Asian guys with severe head colds and voice coaching by the guy who did those GI Joe PSA videos, then pop The Border of Tong into your DVD player and get ready for an evening of delight.

[1] Our alternate theory is that the secret password is literally nothing, i.e. if you do or say anything at all except stand there scowling then you don’t get in.

[2] When your armed robbery/murder spree is netting you less money than digging up people that are already dead and selling their parts, maybe it’s time for a career change.