Overview: Ah, the 1990's. Who can forget the period in time when all B-movies tried to promote "soft science" as much as possible? In case you're not familiar with the concept of "soft science", here's a quick rundown of the entire notion:

1) There are bugs and animals in the world.
2) There are chemicals and toxic waste in the world.
3) Combing elements 1 and 2 will result in producing a horrible mutant who's immediate concern is killing or at least critically molesting the majority of the human race.

The Case For: Many rednecks dying.

The Case Against: Head villian is so ugly that merely seeing him will cause your children to be born with horrible scars. 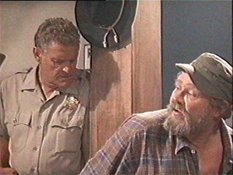 Nothing says "quality" like a good redneck ass examination.

You may remember famous examples of soft science from literary classics such as "The Incredible Spiderman", "The Amazing Spiderman", "Peter Parker: Man of Mystery", "The Incredibly Amazing Spiderman", and "The Moderately Intelligent and Somewhat Physically Appealing Spider Man", all of which taught us that mysterious toxic waste does remarkable things, none of which include fatally poisoning you. The B-movie industry picked up on this idea and ran with it as far as they could, delivering gems like "Ticks" and that one film where the fire-spitting moths flew into women's hair and caused them to flame up quicker than a plastic K-Mart Christmas tree. I can't think of that movie's name offhand, as my initial guess of "Please Duck or At Least Wear a Hat, Ladies, Because Here Comes The Fire-Spitting Moths of Terror!" doesn't seem to be an actual film (according to the IMDB).

Well forget about wussy mutant killer insects like ticks, moths, and, to a lesser degree, storks, because there's a new genetic freak in town! August Entertainment, who's name must refer to the entire amount of time it takes them to produce one of their movies, delivers up the steaming stinkwad "Skeeter", a film which proves that a little lovin' and generous amounts of toxic waste is all nature needs to start racking up a body count larger than Russia's national debt.

"Skeeter" begins its inevitable parade of awfulness by introducing some intensely exciting footage of trucks driving through the night. Sometimes the trucks drive to the left of the screen, other times they drive to the right. On rare occasions they drive TOWARDS the camera which would probably be very frightening if you were watching this on a large screen television. Then again, if you're able to afford a large screen television, you probably have enough sense to stay away from renting a film revolving around mosquitoes that prey on rednecks. The movie soon reveals that these illegal trucks are transporting illegal toxic waste to be illegally stored in an illegal cave. It's an ultra hush-hush, top secret operation, so they avoid drawing any attention to themselves by driving a caravan of approximately 500 trucks in rapid procession to the dumping grounds. You know, it's one of those "publicly secret" operations. Nobody would suspect a thing! The waste dumping is handled by an intensely ugly man, who I suspect was put in the movie just so he could prepare us for the barrage of charismatic failure that the main villain delivers.

Cut to the next day. A fine piece of white trash is screaming and stumbling out of the previously seen cave. He jumps on his motorbike and peels away, fleeing from some horrible, flying, unseen entity that is chasing him. The movie never shows what was following him, so I'll assume it was one of those robots that bump you around from the Apple IIC game, "Airheart". Apparently the sheer terror of being chased by this creature is enough to cause the idiot to drive off a cliff, so he proceeds to do exactly that. Perhaps the robot bumped him off the road, I don't know.