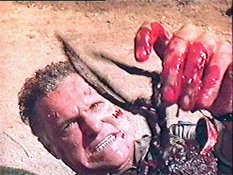 This is supposed to be the damn appetizer?The mutant attack mosquitoes, which I had almost forgotten about at this point, soon claim their second victim, another redneck wearing plaid. They swarm all over the poor fool and choke him to death with the completely visible black strings which hold them in the air. I suppose I should care or at least feel sorry for the guy, but somehow I ended up wishing to see him writhe in pain longer. Joe Cool and The Crazy Drunk Indian (who is drunk at the time) find the dead guy and The Crazy Drunk Indian starts doing some Crazy Drunk Indian dance around a bunch of flares. Those wacky Crazy Drunk Indians! Their culture is different then ours! That's comical and a source of humor!

Cut to the next day. The love interest is parading around the wilderness on her snotty little horse when she witnesses the devastation left by the evil Drake: a swamp with a skeleton next to it and an overturned motorbike. Parents, if you're watching this movie with your children, you may want to cover their eyes during this scene. While you're at it, cover your own eyes as well. If you don't have any extra hands to cover up so many eyes at once, I'd recommend hiring any of the actors from this film to help you; chances are good that none of them have seen work since starring in this bomb. Joe Cool and the love interest reminisce over how good and lovely and peaceful life was before Drake started building houses everywhere and creating mutant death bugs. I don't blame them. Downtown Los Angeles used to be a great place until the killer mosquitoes moved in. Then it all went downhill. Don't even get me started on all the new houses springing up there.

A bit later, in some random location that we apparently shouldn't be concerned with, some idiot starts driving his beat up Chevy around like a meth-ed up crackhead junkie pill-popping... uh... drug user. He gets out of his car and is immediately attacked and killed by the Satanic mosquitoes, which are now making jetplane noises for some inexplicable reason. The camera films part of this scene from "Skeeter Eye View", which is just like "Normal Eye View" except the camera shakes a lot, is 99% yellow filter, and travels at the speed of a handicapped baby. To experience "Skeeter Eye View", click here. With such absolutely lousy vision, it's a miracle the mosquitoes are even able to fly in a straight line, much less hunt down rednecks from a hundred feet away.

Drake finds out that Joe Cool is planning to destroy his evil suburban home empire by revealing the evil death mosquitoes of... uh... death, so Drake sends a fat guy over to beat him up. The fat guy, being so fat and possessing slightly more combat knowledge than your average meter maid, is able to beat up Joe Cool and take him out to the desert to shoot him. Unfortunately his plan is foiled when the Hell mosquitoes fly in and suck all seven million gallons of blood from the fat guy's body. Okay, so maybe the bugs just rammed the fat guy until he fell down, but it's all the same general idea.

The geology guy, who won't be content until he's sampled every square inch of the entire state, goes into the toxic waste cave with the love interest. They see all the spooky and scary mosquito eggs laying around mounds of toxic waste, and before they can look up how to appear "surprised" in the Official Acting Book, the evil Sheriff Buckle comes in and prepares to shoot them both! Luckily "Skeeters" is an exercise in poetic justice, and the sheriff is killed when all the evil mosquitoes fly right past the geologist and the love interest, and pester the Sheriff to death. How surprising! The love interest, being a female in a B-movie and therefore having the coordination of a grain silo, falls into a pit and gets stuck there while the geologist runs away. Luckily the love interest protects herself by moving some aluminum siding over the hole. Genius!