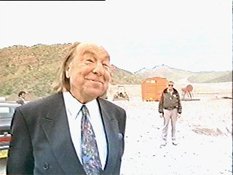 Run! He's infecting the town's water supply with UGLY!After all that initial excitement settles down and we have a chance to change our collective underwear, the movie proceeds to introduce the main character, who is arc welding without wearing any shirt. Most of the "cool" welders these days shrug off sissy crap like shirts, goggles, or pants while welding, because that shows they're REAL men. Well, real men with no eyesight and plenty of burn scars all over their malformed chests, but still real men. To show that our hero, Joe Cool (his name was "Roy Boone" but screw that, he's too damn hip for such a lame name) is a true rebel, he also has a motorcycle. A motorcycle which he rides with his shirt buttons open! And NO HELMET! I was just waiting for them prove how rebellious the guy is by filming him fishing... WITHOUT A FISHING LICENSE! WITH HIS SHIRT BUTTONS OPEN! AND NO FISHING HELMET!

Joe Cool pulls up to the Clear Sky Police Station, which appears to be a converted gas station (I can't quite answer what it was converted to, but it was converted to something different). Ernie Buckle, the Sheriff of the town, gives Joe Cool a hard time because while Joe Cool is gallivanting around town being young, handsome, and hip, Ernie Buckle is busy being old and developing new bowel dysfunctions. Joe Cool walks into the police station and we're all treated to a spicy scene of him taking off his shirt and... what's this... putting on a Police uniform? Yup, Joe Cool is a member of the law enforcement community! How crazy! Joe Cool, Sheriff Buckle, and some Native American (I forgot his name, but since the movie essentially treats him like a stereotypical Native American, I will refer to him as "The Crazy Drunk Indian") head off to a funeral where they meet the love interest, Sarah. Despite being at the funeral for her own mother, Sarah elects to wear an outfit that would look even too slutty for an E3 booth.

Following the unpleasantries of a remarkably tacky funeral, the movie introduces one of the most hideous and disgusting creatures to ever grace God's green Earth. No, I am not talking about the Express.com president, I'm referring to a sinister monster known only as "Drake", the evil and money grubbing land developer. Drake wants to erect thousands and thousands of new houses in Clear Sky, and if this requires him dumping countless gallons of toxic waste into caves, so be it. I think Drake really just wants to see his construction equipment dig huge craters into the ground so he can get some kind of revenge against God for bestowing him with such vile divots in his face.

Speaking of craters, Drake is one ugly freak. I'm not talking "I don't want to sit next to that guy on the bus" kind of ugly, I'm talking "nailbomb exploding in a gradeschool" kind of ugly. The guy's got eyebrows the width of bridge support cables and a complexion that resembles the aftermath of a jackhammer assault. One look at Drake's face strengthens any atheist's claim that there is no God.

Drake, being the evil overlord he is, wants to pave over everything so he may continue his evil and unspeakable plan of - hold on to your Underoos here - building houses for people to live in! Yes, the evil real estate salesman of death strikes again! I can't think of anything more nefarious than wanting to develop land!

The movie (thankfully) cuts to a local bar, where "Larry" of the Larry, Daryl, and Darrel trio from TV show "Newheart" walks in and proclaims himself to be from the Advance Geological Inspection Agency. He is instantly scorned by Sheriff Buckle (who is being paid off by Drake), so the geologist leaves to go check out the water quality in random hillbilly's bathtubs. You know, just like the dream job of any American schoolchild.