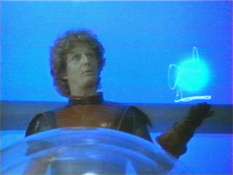 Look, it's a special effect!So Akton and Stella Star, who got busted by the Imperial Police, are sentenced to 220 years of hard labor in some penal colonies. "Hard labor" in the future consists of being forced to move large white balls and drop them into a round pit while people shout "Move faster! Come on, let's go!" in a monotonous voice. Stella gets tired of this cruel and painstaking "torture" so she incites a riot by pretending to punch one of the guards. Soon all hell breaks loose and Stella is able to escape from the camp by casually walking off the set. The movie then goes to a picture of a spaceship exploding and then cuts to Stella running around in some weeds. Don't ask.

A ship lands near her and she immediately boards it. The crewmembers reveal themselves in a particularly dramatic and exciting scene that rivals the ending to "Leprechaun 2". Turns out that the ship was piloted by none other than the Imperial Police, who are a bald blue guy and a robot from Texas named "L". They fly off to the Imperial Flagship, an even larger piece of floating yellow plastic in space. The Emperor informs our band of heroes that Count Zarth has a really large gun that "would take an entire planet to house." This gigantic gun is on the Count's space station, a floating metal glove which the movie claims is "very large", even bigger than a planet. The Emperor doesn't mention how powerful the gun is, he just stresses how really huge it is. I guess the Count was planning on using the gun to just manually bash the planets with it, like a baseball bat or something. 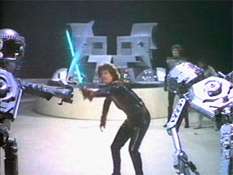 Our heroes land on some zany planet and are attacked by Amazon women, a gigantic robot with a scimitar, some Neanderthal people, and eventually the red blobs. During a particularly heated battle with a gang of toothless vagrants, a mysterious man in a mask comes to their aid by shooting laser beams from his eyes at the primitives. They run off to a cave and the man takes off his mask, revealing his true identity... none other than DAVID HASSELHOFF! Yes, International Superstar David Hasselhoff has one of his best roles since he played the part of "Boner" in "Revenge of the Cheerleaders" (I'm not making that up).

Akton and crew find the Count's secret underground headquarters by entering a cave and walking forward until they find some large doors. They enter the unguarded, top-secret base and try to shut down the "automated computers" (like there are many computers around that aren't automated) but the Count shows up and ruins their plans. Instead of killing them, he decides to order his evil robots to guard them while he leaves and blows up the planet from a safe distance. Our heroes decide that this plan won't benefit them in the greater course of events, so Akton pulls out his glowing-blue-sword-that-looks-alot-like-a-Light-Saber-but-isn't-due-to-copyright-reasons and engages the robots in a swordfight. He wins, but one of the robots slightly cuts his shoulder. This turns out to be a critical hit and Akton says he can't fight anymore, so he sits down, flashes a bunch of different colors, and then disappears. Oh yeah, before dying, he also admitted to being able to see the future or something like that. I didn't really follow the whole thing because it didn't make any sense (it matched the rest of the movie). 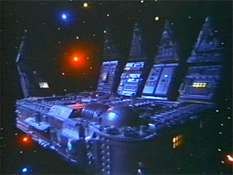 Hey, can you give me a hand here? Oh sorry, that's the Count's space station, my mistake.

David Hasselhoff and crew escape by somehow stopping time (the Emperor's ship has the ability to stop time for three minutes. No explanation is given), meet up with the good and kind Emperor, and then wage war on Count Zarth by commanding random people to fly large marital aides through the windows of his space station. A great firefight ensues inside Zarth's headquarters, and all of the Emperor's men are killed because they fight like little girls. So Stella finds an abandoned space city and pilots it into Zarth's ship, causing it to explode in one of the longest, crappiest, boring scenes in history.

I actually found this film to be more refreshing than the actual "Star Wars" it ripped off. In my opinion, "Star Wars" looked too good, had a plot that wasn't confusing enough, and characters with too much charisma. The hastily-assembled, cut rate spaceship models made me crack up every time they flew into view. Count Zarth's mysterious "really large gun that doesn't do anything" helped the plot progress with the ease of a lubed up cucumber. "Star Wars" doesn't have anything on "Starcrash". And it certainly didn't have David Hasselhoff shooting eye-lasers at ape-men in it.