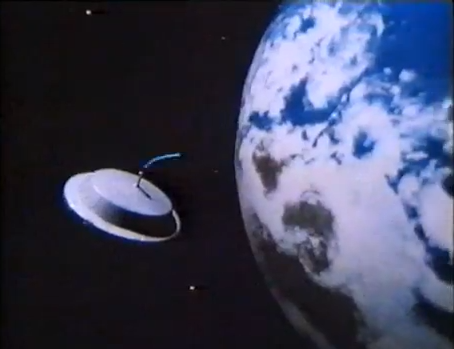 So the bad aliens (not to be confused with the good aliens - who have weird bulky thumbheads and don't dress like sexually confused chess pieces) kick off the titular Project Genocide by revealing their ultimate doomsday weapon: a scary-ass death ray. Well, actually it's more like a ray that makes you sort of feel like killing yourself, maybe. So like a severe clinical depression ray, you might say. Also, it's not so much a weapon of mass destruction as a thing that shoots one random person every twenty minutes or so and strongly encourages them to off themselves in aisle 3 next to the toaster strudels. Still, though, pretty scary when you think about it.

With the extinction of the human race imminent in just a few short millennia, our only hope as a species is...the trans-galactic equivalent of the United Nations. Yep, the saviors of mankind turn out to be a bunch of pasty white guys with butts for heads, and their lazy dumbass bean-can robots. There are some human characters running around too, including Robert Vaughn as a smarmy UFOlogist who gets treated to a combination kidnapping and surprise party in his own backyard:

His wife passes out, clearly overwhelmed with euphoria that her insufferable alcoholic husband is finally being taken away to some distant galaxy to be probed and tortured and never seen again. And so Robert Vaughn jets off into the stratosphere, joined by his much less forgettable co-star, Robert Vaughn's Fucking Chin, which we're pretty sure moonlights as a fully functional claw hammer and industrial whetstone. Although usually bitter rivals, it's genuinely touching to watch the two put aside their differences and join forces to save mankind from certain invasion(s) by helping the highly evolved buttface aliens do the one thing they never dreamed possible with their giant, butt-shaped brains: 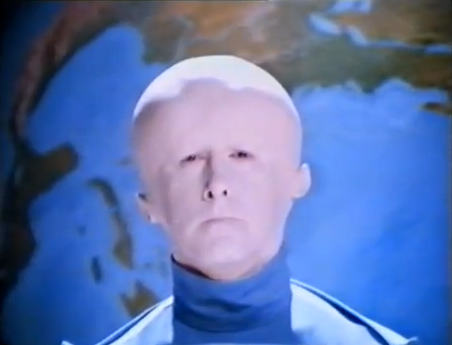 HeadOn! - Apply directly to the forehead! Warning: side effects may include albinism, telepathy, and cranial scrotumization.But you don't master the infinite complexities of intergalactic travel and bridge the vastness of space to unite billions of sentient races across thousands of worlds just to go pick up any old some guy's friend at his house - that would be fucking ridiculous. This some guy's friend happens to be the Neo of some guy's friends, except even cooler because he drinks alone a lot and pretends to smoke a pipe and instead of doing boring karate shit he pushes buttons. He is the Chosen One - the arithmetical ubermensch who saves humanity by pulling a reverse Independence Day (rID4), fixing the pro-Earth aliens' computers by heroically mashing his sweaty, bourbon-ravaged palms into a jumped-up pocket calculator.

Armed with all the powers of the Casio corporation and some utter horseshit about unlocking 100% of their human buddies' brainpower, the thumb-headed peacekeepers set out to save the day in a series of intensely confusing dogfights, all of which make us long for a direct-to-video Wing Commander sequel produced in some nerd's basement just to cleanse the palate.

But never mind all that, because the several hundred ships they shoot down have no bearing on the actual plot. No, the real heroics are going on back at space-U.N.-HQ, where their factory-reject robot has slowly lurched itself back into action and proceeds to go all robo-Serpico on the bad aliens' asses, killing the rest of their flying saucers with some well-placed button mashing of its own:

With his evil plan foiled, Christopher Lee takes the coward's way out and kills himself by smashing into the moon at top speed. What an ironic death, just like rain on your wedding day, assuming the rain makes you want to kill yourself.

So, after the dust has settled, what have we learned from Starship Invasions? That humanity's role in the cosmos is insignificant, and we can only really stare slack-jawed while alien forces we can barely comprehend battle around us? Or perhaps this is an allegory for the real United Nations, as a true force for good in a world full of tyrants and soul-crushing horrors that would make anyone want to kill themselves? No, we're pretty sure the real moral is that goddamn robots just can't be trusted. As soon as you turn your back on them, wham, they give you a full-force back rub and you're on the ground with all your friends being disintegrated around you. Remember, kids, never trust a filthy robot. Or Christopher Lee, for that matter. Starship Invasions told you so.