The plot: Lundgren's special agent is recruited to accompany the head of the NSA to a secret meeting in Romania. Upon arrival at the rendezvous, a spacious hotel outside Bucharest that has been completely evacuated for the top-secret meeting, the team is suddenly besieged by endless waves of attackers. The good news is none of them are identifiable or remarkable in any way; the bad news is apart from Lundgren, none of our heroes are either, which didn't do a helluva lot for my interest level in the eventual outcome. 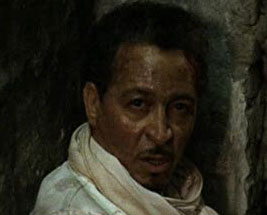 Terrorist or despondent Patriots fan? YOU BE THE JUDGE We find out as the plot unfolds that the meeting was between our head of National Security and top-rated terrorist Mohammed Jamal, who is established in this film as a Bin Laden-esque, Public Enemy Number One type rascal. NOTE: I'm about to spoil the entire plot here so please continue reading as it will successfully slam the door on the possibility of you ever watching this film. As we discover amid the hail of bullets that accompanies literally the entire remainder of the movie, Jamal is actually a CIA agent who apparently has successfully established himself as the top terrorist in the world solely for the purpose of rooting out a plot to overthrow the president. That's right, folks! If you're having trouble rooting out the logic behind this move, get in line, please. This stunning development sets the stage for the creepy Arabian terrorist guy to suddenly start talking in perfect American. Guess he sure pulled the wool over those dumb ragheads, huh? Waaaaaait a minute&he pulled the wool over all us media whores, too! Thus everything we are fed by the spin machine is a dirty political lie, no one is innocent, and I owe Dolph a beer.

When I mentioned a hail of bullets above, I was not exaggerating. The amount of ammo sprayed around in this flick makes Equilibrium look like Little Miss Sunshine. Everyone shoots lots of guns real good, and a couple of cars get blown up real good. Dolph shoots a sniper with his little Beretta real good, despite the fact that the dude's, you know, a fucking sniper. One by one, Dolph's team gets shot or blown up real good. With names like Parker, Lee, and Stevenson&let's just say I needed an extra box of tissue as one by one these brave, meticulously crafted characters fell prey before Lundgren's pitiless lens. Put another way, the emotional impact was slightly less than that experienced in Saving Private Ryan and probably more in line with that mellow pang of regret you get when you take the last Oreo in the first row and realize that yes, you're a third of the way through the pack. I don't ask for tears and sullen introspection upon the death of a character in an action flick, but I do ask that I give something remotely resembling one tenth of one shit. The Defender is the wrong movie for that kind of deep emotional commitment. 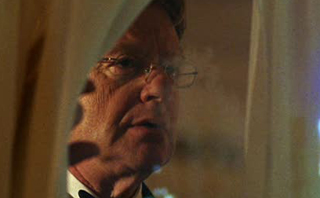 Other reviewers have made a big deal of Lundgren's directorial chops, and I will concede that the action scene (that's 'scene', singular, because the last 3/4s of the movie is one long wearying brainless firefight) is competently filmed, although this has more to do with the editing that with the actual direction of the movie. Lundgren and his band of saps battle gamely into the hotel's basement, through the elaborate sewer system, out of the sewers into the woods, and then through the woods right back to the hotel, probably because if you're got a set piece rented through the end of the week, then goddamnit, you'd better get as much use out of it as you can. Eventually night falls and I guess the bad guys run out of bullets because things just kind of peter away. There's a shocking betrayal which carries all the shocking shock of taking off a sweater really fast and touching something metal, and then we get Dolph retiring, possibly to pursue elective facial surgery. We also get Jerry Springer in a State of the Union address offering the cryptic observation, "We will either be free, or we will not be." Thanks for that, Jerry.

What qualifies The Defender as Advanced Crappy viewing? Awww, nothing, really, I was messing with you, it's Basic Crappy like everything else I'm forced to review in this horrible job. The moral of the story is don't overanalyze things. We've got enough problems being hoodwinked by international terrorists and CIA conspiracies to get wrapped up in that nutty balderdash. Just make a Basic Promise and an Advanced Commitment to Defend the hell out of yourself from this terrible DVD, which shouldn't be too hard unless your cable box is broken and permanently stuck repeating the 3:30 AM slot on Cinemax.