A woman in Australia has been killed by her pet camel after the animal may have tried to have sex with her. The woman had been given the camel as a 60th birthday present earlier this year because of her love of exotic pets.

The camel was just 10 months old but already weighed 152kg (336lbs) and had come close to suffocating the family's pet goat on a number of occasions.

On Saturday, the woman apparently became the object of the male camel's desire. It knocked her to the ground, lay on top of her and displayed what the police delicately described as possible mating behaviour. "I'd say it's probably been playing, or it may be even a sexual sort of thing," the Associated Press news agency quoted Queensland police Detective Senior Constable Craig Gregory as saying. 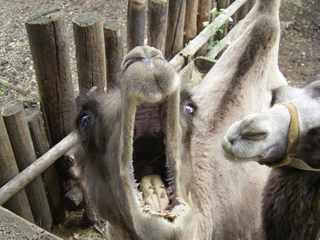 raperaperapeDespite my sometimes cruel and crass humor, I do have limits of taste. Some things cross the line, and one of those things is rape, which is never funny, unless you're raping a clown, and the clown is telling a lot of jokes because that's the only way he can deal with the pain, because he ran away from home to join the circus and did terrible things, horrible things, unforgivable things, and he just wants to cry, cry on mama's shoulder, like when he was a little boy with hopes and dreams and comically oversized feet, but the makeup dried out his ducts and made them a desert of despair, barren of tears, and this, I think, is the cosmic tragedy of clowns.

In any case, I figured this unfortunate incident must have been a consensual act. It seemed to me that if anyone wanted to escape the unwanted advances of a camel they could just walk away. After all, camels are built for sand, not speed. It was only after I did some background research that I found out camels are the cavalry of the Middle East and can actually sprint at speeds of up to 40 mph over short bursts, which makes this beast the second speediest sexual predator in the world, just behind Pee Wee Herman and his magical rapecycle.


A whale has died after being harpooned and shot with a machine-gun by aboriginal hunters near Vancouver Island, a U.S. Coast Guard official said Sunday.

Petty Officer Kelly Parker said five people, believed to be members of the Makah band based in Neah Bay in Washington State, killed the California grey whale on Saturday.

The Makah band has treaty rights to kill whales for traditional, sustenance purposes. However, the U.S. National Marine Fisheries Service (NMFS) said the use of a machine-gun may not qualify.

But one of the men suspected in the killing told a newspaper Sunday that he was "feeling kind of proud" and whaling is "in the blood." 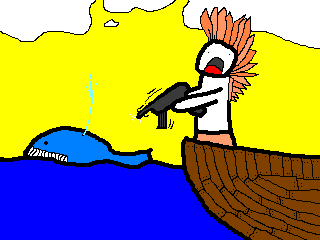 THE TERRIBLE WARCRY OF CHIEF EAGLETOOTH WHALEDICK A lot of people are up in arms about this story, saying it's cruel and unusual and senseless and wrong. I disagree, because even though I live in New England--indeed, grew up in Vermont, where the biggest exports are dairy and Deadheads--I'm no hippie. Case in point: a few Thanksgivings ago, my buddy Ben gave me a big bag of jerky for Thanksgiving. Only it wasn't your normal jerky. It was kudu jerky.

Kudu, of course, are a type of endangered African plains animal. Ben's crazy uncle Andy, the original Beverly Hillbilly, who lives in a trailer on thousands of acres of oil land, paid poachers to smuggle him one of these great majestic animals so he could hunt it on his land. After several hours of careful stalking, he overtook the beast, and slew it in the traditional Oklahoman fashion: by riddling it with bullets from the assault rifle he had mounted on top of his Escalade. He skinned it, butchered it, dried it, and sent a whole haunch express mail right to Ben's door. Believe me, there's nothing like sitting in class and listening to your Birkenstocked biology teacher yelling about the planet dying whilst you snack contentedly with the knowledge that you're actively aiding its demise. The irony sweeter than any meat.

But even so, I don't know why machine-gunning a whale engenders such a sense of native pride in our trigger-happy Tonto. It takes some skill, I imagine, to harpoon a whale, but mowing one down doesn't seem that difficult--just ask Biggie. I can't believe how many perks these Indians get though. Casinos, skywalks, and now this? If being an Indian means I get to hunt whale, I need to pick up some paint chips and have a powwow with Great Eagle to convince him to let me in on the fun. A luxurious life of liquor and largess will be mine to lead at last, and I won't even have to move to Appalachia. God bless government guilt.