The war on drugs, an all-out assault to shove anti-drug messages into children's entertainment, managed to infiltrate many, many parts of my childhood, and I assume many of yours as well. Even the Teenage Mutant Ninja Turtles arcade game at the mall intermittently displayed a big blue screen telling me that "winners don't use drugs." This confused the hell out of me, since I was drug-free and still managed to suck so much at the game. In fact, it wasn't until my first hit of meth that I was able to defeat Krang. I'm sure Nancy Reagan would be horrified by this statement if she didn't spend most of her life with a can of spraypaint in one hand and a paper bag in the other.

Even comic books weren't safe: In 1990, Radio Shack, the place where people used to buy rare batteries and where grandparents still buy terrible Christmas presents, decided to jump onto the anti-drugs bandwagon using the medium of comics. And if they could push a few of their products along the way, that was icing on the cake. Join me as we explore... 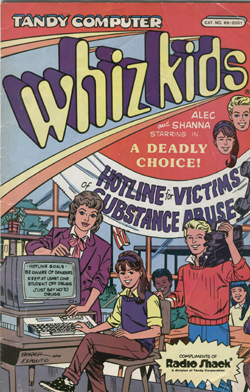 Not just whiz kids, but Tandy Computer whiz kids. Tandy was Radio Shack's own brand of crummy products, which they decided to push prominently throughout the adventures of Alec and Shanna (yes, the Alec and Shanna). Did you know that most Tandy computers are now used as female circumcision operating tables by third-world countries? It's true. But enough of Tandy.

A Deadly Choice! starts off with a scene in a shady-looking airport on a rainy night. A couple of cloaked figures unload a recently-landed plane with a shopping cart and deliver the goods to this guy: 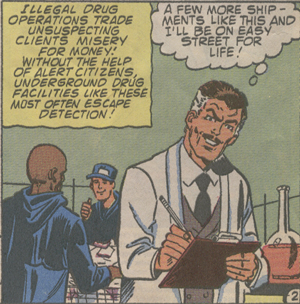 I bet you thought that meth labs were fly-by-night operations run by street trash in their basements. No, it turns out that distinguished collegiate-types with clean labcoats who look like a mix between Vincent Prince and Dr. Quest are the real poisoners of society!

In their safe little schoolhouse, as they tell their teacher what they did over summer vacation, Alec and Shanna know nothing of the controlled substances that the Dean of Drugs at Addiction University will soon get their classmates hooked on.

As you can see, Tommy and Bobby are the cool kids in the class, and they want nothing to do with Alec's never ending kiss-assery. Alec monopolizes everyone's time by going on and on about how they somehow let a 10 year-old like him work at a camp full of emotionally disturbed and drug-addicted children. Luckily, the school bell rings, saving everyone from hearing how Alec rescued yet another child from having a relapse with his "Let's ride bikes!" technique. On the way out of class, Alec and Shanna are disturbed that Tommy, a well-meaning redhead, started hanging out with Burnout Bobby over the summer. It turns out that Tommy and Bobby have quite a lot in common:

They've become pushers! Not to mention they both have quite a brilliant understanding of how the social ladder works. This drug pyramid scheme could be a gold mine! Unfortunately the inseparable Alec and Shanna have witnessed one of their transactions, and soon become potential customers. Luckily, Alec knows the right thing to say: 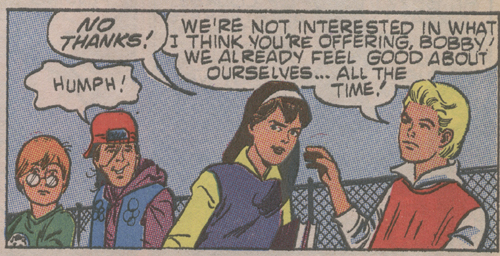 Note the hesitation in Alec as he tells Bobby and Tommy just how often he feels good. This is just a brief glimpse into his life of quiet desperation. He's lying to himself, and his awkward relationship with Shanna is proof of that. In reality, Alec doesn't give a crap about the war on drugs. He's just constantly trying to impress Shanna with his character. Poor Alec hasn't learned to put down the torch and move on, though; every second he spends with Shanna is an anguished, heart-wrenching moment of pure want. 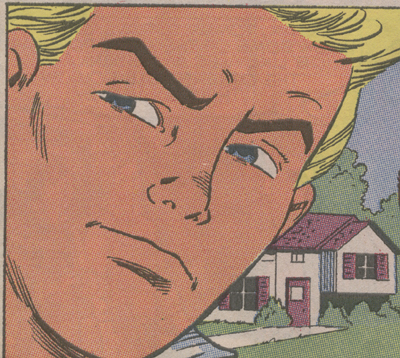