Meanwhile, Tommy, along with his ginger slave Bobby, were experiencing the scary street life of not owning a computer from Radio Shack. Not owning a computer has brought both of them face-to-face with a real-life social situation. Don't let this happen to you!

We now join Tommy and Bobby, already in progress. 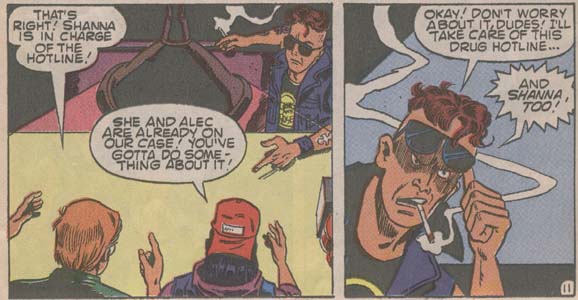 Buzz (possibly named for his unfortunate haircut) is worried about this new drug hotline of Shanna's, and he should be. His "takedown" may involve many phone pranks of Jerky Boys caliber. Perhaps he can convince Shanna that her refrigerator is running... All the way out into the street where she will be gunned down by armed thugs.

And as much as Tommy and Bobby are upset about Alec and Shanna's narcing, they need to know that there is such a thing as reverse-narcing. And they're guilty! 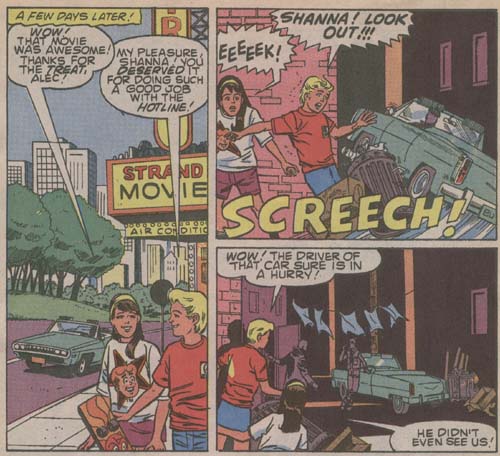 We join Alec and Shanna a few days later- Wait, according to the comic, it's "A few days later!" This exclamation is wasted on the disappointing end of another one of Alec's embarrassing "dates," which I imagine was chock full of sweaty and clammy "just friends" hand-holding and statements like "Heh, looks like I spilled some popcorn on the front of your sweater. No, no- I'll get that for you." You know that after Alec gets Shanna back to his house, he's going to make Triscuit pizzas and things are going to get weird again when he "accidentally" forgets to put his clothes back on when he comes back from using the bathroom (Alec has a lot of problems). He's tried it before. "Why," Alec will ask himself, "Why can't she love me like she loves her three other boyfriends?"

Before things can get too weird, a car veers off of the road and almost turns Shanna into a corpse that I assume Alec would do things to before he would call an ambulance! He'd at least cut off one of her fingers and make it into a necklace. I can't say the reckless driving is entirely unjustified, though; if I saw a kid wearing an Archie T-Shirt, I too would have the urge to turn this horrible creature into road pizza.

Astute readers should notice that Alec and Shanna just got out of Air Conditioning: The Movie.

Forgetting about missing this opportunity, Buzz meets up with the supplier of Dr. Drugs, and gets a shipment of his own. Luckily, Junior detectives Alec and Shanna are on the case! 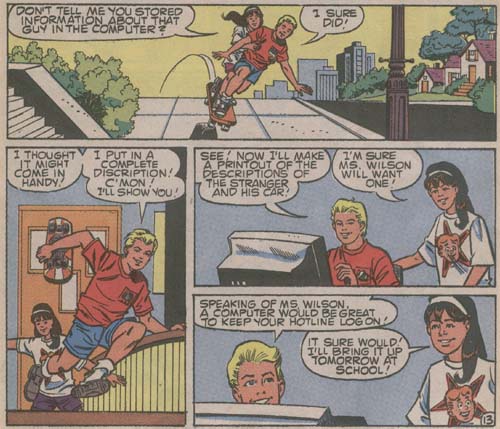 Oh Tandy, what can't you do? (Hint: survive in a world with far better products)

You know, it's really cute that a couple of pre-teen Archie fans are using their computer to monitor drug trafficking, but at some point shouldn't the real police be involved? I assume their computers have more than 64k of RAM and weren't made in a country that changes names every three months, usually when the newest dictator is assassinated.