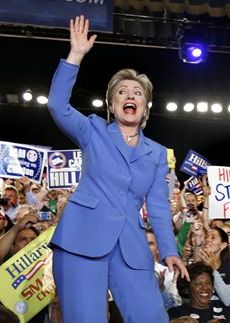 To steal an election, stand next to it and hit the triangle button.A special memo from campaign headquarters:

This kind of attitude is un-American and anti-democracy. It's just wrong to act like someone has been elected months before the party big-wigs have had their say in secret meetings involving the exchange of personal favors. I am sure that George Washington said that somewhere. Maybe. He was hard to understand with those dentures.

Anyway, we at campaign head quarters wanted to give an update about some of our upcoming strategies for victory to everyone working to get Hillary into the White House.

Possible plans for a Hillary win

1. Rob a bank while wearing an Obama mask.

Everyone knows that Barack Hussein Obama is an elitist Hawaiin who doesn't understand regular Americans (defined here as poor white people), but did you know that he ROBS BANKS? Well, he doesn't, but after the Hillster knocks over a few while carefully disguised in a plastic 99 cent Obama mask, CNN won't be talking about anything else for weeks.

2. Have Chelsea date a black dude.

Chelsea has already shown herself willing to go on dates with superdelegates, but it's time for her to really step it up and date a black guy. Maybe lots of them. Have someone interview a few clean cut ones.

Oh, and make sure none of them have ever worked for a paper, even a high school paper. I don't have to remind you that if Chelsea comes within eight feet of a journalist she will turn into a troll because of that gypsy curse that was put on Bill a year before she was born. Last time that happened we had to spend three days cleaning up the mess, and also spent a fortune paying off the family of that guy she squashed, so don't let it happen on your watch!

3. Reveal that Bill Clinton really was the first black president

It's time to bring out the trump card we've been hiding for just this moment (a week after everyone thinks we've already lost and have moved on): Bill Clinton really was the first black president. Yes, we know people say that as a joke, but we mean literally.

The world will be shocked by childhood photos of a swarthy, afroed Billy, and by his tearful recollection of the disease that sapped his pigment and left him with no choice but to pursue a career in politics free of prejudice but still with a certain black hipness that gave him an edge against whitey. Once we've destroyed Obama's "first black" gimmick, he will be helpless and we can rush in to fill the gap with our "first woman" gimmick.

That reminds me, have someone go over the medical records of previous presidents for any suspicious surgeries or hormone treatments. We don't want to be surprised on this one.

4. Decide the nomination with a bowling game

On the off-chance the Hillanator loses, remember the standard procedure: "We expected to lose the bowling game. The bowling game isn't important. The real tie breaker should be a ping-pong match."