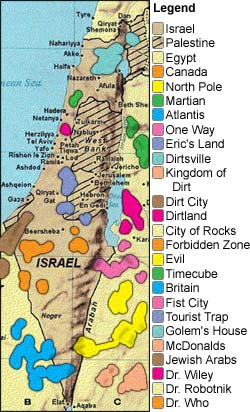 A current political map of the Middle East. I think.

Although I have held many different jobs in my life, developed infections in new and exciting places, and have taken a wide range of mind-altering prescription drugs, one thing has remained a constant throughout my dynamic existence on this planet (Earth): my undying belief that Israel and Palestine will reach a peace treaty and cease fighting. The first question that enters my mind each morning I wake up is, "I wonder how that peace thing is going in the Middle East?" Then I ask myself, "why am I outgrowing all my pants?" because I swear that the day after I buy a pair of pants my gut doubles in size and before you know it there's a button being launched out of my crotch at Mach 3 speeds. While I do have an answer regarding my upgrade in obesity, I'm afraid I don't have the same answers for that whole Middle East thing.

For those of you who have never heard of the Middle East before or don't know what's going on there, allow me the chance to summarize: you're stupid. Watch CNN or read a newspaper sometime you jerks. Basically you've got the Palestinians who want this big chunk of desert wasteland but they can't have it because the Israelis want the same wad of dirt and rocks. The Arabs and Jews have been fighting for this land since roughly 1,000,000 BC, back when "suicide rockers" would walk into a crowd of cavemen gathering by a big dirt pile, proceed to rub two sticks together, and eventually form a crude bonfire. The fire would then consume the suicide rocker who would attempt to light as many others on fire as possible while throwing a handful of rocks and gravel in random directions. This hardly ever worked because the guy on fire would be too preoccupied with extinguishing his flames to hurl stones or light others on fire. To make matters even worse, the phrase "stop, drop, and roll" hadn't been invented at that time, so the suicide rocker would invariably die. This was before the invention of religion, so nobody is exactly sure why they did this. Scientists are guessing it had something to do with The Big Bang theory, but they kind of blame everything on that.

Anyway, soon after 1,000,000 BC, the year 1947 AD took place. The Middle East was full of migrant Jews who had fled from Hitler and his army of evil mechanical robot Moon zombies. The Palestinians were naturally a little pissed off because they had been living there for a while and had all their stuff like unpacked and set up and everything. Then all these Jews came down and started hogging up all the space like when your college roommate brings over his idiot friends and their drunk braindead girlfriends to your dorm room. However, unlike you and your college buddies, Israel and Palestine have a bunch of missiles, bombs, helicopters, tanks, and soldiers, and can therefore do a little bit more damage than putting some shaving cream on your roommate's hand and then putting his other hand in a bucket of water and calling his parents, pretending to be a doctor claiming that their son just died in a drunk driving accident. The UN, US, and UPS have all tried to resolve this conflict by holding meetings and shaking hands while various news stations film them, but this strategy hasn't worked so far. The Jews have tried to solve the problem by killing the Arabs, and the Arabs attempted to resolve it by killing Jews. This solution has failed as well because whenever any side starts to win and really begins kicking the shit out of the other one, the UN begins complaining and demands that they go back to killing each other in equal amounts.

While Israel has a strong military and air force, Palestine has a bunch of crazy people who aren't afraid to explode in public places. It's kind of like in those realtime strategy games where one side has the strong but slow guys and the other side has the fast but weak ones. America tends to lean heavily towards the Jewish side of things because if we don't pretend like we really want the Jews to win they will use their secret Jewish world-domination power to shut down all of Earth and then we'll be closed until the next holiday season. So the entire world pretty much doesn't care if Israel and Palestine fight every day, just as long as the frag count for each side doesn't become too lopsided or uneven.

However, there's hope! A breath of fresh air is has been pumped into the lungs of the Middle East, as Israel has devised the most cunning and ingenious plan ever to ensure peace between both nations: build a big fucking wall.

Palestinian Authority President Yasser Arafat has blasted Israel's decision to begin construction of a 217-mile (350-kilometer) fence designed to shield the country from suicide bombers, calling it a fascist enterprise. "This is a fascist, apartheid measure being done, and we do not accept it," the Jerusalem daily Ha'aretz quoted Arafat as saying. "We will continue rejecting it by all means." 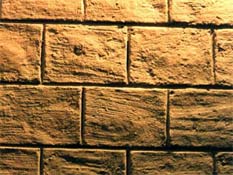 A wall. NOTE: not to scale.

It's this kind of clever thinking that has brought all of mankind to the place we are today, although I'm not exactly sure where that is. You've got to give the Israeli leaders credit though; the revolutionary idea of "a wall" probably ranks up there with the invention of the lightbulb and the carp-shaped tie. Just think about it: a wall separates one group of people on one side of the wall from another group of people (on the opposite side). There's no possible way violence could break out if there was a big fucking wall in the Middle East! Palestinian suicide bombers would have to devise some pretty clever schemes to sneak by this secure obstacle. I'd imagine their first attempt would go something like this:

Then ka-blammo, another cafe explodes in a shower of Palestinian body parts. If the Israelis ever catch on to this Palestinian trick, I'm fairly sure the Arabs could think of new ways to fool them, such as claiming they're pizza delivery guys or they've got to hurry up and open the door because all of the land on the Palestinian side has turned into gold or chocolate and if they don't open the door then the guards will never get any. So as you can see, this wall idea is really wonderful and all, but it's not 100% secure. This is why I propose the leaders in Israel take this concept a few steps further to ensure the safety of their citizens, preferably by implementing any or all of the following ideas: 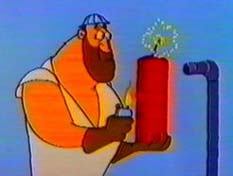 Israel must make sure the Stealth Construction Workers are not easily fooled by puerile ruses!

A big sign on the Palestinian side of the wall that reads "GO AWAY" in many different languages, preferably Arabic as well.

A wall-building robot which can be unleashed into the streets of Palestine, erecting walls in random locations and eventually walling itself in so nobody can get to it and turn it off. It would be like a cross between Robocop and that faggy thing from "Short Circuit," The Jackson 5 or whatever it was called.

Planes that drop a load of walls around Yasser Arafat's compound which he is never in because he's always partying the night away in some Arab bowling lane. I'm not sure why Arafat never hangs out in his compound, except for maybe the fact that Israeli bulldozers are always running into it, pushing dirt into his front yard, and knocking over his mailbox.

A second wall behind the first wall. Hell, make a third wall behind that one as well. Make all of Israel into a series of horizontal walls and rename the country to "Wall Land." Charge admission for people to enter and then laugh as they get lost behind wall #2819.

Land mines that, when stepped on, make a wall spring up and enclose the victim in a plaster deathtrap.

Hire those light bikes from "Tron" that had walls grow behind them wherever they go. Then unleash the blue and red bikes on opposite sides of Palestine, turning their precious Holy Land into a series of neon rectangles.

As I proved above, there's a lot of different ways Israel can work on the imperfect idea of "one big wall," and hopefully turn it into the much more perfect idea of "a whole lot of big walls." This will undoubtedly solve the silly religious problems between the Arabs and Jews because there's nothing that building a good wall can't fix unless the problem is having too many good walls, and I don't think I've ever heard either side complain about that. Yet.

Once again Zack "Kite Elevator" Parsons has put his face to the grindstone and written up another review of a naughty game from Japan. In Japan "naughty" means boring and offensive.

It's a lesbian wrestling sex simulation! Yes, somehow they have combined all of those genres into something that is actually bad. Check out his review!