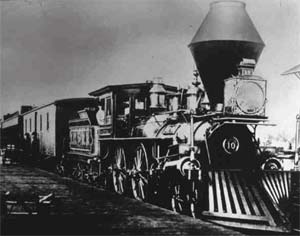 Trains sure are warm and inviting!Over the last three years I have taken advantage of a service known as "public transportation" to move my person from the vast cornfield utopia that is Indiana to the bustling port city that is Chicago. The main reason I do this is because my school is there and it makes it a lot easier to get high-ranking grades and pass classes if I am there as well. Since Chicago is a seething pesthole filled with sleazy characters straight out of the cantina scene in Star Wars, I choose to remain a resident of Indiana where trees still grow in the actual ground instead of stone buckets and squares cut in the sidewalks. Ultimately this works out to my advantage because it's safer and somewhat more pleasant than driving into the city, even if I do have a luxurious Ford Tempo on my side. Like all major cities, Chicago is filled with millions of foreigners who have come to strike it rich in the lucrative field of taxi driving. To make matters worse, the city only requires that you know where the horn is in order to get a driver's license and chauffeur's permit. Few drivers know how to do anything but hit the gas and than honk like hell when something gets in front of them. Forget about breaking, as a well-placed honk will eliminate all need to stop. Then of course if I did drive in, I'd have to pay up to twenty-esque dollars just so I can park my car in a place where it wouldn't get towed or end up with a naked homeless man having night terrors in the backseat. Instead of all those hassles I can just ride the rails hobo-style to the city and be done with it.

Sadly, riding the rails isn't without its faults. Sure, trains can occasionally be fun and relaxing, but more often than not they're a moving headache. The problems typically arise when people fail to recognize that a train is essentially a series of really long cars that travel not on roads, but on train tracks. The usage of train tracks confuses people, as they instantly assume that the train is a thrilling roller coaster and thusly they have the right to scream loudly and move around like idiots. Such nuisances are all too common. There are always the parents who get on and drag along an armada of noisy and undomesticated children. As a firm believer that children should be kept in cages until it can be proven that they are incapable of expressing emotions, I find this to be a major pain in my thong district. Instead of being able to relax on my ride, I often have to endure children running up and down the train car, screaming, laughing, and flailing arms madly. Children are annoying enough, but some of the adults can be even worse. There is nothing more infuriating than sitting near a herd of loud-mouthed cretins excreting lame conversation shrill enough that your eardrums erupt blood from having to work so hard deciphering their particular brand of moron spiel. Unfortunately, these are the common pains of public transportation. Short of becoming a dashing railroad baron and setting up my own private railway, there isn't anything I can do to remove those vexing commuters. But that doesn't mean I can't engage in an epic game of wits with them!

Every great annoyance of public transportation must have a solution, right? I strongly believe so. I have seen just about every annoying problem you can think of, so you can invest stock in my judgment. After careful thought and some sexy diagrams, I have come up with solutions to some of the most common problems encountered with commuting via train. For those of you who ride the rails, feel free to take notes. Those notes just might come in quite handy in your various times of public transportation need. Believe you me, these are practical solutions:

Overcrowded Train
Problem Description: It is quite common for a train to take on a larger capacity of people than it was designed to hold. This leads to people standing in the aisles and/or vestibules and a general air of discomfort. This also means that you are going to have to share a seat with someone instead of being able to enjoy more space for yourself. That extra seat next to you provides an added buffer separating you from the savages. You need that extra seat!

Problem Solution: Bring along a pair of underwear. It doesn't matter if it's a clean pair, but ideally for your sake it should be. Using bottled water or some other easily containerized liquid, lightly wet the underwear. Now place the pseudo-soiled undergarment in the seat next to you and pretend like you don't notice. There are few people who are going to want to move wet underwear just to sit down, and fewer who would want to sit in a seat previously occupied by wet underwear. Congratulations traveler, you just earned yourself an extra seat! 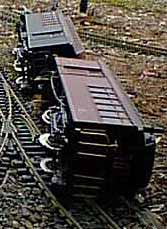 Gruesome train wrecks like this are very rare these days.

Obnoxious Commuters
Problem Description: Your relaxation is held captive by a hoard of commuters talking at loud levels about whatever horrible nonsense amazes them. Often times these pests can be halfway across the train, but the sound of there voices still reaches you. Your journey would be a lot more pleasant if they were rendered unable to talk.

Problem Solution: Short of murder or acts of extreme violence, the only way to silence these infidels is to convince them it is in their best interest to shut up. Threatening them sounds like your best weapon. A confusing or startling threat directed at them should work to disable their auditory emitters. Try one of the following statements:

"God has commanded me to part this conversational sea of stupidity with my aluminum alloy knuckles!"

"Conductor Fist says the next stop is your face! Choo! Choo!"

"You remind me of the person who is now encased in drywall in my basement! I think his name was Ted. Are you related?"

"I'm from ten minutes in the future, and in my time you're dead from mouth-exhaustion!"

"I'm the railway marshal and I'm here to take you to my sex jail!"

Slowpoke Door Jams
Problem Description: Getting off the train is hindered by a bottleneck directly outside of the train doors. This commonly happens when a large family gets off the train and rather than moving away from the train, instantly stops to establish a beachhead. They fortify this position by unpacking strollers, lining their children up into wall-like formations, and placing their bags in strategic positions aimed at preventing other travelers from exiting. And they do all of this unintentionally. It sure would be nice if you could break through their defenses.

Problem Solution: Identify the weaknesses in their fortress. More than likely it's the children. Your best bet is to take them by surprise and rush. Children are natural cowards, so they will scurry out of the way at the first sign of danger. Once you break through, complete the destruction by disabling the parents. Do not harm the children, as it's dishonorable to deny them the chance to grow up and avenge the untimely downfall of their parents. You'll just have to live with them as enemies.

Of course I'm afraid of people, so I haven't actually tested any of these solutions. I strongly encourage you to do so, though! I can't guarantee these will actually solve anything, but I can guarantee that they will make the ride more interesting. That at least counts for something.

Jupiters! Our very own Helen Gunther is back with another edition of her weekly advice columns. As predicted by the stars, it's full of sound advice you can take to the bank and deposit as if it was money or bricks of solid gold you personally stole from the King of Prussia. Here is just one of the many questions Helen tackles:

Hi. I was wondering if you could help me out with...ya know...girls. There is this girl I really wanna shag, but I'm scared to ask her. She's one of my good friends that I've come to like more than a friend. How do I ask her?

Thanks. Post-friendly in Cleveland.

What's that? You want to read the column? Go for it!