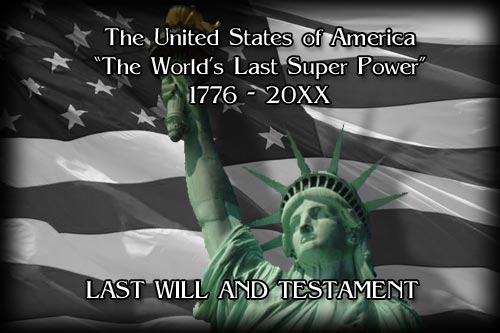 If you are reading this then it must mean I am dead. I can only hope that this will and testament is being executed after a long and illustrious career as a great nation. I have surely made a lot of mistakes along the way, but I’ve always liked to think that my heart was in the right place.

Whatever end befell me, I hope that you can look back on my lifetime as the world leader as a period of unparalleled progress and liberty. If I was blown up somehow, well, that’s how these things can go. I just hope that the rest of the world is doing okay and that the Communists aren’t in charge.

I’ve had a lot of great leaders, so instead of remembering the rotten ones try to remember guys like George Washington, Abe Lincoln and the last good guy I had as a President. Try to remember the good wars where we kicked ass for freedom instead of all those creepy South American CIA wars. Picture in your mind’s eye the Rocky Mountains at sunset andNew York Cityafter Guliani put all the homeless on a barge and sunk it in theHudson, but before 9/11. Don’t picture a superfund site inNew Jerseywith an eight-legged deer skeleton melting into toxic waste.

The properties dispensed in this document are only considered valid if they were in my possession at the time of death. IfChinaor some multinational operating out of theBahamashas them all then I’m sorry.

Enough calories for a week and twice the anus-searing heat of a curry!To my dear friendEngland I leave all of my giant burritos and/or burritos as large as a human head. You have been my friend since the beginning, excepting a couple of wars there during my rebellious youth, and I have been happy to kick ass for freedom around the world with the Union Jack next to the Stars and Stripes. With me out of the picture it’s up to you to become the world’s fattest nation. I know you’ve got Indian food, but over here the giant burrito is my third world food of choice. You won’t believe the size of these things and they come with extra cheese and sour cream. They’re delicious!

To my oldest friend, France, I leaveHollywood. I know you’ve been envying it since about 1910 and it kills you that I’ve been the world’s purveyor of culture. May you useHollywoodto make a hundred million dollar black and white movie about a gay love triangle. Imagine how many computer generated orcs Kieslowski could have put in the Three Colors trilogy with that sort of cash.

ToCanada, so close and yet so far away, I leave all of my stockpiles of medical marijuana. I grew some really top shelf sticky icky, but I could never quite let the terminal cancer patients have any for fear that devil weed would fuel a crime spree. I also leave you all of my Sun Chips and Funions. Do with them as you must.

To my hombreMexico I bequeathAmerica’s favorite bread-wrapped meat; the corn dog. Reverse engineer its wooden stick technology and create a bright tomorrow of delicious chicken tacos…on sticks. I also leave youTexas. You won at theAlamoso I don’t remember how I ended up with it, but I’m willing to bet it involves mescal.

To the tribes indigenous toNorth America I leave all of my blankets, comforters and bedding. I promise that there is nothing weird with it and it’s perfectly harmless. In fact, it’s mostly high thread count Egyptian cotton. 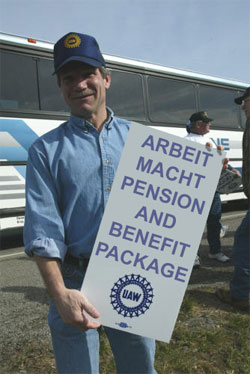 Seeking a final solution to the contract arbitration question.ToGermany, the friend I love to hate, I leave a fantastic gift with a poisonous sting. I entrust you with the American automotive industry, rich in history and monolithically vast. But along with this bounty comes the entire workforce with their bloated pensions, to be paid out until the day they die.Hey, maybe you can figure out an efficient way to kill off millions of people you view as money-grubbing interlopers.

ToAustria I leave all ofAmerica’s barbecues and shrimp boats as an apology for all of the idiots that think you areAustralia. Red, white, red, until the gnarley sheila is dead!

ToAustralia I leave my entire arsenal of ICBMs. I think you have been out of circulation on the nuclear targets list for way too long. Now don’t get pissed off at me, it’s not all bad. Next time one of your citizens gets caught with five kilos of cocaine up her ass by Balinese customs you can threaten to turn Denpasar into a glass-rimmed crater.

ToRussia, I know we’ve almost never seen eye-to-eye, but I’m giving youAlaska. I’m doing it mostly to fuck withCanada’s head, but I’m sure you can transform its millions of acres of pristine wilderness into one of those grim industrial hells you seem to fancy.

ToNorway I say that I support your arts and I hereby bequeath all of my mega churches. May their burning inspire a thousand songs about frosted skulls and dire goblyns.

To theNetherlands, with the world’s highest percentage of atheists, I leaveAmerica’s Baptists. It’s called Schadenfreude. 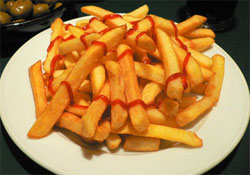 Ceci n'est pas une pommes frites!ToBelgium, secret master of the french-fry, I donate all of my ketchup and ketchup manufacturers. All of those sissy European sauces and toppings are just pure silliness, and you’ll realize that once you have some good old down home ketchup. Mayonnaise? Don’t make me puke upFlorida.

To Cuba, my wee nemesis to the South, I leave all of the Walt Disney parks. I hope they can make up for all of that tourism money you've missed out on since the revolution. I'm sure Walt Disney won't mind, just stick his frozen head in a giant mojito.

To troublesome Iraq I leave one million copies of Robert Persig's Zen and the Art of Motorcycle Maintenance. I've never actually read it, but when I was going to Florida State I'd hang out in the student union holding the book. Freshmen psych majors would stop and chat thinking I was a pretty chilled out country and then I would get them drunk and have ass sex with them. I'm pretty sure a lot more ass sex is what Iraq needs to heal the wounds of strife.

To that special lady Burkina Faso I leave NASA and all its assets. You will always be Upper Volta to me - the most sensual of the Voltas - and I have long cherished those nights we spent together. We held each other beneath the night sky and watched meteors burn across the starry heavens. Now you can launch rockets there to rekindle our love.

To the Moon, most exotic of all my lovers, I bequeath the coastal oceans of North America. Their gentle carress against my shores reminds me of the tender way we once loved in that cold beyond of space. The way we touched, so gentle and fleeting, the way you took my lander into your tranquil seas. I wil never get you out of my head. I can only hope that you and Burkina Faso can become friends.

To Iran, whom I have never understood, I leave all of my M.C. Escher posters and puzzle books. I hope they screw with your head like you have always screwed with mine.

To Israel I leave New York City and Brooklyn. You're a great hunk of land, but maybe think about urging your people to go ahead and move to these two inheritances. Nobody really seems to get along with you where you are now.

To each of the nations of South America I leave two things: my sincerest apologies and the CIA bases I used to overthrow your leftist governments in the latter half of the 20th century. I wish I could tell you where they are, but there are just so many I can't quite remember them all. I think Nicaragua's CIA base was inside a hollowed-out tree with a suspicious radio transmitter sitcking out of the top.

To Taiwan, one-time junk basket of the United States, I leave all of my airplanes and helicopters. Those decades of filling my vending machines and dollar stores with crap eventually paid off and turned you into a first world country. Let's face it, though: one of these days China is going to get sick of you lording your standard of living over them and it's going to invade. Fly all of those airplanes and helicopters to Japan and ask really nicely if you can stay.

To inscrutable Japan I leave the Hank Williams Junior and Senior discographies. I was going to give you the Enola Gay for a museum or something, but I still don't really trust you so I'm just going to throw it in with the other crap I gave Taiwan.

South Korea, buddy, I tried but those damn Chinese had to interfere. I hope eventually you can get your top half back and live in harmony. Until that day comes I'm leaving you Best Buy. You pretty much fill it up in the first place, so I figure I'll save you the time and you can just drive the trucks straight from the Samsung factories to the Best Buy stores.

Finally, to China, I leave this warning: I know you did this to me. I can't prove anything, because I'm dead, but friends and family should definitely investigate the possibility that I was murdered. Assuming you did murder me - and I am assuming that - I am going to haunt the shit out of that Forbidden City of yours. Everyone is going to be like, "Hey, what is that cold wind?" and you're just going to have to shake your head and say, "Freakin' America again."

I know a lot of you countries out there are probably feeling a little hurt right about now, wondering why your name didn't show up in my will. I admit, I was getting a little stressed out at the end there, so I might have forgotten a few of you, but most of you I didn't leave anything because I gave you everything I could during my lifetime.

Except for the African countries. You guys, well, sorry. You're pretty much screwed forever, so there's no point leaving you anything cool that might make you think you have a chance.

Anyway, good luck, world. I hope you guys build a cool statue to me or something. Make it out of something that kids can't deface. Maybe the world's first electrified statue.

Try to keep things under control.