Wading through my e-mail the past day or so I have discovered a lot of the usual "you suck" and "u r mean asshole" e-mails replaced with "you suck, update SA u r mean asshole". In a shocking turn of events, the front page of Something Awful has not been updated since Friday of last week. Considering Something Awful, CNN, and Luanne's Quilting Korner are the only three web sites on the interweb that update with any regularity, this came as quite a surprise and disappointment to a number of our readers. We here at SA would like to apologize and offer our solemn promise that this dreadful oversight will not be repeated in the next 12 hours.

Let's Clean Up the Streets America!

The United States is probably not the filthiest country on the earth, but I live in the United States and I can honestly say this country is extremely dirty and unsafe. I'm not talking huge piles of HIV infected hypodermic needles or mounds of rotting human corpses, it's just that most urban areas seem to be covered with some sort of grime. It's kind of like that sludge that accumulates in gutters during winter time, a mixture of snow, car exhaust and used condoms. This country is also dangerous. Crime is rampant in the streets and the crime is not the kind that is semi-enjoyable like illegal drugs or prostitution, it's the kind like "man leaps out of tree and bites your face" or "coked-out truck driver runs over your entire immediate family, staggers out of his overturned vehicle and shoots an infant with a revolver."

In the past decade some cities have taken steps to reduce crime and urban decay. Ironically, New York City, once the biggest festering pit of corruption and crime in the United States, has largely turned itself around. Problems remain in the Big Apple though and with this in mind I propose taking some of the measures of mayor, adulterer and cancer recipient Rudolph Giuliani a step further. We need to clean up the streets America, and I guess it falls to me to put together the game plan! 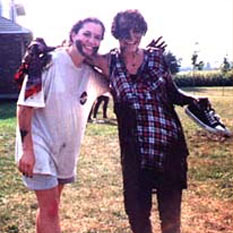 Don't let the fake smiles fool you, these women are miserable being dirty.The French may be known as the filthiest people on earth, but we Americans have our share of dirt beneath our fingernails. Sometimes it's excusable. If you just got done mudwrestling or shucking hogs or whatever you do on a hog farm you don't have to look and smell like you're ready for tea with the queen, but some common sense would be nice. I would like to enforce the following personal hygiene guidelines at all times throughout the continental United States.By not following these guidelines you risk both embarrassment and the gradual deterioration of your health. If I get my way in congress you will also risk summary execution at the hands of my roving "purification" teams.

The street pictured above is a major throughway in Downtown Detroit.Sure those big sweeper brushes will take care of stuff like empty beer cans and discarded print outs of "Sabrina: The Teenage Witch" erotic fan fiction, but what about the small stuff? Every day street sweepers are missing thousands of Pokemon pogs, rusty coins from the turn of the century, and soiled novelty diapers for very small pets, not to mention hundreds of other assorted items. Something drastic needs to be done to clean up the streets of our fair cities! For ideas I turned to the best damn soap legally available on the market: Lava Soap. No, I'm not proposing anything as ridiculous as spraying lava soap on our streets all the time. That would require incredible resources that frankly most city governments couldn't afford.

Instead I am suggesting a far simpler and more ingenious plan. You see, there is a vast untapped reservoir of "nature's cleaner" just below our feet; magma. Each city could simply drill through the earth's crust and into the trillions of gallons of rich and creamy lava hidden in the mantle. Then on a pre-scheduled day all city streets could be flooded with a thin layer of lava. Nearly white hot, the lava would immolate any unwanted trash it touched, up to and including the aforementioned coins, pogs and diapers in addition to the paper garbage, trash bags, parked cars and stray cats that a normal street sweeper cleans up. As an added bonus, the lava would simultaneously pave roads and sidewalks when it hardens into a glassy smooth surface of igneous rock. Now that's class!

Phase Three: Take a Bite Out of Crime 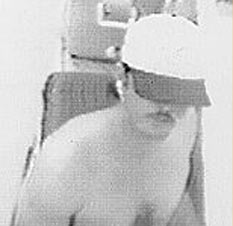 Caught on security camera during an armed robbery, notice that the man is not wearing a shirt nor one of the suggested fancy hats.The final, and perhaps most difficult, problem that needs to be tackled is the overwhelming crime frenzy here in America. There's no denying that violent crime is greatly increased when guns are so readily available to criminals, but stopping the flow of guns to the bad guys who shoot nuns would cut off the flow of guns to the not quite as bad guys who shoot their neighbor's cat. The United States has always been and will always be a country in love with guns. Unless a medical study comes out and proves that guns cause people to die from cancer in addition to causing people to die from bullets entering parts of their body. I knew early on that tackling the prevalence of firearms would not be the way to take care of the crime problem.

Robotic Kill-droids were an early favorite with me, but Kill-droid technology is still untested and fairly controversial. The last thing I would want would be convincing congress to spend billions on these Kill-droids and then having them turn out to be lazy pacifists. How would 50 Hug-droids driving around your city on tank treads help to put an end to violent crime? It wouldn't, of course, so I had to explore other options.

Unwilling to completely abandon my robotic fantasies I chanced upon an article in my local newspaper about stem cell research. Apparently these stem cells can only be taken from aborted fetuses. What about the rest of the fetus? State-of-the-art cyborg reconstructive technology puts mechanical resurrection well within our grasp. I could think of no better candidates to use this technology on than the potential felons who were terminated before their crime spree could even begin by pragmatic doctors. What's better is if the cyborg-cop fetus craze really took hold it might convince women considering abortion to go ahead and donate their unborn criminal children. They would have been dangerous detriments to society had they been allowed to live, but in their undead state they can serve the greater good of justice. Who can argue with that rock-solid logic?

Soon, if all goes according to plan, the streets of your city will run weekly with hissing streams of molten rock, while flocks of the fetus-cops patrol overhead. Buoyed by hoverjets, their lifeless black eyes scanning the clean-faced citizens bellow for any signs of deviance. The white-frocked purification squads roving on foot, moving from household to household to make sure every citizen is adhering to cleanliness edicts. That, my friends, is truly a vision of utopia. Feel free to e-mail me your thanks in advance, every kind letter means a lot to me and helps provide moral support in my upcoming difficult struggle to get this legislature passed through congress.

Only two days behind schedule and we are introducing a new issue of the award-winning Fireman Comics. The comic has been up on the Fireman Comics site for a couple days now, but we are notoriously lazy here at Something Awful so we're just now getting around to debuting this fine issue.

Oh my, something is a bit different this time around! After reading the Fireman Comics site I discovered that this issue is, in fact, four separate short strips. That crazy Fireman!