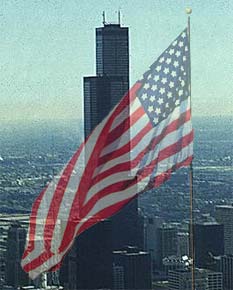 Never forget! God may forgive you, but Phinneas J. Tolerance will take a long time to forgive you.Welcome to another exciting and educational broadcast of "The Straight Truth Show", I'm your host Phinneas J. Tolerance. Thanks for tuning in, and if you're reading this show on the computer then thanks for dialing up its digits! In an amazing joint venture between the magical healing powers of 1480 WRRR "The Whir!" and the computer site belonging to Rick Kanyasa called "Someone Awesome", I am coming to you live on two different stations. I'm really not sure how this works exactly, but if I know Rick then prayer is involved somewhere, because dealing with the red devil of solid-state technology is a dangerous process.

This may be my last broadcast gentle listeners, the last time you hear my soothing words and sage advice drifting out of your radio consoles like a summer zephyr. It is the End Times and I don't know how much longer it will be until Jesus comes to me and asks me to take his hand and float up to him in his invisible Christ helicopter into the kingdom of Heaven. The helicopter is invisible, not the Lord. For Biblicological scholars such as me the writing on the wall has been clear for a long time; ever since that baked bean fiasco in Sand City, Utah, out behind the shed. Sand City, Utah. I can't talk about the specifics of that incident, but all the way back in the sinful summer of 1967 I knew plain as I know my name that the world had bought a one way ticket on the calamity rollercoaster.

I read newspapers sometimes and I know that everyone has got their suspenders in a twist about this Ben Lauden fella. He has a sporty beard that the Latinos like to call "Charisma" and he is quick with the words and the ladies, no doubt, that's how those Spanish men are. Good old Uncle Sam and his prodigal son George W. Bush II have singled out this smooth-operator as being behind the bombing of the Sears Tower that took so many innocent lives into the bountiful pastures of the afterlife. I know you all are feeling sad right now because you lost a loved one or maybe a pet or maybe both, but just remember that all those poor folks who met their untimely end are now enjoying the love of God in his castle in the sky. God's kisses feel like rose petals on your belly!

I think this Ben Lauden character is definitely the devil. I think I can prove it to you beyond a shadow of a doubt because I have observed him like a hunter and know how he moves and acts. Then I've got this great guide book about the Devil called "The Bible", you may have heard of it, I sure hope so.

Before I get into all that I have to take a brief commercial break folks, I apologize but this is how we have to do things here at 1480 WRRR, "The Whir!". Do you find it hard to buy clothes that fit you right? Are you too tall or portly to slip comfortably into the latest fashions available at Wal-Mart? Well Honest Don's Handsome Gent Clothiers has the solution to your problems. We've got slacks that will fit a whale on painter's stilts and they are stylish to boot. You can find us at exit 43 next to Delicious Don's Seafood Buffet, where all the crabs are deep fried! Bring the kids for a free trip to the sundae bucket! 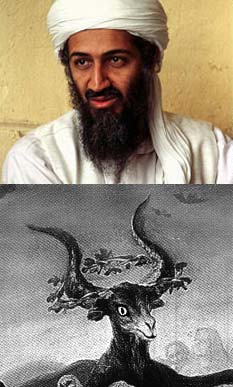 BAM!! Am I seeing double?! The resemblance is uncanny!Welcome back to the show and thanks again for tuning in to hear the Straight Truth Show. If you're just joining me, I'm Phinneas J. Tolerance and I'm your host and we are discussing Omar Ben Lauden, the terrorist who has attacked America. Frequent listeners to my informative program may know that I have a lot of knowledge about the Bible tucked away in my old jar head. I went down the steps into this vast unfurnished basement of knowledge and looked for verses in my King George Richard III Edition of the Bible that described the devil in all his many forms. Then I compared these things to this modern day villain and home-wrecking lothario to prove beyond a shadow of a doubt that he is actually Satan, come to earth for the End Times.

On page 49 of the Bible it says "And the Lord did cast Satan out of the splendorous gardens of paradise and Satan was sullen. His beard was made in the bronze of the moon city and his handsome features were downcast." We all know Ben Lauden has a beard and I don't know what kind of bronze the moon city is selling, but if it's anything like normal bronze than that description is spot on.

On page 233 of the Bible, God wrote "When the betrayer Satan led his legions across the salted plains they rode on the backs of terrifying beasts. Some rode upon the loathsome forms of great ocean-going Leviathans, impervious to the slings and arrows of Roger and his tribesmen. Others traveled on scorpions that shot blasts of fire from their clacking maws, and Satan himself rode upon a dread palanquin, lashed to the back of a mammoth that could fly." God spelled it out plain as day there, because Omar rides on the backs of jet planes that shoot missiles out of their jet eyes. Could it be any more obvious? If you still doubt, allow me to continue.

On page 700 of the Bible, about halfway down, where it's talking about Satan taking a bath, God said "Satan was very naked within the water, but even in his unclothed state he did not dislodge the fancy hat from his head. He wore this malodorous headdress to signify his power and the large diadem placed in the center would blink three times before Satan would use his arcane powers of evil to teleport around and then unleash a flurry of attacks." Who else could it be? Have you seen that garish hat that Omar Ben Lauden wears? It's like if you dipped an evil pope hat into a bucket of gold and then threw all the rubies at it that would stick.

Now in this time of terror on our own hallowed soil of the great US of A, we have to stand united and not back down from Satan and his scorpion riding legions. God will show us the way into heaven and if we die fighting this great evil we will be guaranteed a spot at his side, he may even take us to dinner and dinner in heaven beats the consarned heck out of dinner at Delicious Don's Seafood Buffet. And that's saying something people!

To bind us together like patriotic glue I have taken my love for my country and my love for God and I have written a poem. I like to call it "God Bless Us USA".

Bombs can try and blow us up,
But America will just get back up,
And when we do we'll be mad,
And Satan won't be very glad,
To see us standing together,
Outside no matter what the weather,
Shooting machineguns at his army,
Because that Spaniard Ben Lauden is very Smarmy.

If that lady I stare at ever loves me,
Or that kid who sells me coffee ever shoves me,
I will fight,
For what is right,
Because I am American and God Bless America,
Until the cows come home on us.

I think it is time to say goodbye to you fine folks out there in radioland, and to you as well in computerland, because the Sation Manager's face is all red. I think it means his head is about to explode, which would be nice because I would not put him on my "good guys" list. He's not a demon or anything - but, never mind, the sound guy is pushing the button.