Today Rich sent me a link to an article in the San Jose Mercury News about a man named Frank Chu who walks back and forth on the streets of San Francisco. He carries a sign that warns about a conspiracy which involves Bill Clinton, a number of galaxies, aliens, and Frank Chu's failed career as an incredibly exotic movie star. Recently the owner of a local sub shop decided to pay Chu... to let him use the back of his sign as a roving billboard for his sandwiches. You can read the whole thing here.

Asked if he knows what he's getting for his $25 a week, and whether he tells Chu where to walk, Eggert said: ``I wouldn't dare dictate to him where he goes. He goes and protests where he feels like it. He knows the ebbs and flows of the crowd, and where the foot traffic is, probably better than any consultant I could hire.''

With the economy what it is these days, almost anything like this gets my entrepreneurial motor running. Even in Ohio there are hundreds of sign-toting crazy people walking around in our cities, incessantly ranting and raving about alien mind control rays and the government putting poison in our butter. They're just wandering around and waiting to become useful; like discovering the advertising equivalent of a vast untapped oil field, then digging pipelines deep into it and sucking out all the sweet-sweet crude. Interweb advertising didn't work, but what about the legions of easily manipulated crazy people walking through the cities of America? Heck, even Pets.com might still be around today if it had been a crazy streetwalker and didn't pay that stupid puppet like 500 dollars an hour.

I think this move to put the insane and homeless to use is not only belated, but just the tip of the proverbial iceberg. With this new and rich resource to be exploited - and I am a big fan of exploitation - I have devised a number of new schemes to transform this segment of the population from zeros into heroes! I want to be the middleman for these crazy walking billboards, their agent so to speak, and I've already added a number of fine shambling nutjobs to my "stable." If you're in the need for some business exposure, just take a look at some of the quality candidates I've lined up to meet your marketing needs. 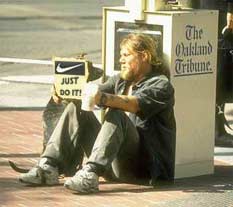 Description: Shakin' Joe smells like a blend of bacon, human feces, and pure grain alcohol. His eyes are a handsome mixture of blue and red and he constantly mutters about "the shit" that "the government" is spraying on us when they fly overhead in their "black jets". When he reaches a climax of muttering he will spin in place and scream as loudly as possible about the stinging chemicals that contain Yellow Number 5 and will eventually turn his testicles into enemies of the state.

What "Shakin' Joe" Will Not Do for You: "Shakin' Joe" will not shower or bathe in anything other than discarded cups of soda. He will not board an aircraft or advertise your business anywhere near an airport because this is the source of the "black jets". He will not use a microwave oven because he believes it will interfere with the government transponder that was installed in his brain when he was not drafted and was not sent to Vietnam.

"Shakin' Joe" Will Not Advertise for the Following: Dow Chemical, because he believes they invented the chemicals in the chem-trails. Arby's, because employees once threw him out of a franchise restaurant for urinating on a five-year old. Pepsicola, because he does not approve of their bathing soda "Mountain Dew" after an incident in which he was chased by bees for 8-blocks and got injured by a mounted policeman. 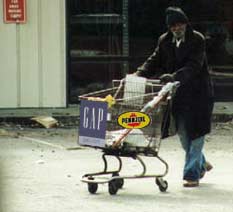 Description: The Brick Lady can bring a dynamic force to your marketing campaign. At 5'5" and 200lbs she is a fireball of energy just waiting to be unleashed as a part of your branding strategy. Her tangled and matted hair, three flannel shirts, and filth encrusted face and hands will bring a strong image of street-smarts and urban chic to your product line. She pushes around a shopping cart full of bricks that she has found or pried from somewhat unstable buildings. This shopping cart offers more space for your advertisements than any of our other crazy street people, and because it's easy to move she won't take time off to rest her blister-covered feet.

What The Brick Lady Has to Offer You: The Brick Lady will pick up bricks and possibly throw them at people who anger her. She will lose control of her cart and let it roll down a steep hill and into the side of someone's parked car. She will sleep in an alley with the cart tied to her ankle with twine so that no one steals your valuable marketing tools. She will attempt to prostitute herself to any passerby for a hot meal and your product.

The Brick Lady Will Not Advertise for the Following: Any government agency other than the Environmental Protection Agency. She believes that the EPA is run by sentient cat-people and is attempting to halt deforestation as an effort to switch to all-brick building materials. The rest of the government is run by sentient dog-people who wish to destroy the cat-people and build everything out of wood. If this is not clear to you, she would be more than happy to discuss it with you at length. 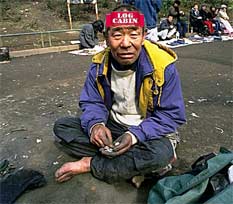 Description: Kamikaze Pete doesn't let concerns like personal hygiene get in the way of getting across your marketing message to the public. Pete is intensely proud of his Japanese heritage and would be happy to wear your corporate logo on his forehead while screaming "BONZAAAAAIIIIIIII" and running at random people in the park. Normally he just sits around in the dirt being filthy, but his keen eye and business acumen ensure that he is always placed where the maximum number of people will spot your advertisement.

What Kamikaze Pete Has to Offer You: Kamikaze Pete will yell the name of your company until he passes out in the street or is arrested. If he's arrested he'll continue yelling it in jail until he passes out and when he wakes up he'll yell it again until the jail wardens pepper spray him. He will beg for change, but all of the change goes to the pigeons that he throws coins at while screaming the name of your company. Kamikaze Pete will dig for potatoes in concrete. Kamikaze Pete will jump off a rooftop thinking he can fly, break multiple bones and promote your company in the charity ward of the local hospital. He will soon be back on his feet and on the streets, canvassing neighborhoods for your marketing needs because the hospital kicked him out when he kept shitting in the sinks.

Kamikaze Pete Will Not Advertise for the Following: McDonalds, because they are responsible for the fall of imperial Japan and dropping the atomic bombs on Hiroshima and Nagasaki. He will not advertise for Chili's because they promote violence against Asians and he will not promote any type of sandwich that does not contain beef for similar reasons. 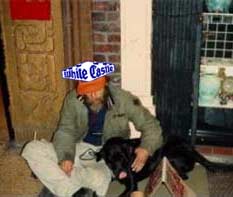 Description: Mad Mutt Matt loves dogs as they have proven to be a great companion and accomplice in uncovering the Byzantine plots of the Noturian invasion force. Matt enjoys taking his dog "The Dark Angel of Ash and Suffering" to the city dump where he will spend hours chanting "Logan said stop" to keep at bay the invisible assassins of the Noturian Hegemony. As a prime candidate for Noturian assassination, he makes an excellent platform for your next campaign to reach deep into the pocketbook of key demographics.

What Mad Mutt Matt Will Not Do for You: He will never, for any amount of money, endorse a product that contains the word "Noturia" or "Noturian". If you even ask him to promote these products he will try and strangle you with a filthy nylon windbreaker. Mad Mutt Matt will never take the dead mice out of his pants. He will never put out the fire when it spreads to his face just because you think it might be a good idea.

I think I've put together quite the starting lineup for this season's marketing blitz! This job is great because it's all about introducing one group of people to another group of people and letting happiness seal the bond between the two. Just look at our record some time with the Better Business Bureau... we don't have a single dissatisfied customer!

State Og Looks Ahead to October

Questionable corporate profiteers at State Og have released a new update to their web site. As usual this announcement comes with threats of violence against me, my friends, and my family if you do not read it immediately!

The times are crazy folks and that means it's time for a State Og TOTAL LIQUIDATION SALE!! Everything in our Sand City, Utah facility absolutely must go in the next week! What does this mean for you? Brain-explodingly good bargains and groin pulsingly low prices!!! Your jaw will fly off and shoot into the sun these prices are so good!! Your eyes will bug clean out of your skull and rent a new skull in Florida and not EVEN WRITE HOME!!!! 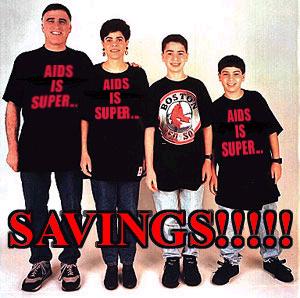 Please read this update, I really don't want to die yet.