A better tomorrow my ass!

China is a country steeped in tradition. Secluded from the progress of the rest of the Earth by a strict communist regime, it has marched on down its own path while the rest of the world worries about Project Blue Book and faked moon landings. Actually that's just Art Bell. Still, I was glad to hear that China still hasn't forgotten how to make their things run into things from other countries. That's right folks, when shooting somebody might provoke a third world war, the Chinese decide to crash a fighter jet into a US surveillance aircraft just to get a look at our futuristic turbo prop technology. Never you mind what our innocent surveillance aircraft was doing near China; I am sure they were just defending our world wide national interests.

You really have to hand it to the Chinese for getting their pilots to do just about anything, no matter how stupid. Despite the fact that my experience with Chinese etiquette is limited to Jackie Chan and John Woo movies that aren't technically Chinese, I will try and reconstruct the radio conversation between the Chinese fighter pilot and his superior at the air base. This reconstruction is based on actual radio transmissions intercepted by some fictitious government shadow agency I heard Art Bell mention, and the movie "Top Gun," which was like "COPS" only in midair and with less police officers.

Pilot: "This is Goose, I have a visual on what appears to be an American surveillance aircraft."

Pilot: "Say again HQ. You want me to shoot them down?"

Superior: "Well…ummmm…actually…no, you can't use any missiles."

Pilot: "Should I close to gun range and take them out with cannons?"

Superior: "Yeah, uhhh, you see that's the thing. We can't have any shooting on this one. Do you think you can ram them?"

Superior: "You don't think so what?" 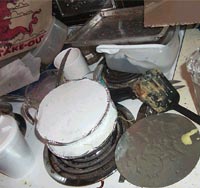 Oh yeah baby, just look at that, crusted all over the spatula and UNNNNH the congealed grease!I had a nightmare last night about entering the sultry mucus filled underground of sneezing fetishes and I have no one to blame but Fragmaster and his beloved Fireman comics. I think the reason Kevin's choice of Awful Link of the Day disturbed me was the idea that there are fetishes out there that can be fed into during normal day to day life. It's difficult enough knowing that people practice some of the offbeat fetishes that exist in the privacy of their own homes. To think you could be at Best Buy picking up your Collector's Edition DVD of "Chairman of the Board" and unknowingly providing someone with sexual gratification by sneezing opens up another world of paranoia for me to immerse myself in.

What other fetishes might exist that have people taking advantage of us in public without our knowledge? Drawing on my extensive data of fetishes and my own personal interest in "subway grab ass," I put together a short list of a few fetishes you might fall victim to while going about your business. I am also providing a brief quote from a fictional web site endorsing each fetish. Bear in mind that many of these are purely hypothetical, so please let me know if you start practicing them so I can come take pictures and sell them back to you at a ridiculously inflated price.

Tobacco Spitting Trucker Fetish - I was driving down I-75 southbound Thursday and I passed a somewhat slow moving big rig. I always try to pass slowly, just in case I luck out and the driver is chewing tobacco. It turned out to be my lucky day and just as I was near the cab of the truck, the window came down and the trucker craned his head out. I worked to keep the wheel steady, watching as his lips contorted and then expelled a wet brown plug of used chaw. The brown fluid was caught in the erotic slipstream and impacted against the trailer, smearing three feet of brown stain across the side. Needless to say I had to get off at the next exit and compose myself.

Dirty Plates Left At Restaurant Fetish - My wife and I were sitting in the non-smoking section at a Denny's. We were seated near a young couple with two children, one maybe five years old and the other two or three. Just after our drinks arrived the family paid their check and left. I could feel the anticipation building in my groin. They moved out of the way and my view to the plates they left behind was unobstructed. Mounds of unfinished mashed potatoes smeared around one with gravy and butter, half eaten biscuit adrift in a sea of peach cobbler. Their silverware was filthy and the kids had obviously played with their food. It was hot. I was so turned on that I had the best sex of my life that night when we got home. My wife even let me make love to her in the kitchen.

Short Sleeved Shirt Fetish - Friday came and when I got to the office I was in for a hot surprise. I had completely forgotten it was casual day and when I came in the door the receptionist looked up at me and smiled. She was wearing a short sleeved Abercrombie and Fitch t-shirt. I'm sure I walked past her a bit funny, holding my briefcase in front of my crotch. It wasn't until I went through the door into the main office that I realized what a sexy day I was in for. Everyone was wearing short sleeved-shirts. I barely managed to get to my cubicle before I had to unzip my pants. This was hotter than any Gap commercial!

Clean Factory Floor Fetish - Okay, I found a great source for hot CFF videos! For all you other Clean Factory Floor lovers out there, there is a great company that is essentially a clearing house for industrial promotional videos. They have the infamous General Electric Detroit Plant video that has all of us talking and even the hard to find Freshcut America plant opening promotional video. They will never get that place clean again, so this video is the hottest action you will ever see. For those of you who like your CFF on computer I am archiving the interactive tour of the Ratheon Redwood Assembly Line, it is incredible. Especially hot is the R&D clean room, you can actually see the camera crew reflected in the floor!

People on Electric Scooters Due to Obesity or Illness Fetish - Sometimes when I am masturbating at night I like to imagine an immensely fat man on a Rascal Model 450 electric scooter being chased by two thinner elderly men on Daewoo Model 23-C electric scooters. As the chase progresses the fat man becomes increasingly sweaty and strained, the inferior Rascal complaining beneath his bulk. Just as the two elderly men are about to catch up to him I roll out of an alley on my Hyundai 950 gas-electric scooter, the new one, my hair flowing behind me. Usually I imagine I have multiple sclerosis as I drive circles around all three of them, grinding against the seat. Afterwards we all collapse on the ground, twitching and sweaty, in an orgasmic heap.

Actually I am starting to get turned on so I think I am going to end this right now. If you have any additional fetishes I should add, please contact me immediately, because this is very important in my burgeoning journey of self discovery.

Jeff K. is Out to Getcha

Jeff K., who has been on a hiatus for some time now, is back and in action with his latest column, "A LOOK AT TEH UPCOMEING CONSOUL WARES!!!!!!!!1", which compares the Playstation 2, Nintendo Gamecube, and Microsoft X-Box. Well, at least that's what I assume the column is about.

there are not maney games for teh Platstaitan 2 becuase nobody lieks too program for it becuase Snoy WONT TELL ANYBODY HOW THERE CODE WORKS!!! TRADE INDUSTRY SECRAT!!! teh programmers sends an emale to Snoy asking "Please Mr. Sony, tell me how to make teh color green" and then they get an emale back saying "GO FALL OFF TEH EARTH, DINOSAUR JERK" becuase Snoy only wants movies to be made fro teh Playstatian 2, not games. thats why it palays DVDs and FINAL FANTAPESTRY 13561 witch si just a movie about transvestiets with HATS/ also all teh games flicker and look liek turds because Soney wants a TRIPPY EXPERIENCE for teh druggies.