How Did You Celebrate Autism Day?

Yesterday CNN transformed into the autism channel as every CNN personality was forced to help "Unravel the Mystery" about the disease. Move over cancer, autism has hit the mainstream! Somewhere out there all the cancers are getting together and reading TV Guide and saying, "TV Guide's new Hot or Not article is out!" Breast cancer asks, "Are we hot?" to which prostate cancer replies, "We are not." Autism is hotter than Hannah Montana these days and has plans to tour the country, visiting a child near you very soon! 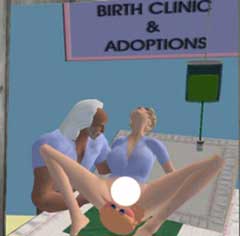 According to CNN, this is relevant.CNN and CNN.com celebrated by airing and running special autisim-related content all day yesterday. Every show had to have at least one autism story. Dr. Sanjay Gupta reported on autism and the next president. I think I heard that one of Eliot Spitzer's whores was an "autie". Anderson Cooper even got into a steel cage and was submerged underwater while autistic kids circled around him, trying to bite through the cage. Oh, and of course, there was the obligatory Second Life article. Naughty Autie is the hip place to be. Dress casually. Adult diapers optional.

But I'm not here to make fun of autism. It's a fucked up, downright scary disease. Your baby pops out looking all normal and you don't know if your kid is going to be autistic until you find him alphabetizing all your DVDs and playing Beethovens Symphony No. 9 with one hand while simutaneously kicking the shit out of the dog for no reason. CNN reports that when the genes that cause autism are identified, it would become possible to screen for those genes before birth. Of course, they don't mention what that information will be used for. Gee, I wonder.

Of course, where there's autism, it's younger, less popular brother isn't far behind. That's why it's not at all surprising to see Asperger's Syndrome riding autism's coat tails once again.

I don't quite understand small talk, and early in my adult life, solecisms were frequent. At meetings, I launch into business without the expected social acknowledgments. It's not that I don't care about people, I am just very focused on task. Do you have to rehearse greeting people to reinforce that you should do it? I do.

Are you shy? You've got Asperger's! Are you socially awkward? You're an "aspie"! Need something to blame all your failures and faults in life on? Have I got a disease for you! Don't rush to the doctor. I've got all the information you need to diagnose yourself right here.

Is it difficult to make eye contact with others?

Can you memorize large chunks of data that aren't related to work or school, like subway schedules and entire episodes of The Simpsons, allowing you to recite them from beginning to end?

Can you not concentrate at work because you're worried about your fantasy baseball draft?

Do you know how to navigate mass transit systems you've never actually ridden on?

If you answered yes or no to any of these questions then congratuations, you've got Asperger's!