This article is part of the Memos from Bear Cave series.

Manuel Rodriguez informs me some of you have opted to use your sacks from the sack races as a toilet. If that's how you're going to behave in public, you can wear your sack for the rest of the day. I want all your coworkers to see and know what you've done.

As some of you brought your obnoxious little children along, I have arranged for some child-friendly amusement. Tall Charlie will be releasing some clowns into the surrounding woods shortly, and they will come running out to surprise your kids.

Nobody better warn them either. I want to see the looks on their faces.

I have personally observed a number of you purposefully avoiding Bouillon. If my dog wants to be petted or share your food, you damn well better comply. I like having him around a lot more than any of you, and could easily replace you.

You will treat Bouillon with respect and give him all the attention he demands.

I've had about all I can stomach of you knuckleheads, so I'm going to the Bouncy House. As per Friday's memo, this event is intended to last from 6 am to 6 pm. I expect all of you to put in your time. Ðâng Lành is still on the clock. If any of you attempt to leave early, I'm sure I'll read about it in the paper tomorrow morning.

I'm putting the padlock on the Porta-John, so either hold it in or find a spot in the woods. Just watch out for traps.

THE VERY NEXT MORNING: 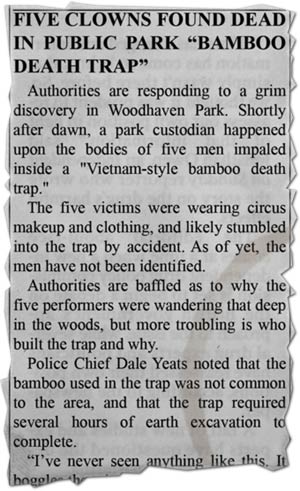