This article is part of the Forgotten Origins Of Comic Book Characters series.

The history of any given comic book character is subject to change. Writers are constantly reworking superhero origins to fit current story arcs, to ditch the trappings of an older era, or just for the chance to work another sweet Stephen Colbert cameo into their book.

Sometimes history is rewritten for no good reason at all. I'm pretty sure the DC universe has imploded and started over once a year since the 70s. The first time gave them a chance to change The Flash's outfit, and the following 30+ reboots were out of habit.

With so much of the past being swept under the rug, the true origins of many characters have been forgotten. You may think you know how your favorite hero or villain came into being, but more often than not you'd be wrong. 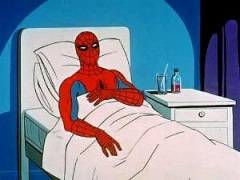 Peter Parker, a brilliant but shy high school student, went on a field trip to the New York Bug Hospital. As the empathetic youth reached out to comfort a spider that was recovering from a round of chemotherapy, the weary arachnid bit Parker's finger.

In that fateful moment, Peter Parker became the Sickly Spider-Man. He found himself able to lay in bed and nap with the strength of a hundred napping men. His newly developed Spider Sense triggered a sneeze every time a germ drifted nearby. He was able to catch colds and flus with the nimbleness of a spider.

With great sickness, however, came great responsibility. In order to protect his loved ones, Peter donned a costume, keeping his illness contained.

Aqua Fish was a fish... that lived underwater. He was able to communicate with other fish and gather oxygen with his gills. He came from a fish egg.

Super Friends #2
After a mysterious foe pins the team to the ocean floor, time begins to run out for our heroes. Quick-thinking Aqua Fish blinks his glassy eyes and darts away from Visible Superman's kicking feet as the hero convulses in oxygen-starved agony. 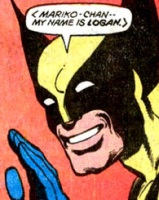 Deep in the Canadian wilds, a surly man with a mysterious past wandered into a top secret facility. Captured and experimented upon, this diminutive wanderer was forged into a human weapon.

Before he could be trained, however, his rage-fueled instincts took over and he made his escape upon a wave of destruction.

Leaving behind his old identity, he embraces the primal nature that has risen to the surface, naming himself "Wolverine (Without Claws)".

Uncanny X-Men #4
Wolverine (Without Claws) acts like a dick, telling the X-Men that he's a loner and he doesn't need them. He storms off, rides his motorcycle away, and is captured by ninjas. When the X-Men save him, he criticizes their performance and explains how much better he would have fared if he had claws. 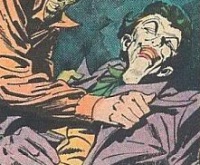 While conducting a highly illegal meeting of criminals in a warehouse, master criminal fell into a vat of acid. As a result, his features became twisted into a horrific smile and his skin's pigmentation was shocked, turning pure white. Also, he died.

Dead Joker went on to become Bad At Math Batman's arch-nemesis, constantly throwing a wrench into the caped crusader's plans.

Autistic Batman #11
During a heated battle with Racist Catwoman, Bad At Math Batman stubs his toe on the Dead Joker's gravestone.

Comic book history is constantly being rewritten. Your favorite characters have gone through countless iterations, their true origins long forgotten. Until now.